In preparation for 2022 Mr. Olympia, Hadi Choopan annihilated his lower body with a brutal FST-7 leg workout led by his coach Hany Rambod. 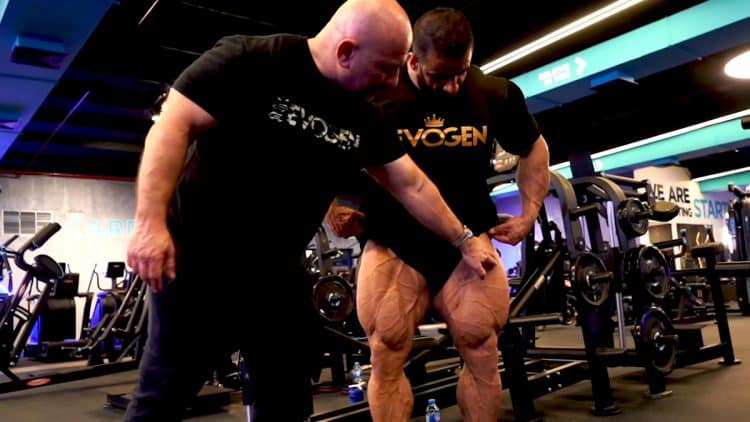 Bodybuilder Hadi Choopan is pushing his limits once again to become a Mr. Olympia champion. In a recent video, Choopan joined his coach Hany Rambod for a brutal FST-7 leg training session as preparations for 2022 Olympia heat up.

Hadi Choopan is known for never missing when it comes to presenting a conditioned physique at Olympia. His consistent ability to enter the show peeled has made him a threat since his first showing in 2019.

Despite the result, many fans and figureheads argued that Choopan’s muscle density and detail should have earned him the victory. In fact, seven-time winner Phil Heath believes if Ramy has a similar physique to last year, Choopan or Curry could take his crown in four weeks.

In preparation for the marquee show, Choopan’s coach Hany Rambod revealed that Hadi is bringing a next-level physique. One priority for Choopan this season has been adding muscle mass without sacrificing detailed separation. In Sept., Rambod teased that Choopan was in the best shape of his life. With time dwindling until the biggest show of the year, Choopan showed off his latest leg day workout.

Choopan joined Rambod for his signature FST-7 leg training session. Rambod’s Fascia Stretch Training (FST) is a program typically utilizing exercises in sets of ‘7.’ In most circumstances, this method of training is used to target specific body parts.

Choopan warmed up with barbell rear and front squats.

Focusing on contractions, Rambod guided Hany through each rep.

“Now we’re going into a belt squat, so on the belt squat, we’re making slight adjustments with foot position throughout the sets but what we want to do is really focus on making sure to get the contraction, keep the tension on the quad,” says Rambod.

After showing off his leg pump, Choopan moved on with a few sets of leg presses.

“The Persian Wolf’ taxed his lower body with a number of walking lunges next.

Choopan finished his workout with three sets of hip abductors.

“We just got done hitting legs with Hadi Choopan,” says Rambod. “He just did quads and really focused on a lot of the squats. He was on his legs all day long shaking hands kissing babies literally and now he came in at 11 o’clock at night and is doing legs. This is what it takes.”

After the brutal workout, Rambod shared that Choopan is on track for a successful show next month. After arriving in America a few weeks ago, Hany said Choopan has ‘grown tremendously’ and believes his ‘x-factor’ will push Big Ramy on the Olympia stage.

Rambod has high hopes for Choopan who is expected to perform in just one month. If Choopan shows the judges improvements from last year’s package, many believe he will be the one to push Big Ramy in December.