It's definitely not for everyone but if you can learn to do the handstand push-up, it can be the best bodyweight shoulder and upper chest exercise you do. 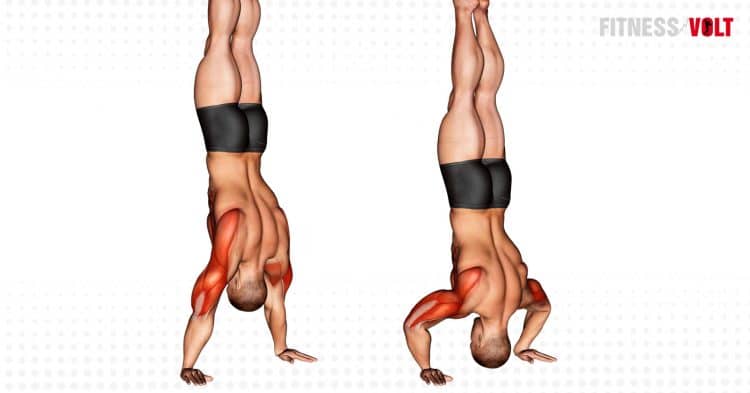 Most people do overhead press variations and isolation exercises to train their upper body pushing muscles (e.g., triceps, shoulders, and chest). But there’s one bodyweight exercise that’s very overlooked and that will challenge even the strongest of humans… that’s the handstand push-up.

Now, it’s not for everyone as you do have to be able to lift your legs overhead and press yourself up from an upside-down position. But for those who are capable, it makes for a superior exercise that you can do almost anywhere.

In this guide, we’ve explained how to do it with variations, tips, and more.

This muscle is involved in arm flexion, stabilizing the arm while the deltoid lateral abducts the arms (raise the arm away from the midline of the body).

The handstand push-up involves a lot of front deltoid.

The deltoid lateral also helps to stabilize and prevent displacement of the glenohumeral joint while the arm is pressed against the body.

When developed, this muscle gives width to the upper body.

Elevating the feet during any push-up allows us to place more of an emphasis on this muscle.

The sternal head is the lower portion of the chest. It causes extension of the flexed arm.

The serratus anterior also commonly called the “boxer’s muscle”, is a fan-shaped muscle located along the outer ribs between the pectoralis and latissimus dorsi muscles. it’s actually divided into three parts.

The teres major is also a rotator cuff muscle that’s located on the underside of the upper arm near the teres minor. It helps to stabilize the upper portion of the humerus, medially rotate the humerus, and works with the lats to move the humerus back and down when extended.

How To Do A Handstand Push-Up

The handstand push-up is more of an advanced movement which means you should already be able to do a handstand if you are to safely and effectively perform this exercise.

If you can hold a handstand then you’re most of the way there but here’s a basic guideline of how to do it.

Read: 13 Ways to Avoid Shoulder Pain in The Gym

How To Incorporate Handstand Push-Ups Into Your Training Regime

The handstand push-up is simply an exercise that you’d do to train your shoulder and triceps muscles.

That means you’d treat it like any exercise. Therefore, if you had limited resources, you could do this exercise only to maximize the challenge of training your shoulder muscles. But it’d be better to include it with your other shoulder exercises.

Because it’s technically a shoulder press variation, you may not want to do a lot of other overhead presses in addition to it, especially if you do pressing movements several times per week.

But how you incorporate it really depends on your goals because if you’re training just to get better at this movement, then practice makes perfect.

We recommend anywhere from 2-3 sets to a few reps shy of failure for safety, or if you’re more advanced, you can go to failure.

But there’s no right answer to this as again, your goals will determine how you want to use it.

The handstand push-up is a challenging exercise and there’s no doubt about that. However, it’s also extremely effective for building up the upper body muscles and overall fitness.

There are ways to progress into the handstand push-up as everyone has to learn it at some point. But for those who want to hop right in, we hope you found these tips helpful.

Burpees need no introduction. Most people know them as the exercise where the soul leaves the body for the duration...

10 Fitness Tests Every Man Should Be Able to Pass

Fitness can be defined as the successful adaptation to imposed demands, and your fitness is specific to the type of...

David Goggins has been called the toughest man alive. Few people would be foolish - or brave - enough to...