Rambod talked about preparing Choopan and Lunsford backstage at 2022 Olympia: 'it was just like when I trained Jay Cutler and Phil Heath in 2011.' 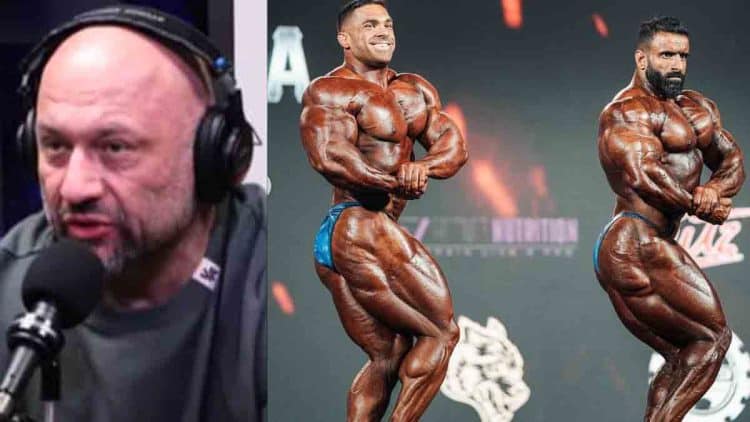 The bodybuilding community is still processing the exciting outcome of the 2022 Mr. Olympia contest. In a recent podcast, coach Hany Rambod reflected on the ‘simple and fair’ training process he used to guide Hadi Choopan and Derek Lunsford to success last month.

“I don’t look at it like this person is going up against this person. It’s always what is the best version of that person that you’re trying to bring in,” Hany Rambod shared.

Leading up to the 2022 Mr. Olympia contest, one of the biggest wild cards was former 212 Olympia Derek Lunsford. Before talks of moving into the Men’s Open division, he made headlines after guest posing at the Pittsburgh Pro show. He posed next to Brandon Curry, Hunter Labrada, and Nick Walker without looking undersized.

Last Sept., Lunsford accepted a special invitation to compete in the Men’s Open division at 2022 Olympia. Initially, the invite was being held for bodybuilding legend Flex Lewis, but Lunsford didn’t waste the opportunity. At his first ever Men’s Open Olympia competition, he earned runner-up to Hadi Choopan. By the end of the night, both of Rambod’s pupils earned first and second place.

Speaking in a Q & A segment, Rambod discussed the nuances of training two top-tier Men’s Open athletes simultaneously. In addition, he recapped the 2022 Olympia and shared details regarding backstage preparations at the event.

Rambod compared coaching Hadi Choopan/Derek Lunsford at the same time to when he trained former Olympias Phil Heath and Jay Cutler together from 2009-2011. Despite coaching multiple athletes, Rambod underlined that his goal was the same each time: bringing each individual athlete in at their best.

In prep and during live shows, Rambod focused on each individual’s strengths and weaknesses.

“I would focus on their strengths and weaknesses individually,” says Rambod. I’ll give you a little example of that. For Hadi [Choopan] – I was hoping him and Derek [Lunsford] would go one and two.”

Prior to the Olympia event, Rambod was unsure of Derek’s potential since Mamdouh ‘Big Ramy’ Elssbiay entered the contest as a massive favorite. In addition to perennial contenders William Bonac and Brandon Curry, Rambod mentioned new threats like Andrew Jacked, Michal Krizo, and Samson Dauda were on their radar.

“But before that, we’re talking about Big Ramy who had won twice, so he was the frontrunner, by all means, everyone thought he was going to go in there and crush because most people — especially after you’ve won one and you get to two, you start to really build momentum. Everybody thought he was the frontrunner including me, because he had won two.
You had guys like William Bonac who had been in the top five many times. You had Brandon [Curry] who had won already in 2019 and was coming back. You have Nick Walker who’s building momentum, who was top five last year in his first Mr. Olympia competition. You had Hunter Labrada — same thing. So you have all of these people and then you have question marks like Andrew Jacked, [Michal] Krizo, Samson [Dauda] — all of these new up and coming guys who were building a tremendous amount of momentum,” Rambod explained.

Rambod Recaps Backstage Experience at 2022 Olympia: ‘The Goal Was To Balance Fullness and Conditioning’

While food and beverages were available for athletes, Rambod told Lunsford not to take anything backstage at 2022 Olympia. He clarified that the goal was to balance conditioning and fullness for both of his athletes.

“The way that [the food and beverages] are sectioned off [backstage at Olympia] is chosen based on what the body looked like two or four hours at the previous check-in. So, they’ll have it backstage. Derek had it backstage as well. We’re looking at it, and I told Derek, ‘no man, you don’t need to take anything. You’re straight, you’re good to go.
If Hadi feels like he’s flattening out a little bit or if I see something, I tell him to take a half scoop, or a scoop of this and mix it, and take a little bit. It’s all about trying to balance your fullness and conditioning for any given athletes and where they are at with their dryness. You can be dry and flat and it makes you look like your watery if you’re too flat. So, you have to really balance it out. Everything is about pushing; everything is about trying to get that 3D look but what happens is you’re going to look spilled over.”

Fans continue to call on Derek Lunsford to compete at the upcoming 2023 Arnold Classic. While Derek or Hany haven’t confirmed or denied his entry, the bodybuilding community would love to see another battle between Derek and Nick Walker. ‘The Mutant’ jumped into the contest yesterday and will aim to capture a second Arnold Classic title after taking the honor in 2021.
RELATED: Hany Rambod on Big Ramy’s 2022 Olympia 5th Place Finish: ‘His Physique Looked ‘Faded/Watery’
With Rambod in Derek’s corner, many expect another big season from the former 212 Olympia winner. Should Lunsford make a surprise announcement, he will have the chance to compete for a record $300,000 in Columbus, Ohio at the 2023 Arnold Classic.