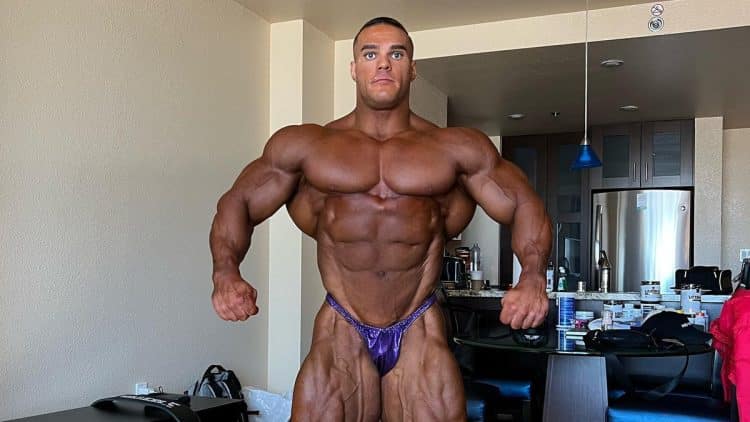 Bodybuilder Nick Walker turned in a fantastic season last year and appears set to extend his successful run as an IFBB Pro. In a pair of recent posts, Walker and the Arnold Sports Instagram announced ‘The Mutant’ will compete at the upcoming 2023 Arnold Classic.

The 35th edition of the annual Arnold Sports Festival is scheduled for Mar. 2-5 in Columbus, Ohio. The organizers revealed the full lineup of each division for the nearing competition.

It appears reigning champion Brandon Curry will not be on stage to defend the title. Men’s Open standout Samson Dauda, who finished sixth at the 2022 Mr. Olympia, will look to leave his mark on the second most prestigious contest of the year. Although rising sensation Blessing Awodibu was also on the roster, he withdrew earlier this week to give his body time to recover before going into prep.

Nick Walker gained attention for his massive size and symmetry in 2021. He kicked off the season with a dominant win at the New York Pro before winning the Arnold Sports Festival. He made his Olympia debut the same year and placed fifth.

‘The Mutant’ got to work in the off-season and came back with a vengeance. His physique updates during the build-up to the Olympia showed that he made significant strides since his last appearance, with a slimmer waist and a more pronounced v-taper.

In the end, Walker improved his standing to third place, behind runner-up Derek Lunsford, and 2022 Mr. Olympia champion Hadi Choopan. Following the stunning performance, Walker stated that he would not compete at the 2023 Arnold Classic but did not completely shut the door on the possibility of his return.

In a recent post made on Instagram, the organizers announced Nick Walker will compete at the upcoming 2023 Arnold Classic.

“THE MUTANT IS BACK! We are thrilled to announce that our 2021 Arnold Classic champion @nick_walker39 will once again be making his way to the stage in Columbus, this time in attempt to regain his title against a formidable field of some of the IFBB’s best competitors!”

Nick Walker’s addition to the lineup adds the much-needed flair that many believe was missing. Considering the lack of contenders on the roster, many have spoken out on the need to have more athletes in the Open division for the show.

Former Olympia winner Samir Bannout believes there needs to be at least 18 to 20 competitors at the 2023 Arnold Classic to make it a good show. He called on Derek Lunsford to make a surprise entry along with Hunter Labrada. The organizers also increased the prize money to a record $300,000 for the winner of the Open category.

Now that Walker is confirmed for the contest, there is a chance more competitors will follow in his footsteps to win one of the most important bodybuilding shows of the year.