Rambod spoke with Dennis James about Phil Heath possibly returning to Olympia: 'he's got the mindset, the genetics, the hard work, he knows how to execute a gameplan.' 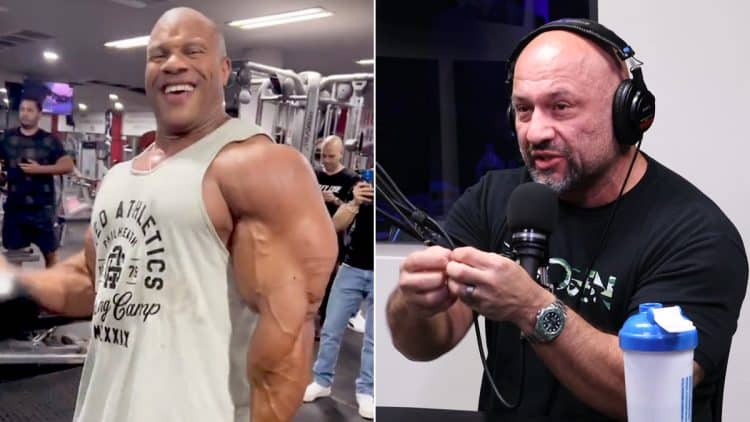 Hany Rambod is responsible for coaching a number of high-profile bodybuilders, like seven-time Mr. Olympia Phil Heath. During a recent episode of The Menace Podcast, Rambod and Dennis James discussed what it would take for Heath to return and compete at another Mr. Olympia contest.

While fulfilling his duties as a coach, Rambod has worked with a number of notable bodybuilders such as four-time Mr. Olympia Jay Cutler, consistent top three Olympia finisher Hadi Choopan and reigning 212 Olympia winner Derek Lunsford. His insight is sought after by many active bodybuilders in the IFBB Pro League, including retired pros as well, like former Women’s Physique Olympia champion Dana Linn Bailey.

Last month, Phil Heath revealed that he would be commentating on the 2022 Mr. Olympia contest later this year, instead of competing at the show. Prior to the announcement, many fans were left in suspense because there were some signs pointing to Heath returning to the big stage.

Earlier this year, Phil said his chances of returning to the Olympia stage stood at 5%. According to his friend and predecessor, Cutler, Heath is done with competitive bodybuilding. Despite many dismissing a return, his long-time coach, Rambod, spoke about Heath’s chances of coming back to earn that elusive eighth Sandow trophy.

During the round table discussion, Rambod weighed in about Heath possibly making a comeback.

“Could he come back? Absolutely. Could he win, I think the hardest thing is that he would never, I don’t think he would end up looking at it like… can Phil beat this guy or this guy, it’s can he beat his best. Because when you do this and you come back like with Jay Cutler in 09, you have to come back and be your best ever to be able to win again after losing. There’s only one bodybuilder who has ever done it so far and that’s Jay [Cutler] in 09.” Hany Rambod said.

He stressed that so far only Cutler has been able to regain a title lost at Mr. Olympia in the show’s long history.

“No other Open bodybuilder has ever lost and won again, not to this day. I think that he [Cutler] was just so impressive. For Phil, what I would do, if we ever had that conversation — it would be, could we get you to look like you did at your best.” Hany Rambod told Dennis James.

Rambod acknowledges that Phil Heath winning an eighth Sandow would be a ‘difficult’ task but not impossible.

“I think Phil obviously is a phenomenal athlete, but do I think he can be as good as he ever was? That’s really difficult to do. I mean I never say anything is impossible, but I think it’s very very difficult. I’m just speaking being honest here because you know… look at how many years he went on that run.” Rambod said.

Hany insists the greatest challenge is Heath having to compete against himself. In order to win another Olympia contest, he believes Heath would need to bring a physique that is arguably better than all of his past looks.

“I think I agree with you but it’s a matter of would he want to do that? That’s the question. When you win the Olympia once or twice… that’s good. But when you sustain greatness and try to go in there and beat prior versions of yourself… THAT is what makes them a whole different level.

For most athletes at Olympia, bringing improvements year-after-year fosters success.

“This is what they are going to do. You’re always going after that one person that is not standing next to you is the first person they will compare yourself to. Your other prior versions of yourself.” says Rambod.

Rambod Talks Phil Heath’s ‘Assassin’ Mindset: ‘He Knew Exactly What We Needed to Do; He was Like Terminator’

If Heath were to return to Olympia, Rambod said he would commit 100% because Phil is accustomed to game planning for bodybuilding shows.

“That’s what you have to do. It’s just a matter of what you said, is Phil willing to do those things. If he is 100%, because he’s got the mindset, the genetics, the hard work — he knows how to execute a gameplan because that’s what he’s done his whole life.

He became a bodybuilder, and he was a person that knew exactly what we needed to do. When to turn it off, when to back off, he was a machine. He was like terminator. He would go into that assassin mode and wanted to go out there and do it. He didn’t have that at the beginning.” Rambod explained.

“Phil, he didn’t have the confidence that he had later on because he was just happy to be up there in the first call out. I ended up having to literally go backstage right after pre judging and told him, ‘get your shit together because if you don’t, you’re going to lose this show.’ He went from excited to being in the first call out to, ‘oh my coach is concerned.'”

When discussing Phil Heath’s best look, Rambod is confident the physique “The Gift” brought to secure his 2013 Mr. Olympia victory was one of his greatest.

“2013 Mr. Olympia. That was the show where I felt like he had the depth in his muscles where I think to this point, it was still pretty unrivaled. He had one call out and then they put him back in line and that was it. It was one comparison and that was it. Because he had the fullness, the conditioning, he had the conditioning of 2011 with added size. I felt like that’s where he really closed the door behind him, in 2013.”

While Phil has made it clear he will be serving on the broadcast team for 2022 Mr. Olympia, the bodybuilder turned heads recently with a massive update. Even though he hasn’t competed since 2020, Heath’s upper body, especially his arms, look huge. The 42-year-old was hitting some dumbbell curls and wrote, “I ain’t done yet, I’m only getting started.”

With a long history of working together, Rambod is confident Phil Heath would have the mental fortitude necessary to make a return. Following a fruitful discussion, Hany Rambod believes Heath’s road to an eighth Olympia title would hinge on bringing one of his best looks ever.