The deadlift rivalry will finally be settled when Hafthor Björnsson and Eddie Hall meet in the boxing ring. 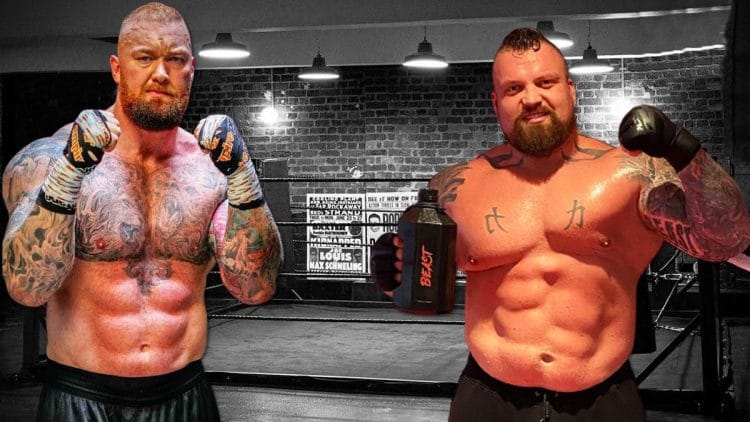 With less than one month until Hafthor Björnsson meets fellow former Strongman Eddie Hall in the boxing ring, animosity behind the marquee bout is climbing to an all-time high. On Thursday, Feb. 24, 2022, Segi TV announced a partnership with Core Sports World and will now live stream the boxing match free of charge.

Dubbed as the ‘heaviest boxing match in history’, the pair of former Strongmen will put on the boxing gloves and handle their business once and for all. The rivalry’s flame is still burning strong, and both men are looking to make a statement come fight night.

After Eddie won the 2017 World’s Strongest Man contest, Thor felt that Eddie cheated him out of the win. After Thor set the all-time world record of 501kg in 2020 on the elephant bar deadlift, he broke Eddie’s record by two pounds. Ever since, the two former Strongmen have been on a collision course.

Earlier this month, the highly anticipated showdown received a date and location. The boxing match is set to take place on March 19, in Dubai UAE. In addition, the venue was announced, and the Dubai Duty-Free Tennis Stadium will play host to the pair of former Strongmen-turned-boxers in just a few weeks.

How to Watch Thor vs. Eddie (Live Stream)

As aforementioned, the boxing match will be available on an exclusive live stream with Segi TV on Saturday, Mar. 19, 2022, at 8:30 p.m. local time/4:30 p.m. EST/1:30 p.m. PST. Fans can start getting excited as the night of fights will be free and have no sign-ups or subscription required to view the event.

Watch Now, Road to the Ring and Weight in:

“Segi.tv on Instagram: “🚨🚨BIG ANNOUNCEMENT!! Who wants to watch Eddie VS Thor for free??😊😊 – We’ve partnered up with @coresportsworld to bring the fans this long… Exclusively on www.segi.tv.
– Are you team Mountain or Beast??
💥🥊” Segi.tv shared.

The two were linked to fight a while ago, but Eddie was forced to pull out due to a bicep injury. Thor intended to stay active and instead opted to fight pro-arm wrestler, Devon Larratt. The 2018 World’s Strongest Man delivered and scored the TKO in round one.

In preparation for the fight, Hafthor has slimmed down and has shown himself to be quite agile. In a recent share on social media, the Game of Thrones star practiced a variety of uppercuts and looks to be in tremendous shape. Meanwhile, Eddie Hall has also been sharpening his hands inside the gym. Just last week, the 2017 WSM made it a point to emphasize that he will be coming in heavy for the contest against Thor.

Tipping the scales at 343lbs for the boxing match, Eddie Hall has stressed that he will properly use his weight to deliver fight-ending power. While preparing to fight Thor, Hall utilized what he called a ‘Full Boxing Strength Session’ which mostly consisted of arduous strength and conditioning exercises.

The deadlift rivalry will finally be settled next month. As March 19 continues to inch closer, fans can watch the ‘heaviest boxing match in history’ live and free with Segi TV.