Hafthor Björnsson is looking sharp and explosive ahead of his blockbuster fight against fellow former Strongman Eddie Hall. 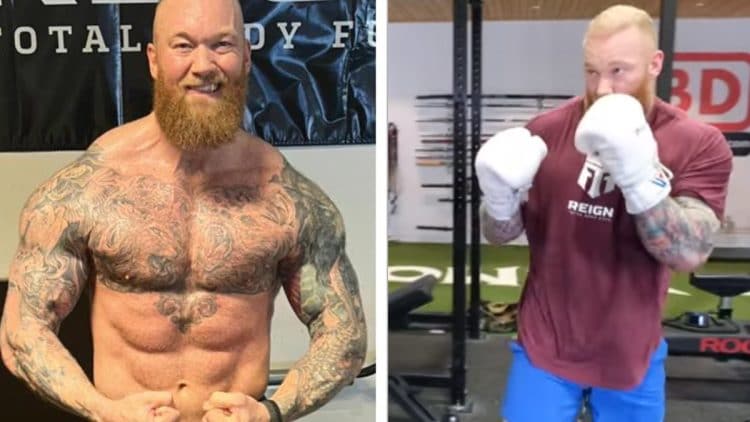 Hafthor Björnsson and Eddie Hall are slated to meet in their highly anticipated boxing match on March 19 inside of the Dubai Duty-Free Tennis Stadium, in Dubai, UAE. Hafthor Björnsson recently shared a video of him sharpening his hands and is looking to put this rivalry to bed once and for all.

In preparation for his fight with Hall, “The Mountain” has undergone a dramatic transformation to his physique to facilitate a successful transition into boxing. The beef between Hall and Bjornsson has been building for years, and it’s just getting worse. It all started on the strongman field, with Thor feeling and vocalizing that Eddie had cheated him out of a win at the World’s Strongest Man, but it only became worse after the Icelandic champion snatched Eddie’s world record deadlift.

While the two Strongmen were linked to a fight a few years ago, after some time, Eddie Hall was forced to withdraw and cited a bicep injury as his reason for pulling out of the contest. Nevertheless, Thor intended to test his boxing skills and the superstar did just that after taking his first non-exhibition boxing fight against Devon Laratt. The Icelandic titan secured the emphatic first-round TKO victory. With a leaned-down physique, fans are counting down the days until the two Strongmen meet, and it looks like Halfthor is doing the same.

With over 3.8 million Instagram followers, “The Mountain” broadcasted one of his recent boxing sessions for his fans and it looks like he is packing a lot of power. The Game of Thrones star is seen practicing uppercuts in the video he shared on his Instagram page.

Thor hasn’t left anything up to chance for his boxing fight with Eddie Hall. During his training camp, the 2018 WSM has gotten a lot of looks, especially from some top talent in the boxing world. In Nov. 2021, Thor grabbed headlines everywhere after trading body shots with the former unified lightweight champion, Teofimo Lopez. If that wasn’t enough, the former Strongman also got work in with the lineal heavyweight champion of the world (unified WBA [Super], IBF, WBO, IBO), Tyson Fury.

Meanwhile, Eddie Hall recently shared a clip of his boxing skills and made it a point to mention that he will most certainly be coming in heavy for his contest against Thor. The 2017 WSM mentioned that he is tipping the scales at 343lbs and plans to deliver fight-ending power against Hafthor when the two meet March 19. Following his boxing video, many fans called out Hall for not having his hands up guarding his head after punching.

With the days counting down, both former Strongmen look conditioned and ready to fight. With crisp hands and methodical footwork, Björnsson intends to close the chapter with Eddie Hall in just 26-days.