Hunter Henderson added another incredible feat of strength to her glittering resume. 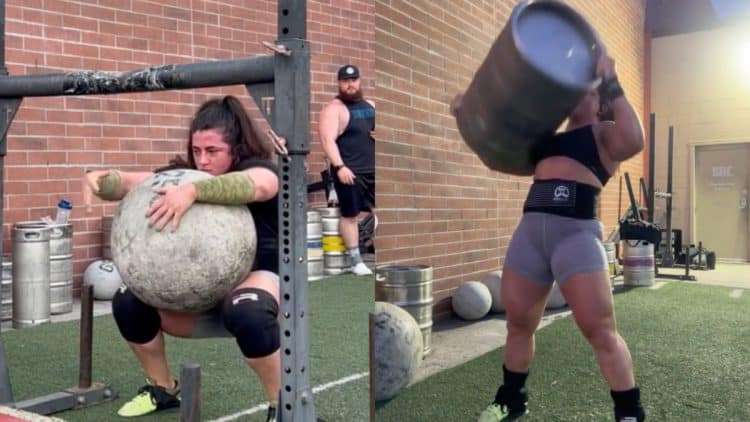 Powerlifter Hunter Henderson is widely renowned for her impressive strength. It is rare for an athlete to possess such a high level of proficiency in multiple strength sports as Henderson does. Having accumulated some incredible success in powerlifting and bodybuilding, she has now decided to challenge herself in the sport of Strongwoman as well. In a recent video posted on her Instagram, Henderson lifted a massive 250-pound (113.4-kilogram) Atlas Stone and performed 125-pound (56.7-kilogram) keg presses for six reps.

Hunter Henderson has permanently carved her place in the sport of powerlifting, claiming numerous records. Having started her professional career in 2018, Henderson has continued to dominate the world of powerlifting in almost every single competition. Henderson’s prowess mainly lies in herlower body strength, which also helped her perform the Atlas Stone and Keg Press feats of strength.

Speaking of lower body strength, earlier this year in May, Hunter showcased her best lifetime squat performance at the 2022 WRPF FQ Classic 2. She was the only female in the raw with wraps division, competing in the 82.5-kilogram weight class. Henderson set a new All-Time Squat (raw with wraps) World Record with her lift of 672.4 pounds (305 kilograms), crushing the previous record by over 22 pounds (10 kilograms).

Henderson has enjoyed an incredible year. In January, she added another record to her name during a showcase at the 2022 United States Powerlifting Association (USPA) Hybrid Showdown 4. Participating in the 82.5-kilogram  weight class, she performed an insane squat of 551.2 pounds (250 kilograms) to set a new All-Time World Record Squat, breaking the previous record by a comfortable 11 pounds (5 kilograms).

While Hunter is a very successful strength athlete, she is also a decorated bodybuilder. She started as an amateur bodybuilder, and competed in the Women’s Bodybuilding heavyweight division at the 2021 National Physique Committee (NPC) USA Championships, winning not only her weight class but also the overall title, which earned her an IFBB Pro Card. Henderson kept the momentum going by competing at the 2021 IFBB Tampa Pro, where she got placed second. Although she has not indicated if she will continue competing in the sport, the potential is surely there.

Hunter Henderson’s move to the Strongwoman world comes a year after she tried her hand at women’s bodybuilding.

Henderson can be seen picking up the Atlas Stone and maintaining a low position to get her grip right before completing the lift. She also performed the keg presses with proper form, using a push from her core to complete the compound movement.

During the off-season, Hunter Henderson recently claimed a new squat three-rep PR of 515 pounds (233.6 kilograms). She used knee sleeves, a lifting belt, and wrist wraps to aid her in the lift, making her squat raw as per the powerlifting rules. It is also noteworthy that Henderson did not use any steroids for three months prior to that squat personal best.

It remains to be seen if Henderson will make her competitive strongwoman debut, yet we await her announcement.

The majority of strength sports are interrelated in one way or another. In the sport of bodybuilding and powerlifting, competing...

Strongwoman Rhianon Lovelace is widely regarded as one of the best athletes in the sport. Her accomplishments are nothing short...

We have already witnessed Hunter Henderson compete twice this year. This involved lengthy and exhausting preparations, so she is now...

Hunter Henderson has a history of impressing everyone with massive lifts on multiple occasions. She is mostly known for her...