Labrada is training his legs once every nine days in the new eight-week split leading up to the 2022 Olympia. 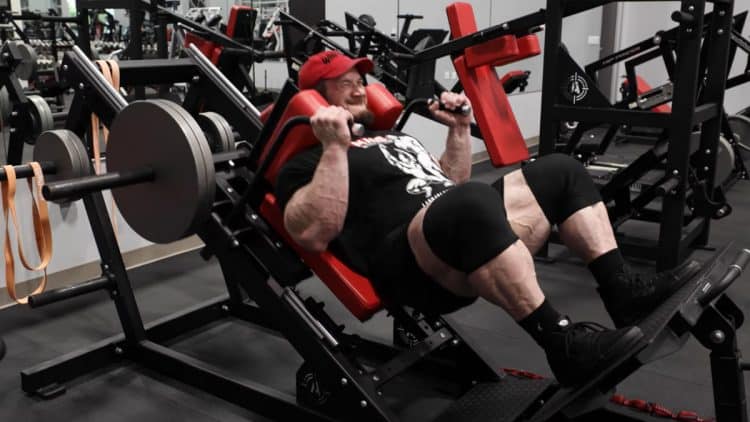 Even though in an off-season, Hunter Labrada isn’t taking his foot off the gas. Since the bodybuilder hasn’t yet started his official 2022 Olympia prep, he is focusing on increasing his training volume.

Labrada catapulted to the mainstream after winning gold at the 2020 Tampa Pro. However, he had to contend with an eighth-place finish at the Olympia the same year. Following a humbling 2020 competitive season, Labrada was back in business after winning the 2021 Chicago Pro and earning his qualification for the Olympia. At the 2021 Olympia, Labrada won fourth place, beating archrival Nick “The Mutant” Walker.

The standing calf machine Hunter uses comes with a pad that adds stability to the lift. Before starting the exercise, he explains the proper form for performing the standing calf raise:

By following these tips, you’ll be focusing entirely on your calves.

Hunter executed controlled and steady reps to kick start the blood flow in his calves while activating the other lower-body muscle groups.

He did the second calf exercise with heavy weight but executed controlled reps, boosting strength and muscle endurance.

“Biggest things — foot placement and width. You want to place [your feet] at a width wide enough so that your ankles, knees, and hips all are in a straight line. You don’t want to be extremely duck-toed or pigeon-toed. All that does is an extreme misalignment of the joints. It doesn’t emphasize one particular point of the muscle.”

After completing the calf exercises, Hunter moved on to the first hamstring lift of the leg workout routine.

Hunter’s suggestions for setting up the seated hamstring curl machine:

Per the bodybuilder, keeping the core active and rib cage down can trigger an effective bracing of the hips, which is an important element in the exercise. Labrada suggests wearing a seatbelt if you have access to one to ensure the hips remain on the pad.

Hunter moved to the back squat machine next. He attached resistance bands to the machine to increase the resistance. Each of these bands helps add approximately 150 pounds at the top of the motion.

Before doing the volume set, Labrada performed a normal set. He maintained a moderate pace, ensuring constant tension on the quads.

The men’s open division bodybuilder moved to the next exercise on the leg day routine. He chose to do unilateral hip press as it promotes symmetry and helps build equal strength in both legs. Additionally, working one leg at a time provides a fresh change of pace in his workout routine.

“It’s been a while since I’ve done any unilateral stuff in my program. So, I feel like it’s going to give me a new degree of hip health and like a new challenge and everything.”

Hunter finished the workout with the leg extension. Instead of doing multiple sets of moderate difficulty, Labrada focused on working his way up to one real hard set.

He finished the working set with adductors, which requires bringing your legs inwards. The movement helps build hip strength and inner legs and closes the thigh gap.

Leg extensions are an effective exercise to isolate the quadriceps. It puts tension on the outer quad sweeps, forcing the smallest muscle fibers into growing.

Hunter Labrada plans to train his legs once every nine days in his new eight-week split in light of his preparation for the 2022 Olympia. On the other hand, he aims to work on other muscle groups at least twice a week.