Iain Valliere: Big Ramy ‘Should Be Penalized’ For ‘Hole’ in Right Quad at 2022 Olympia If It’s Not ‘Mitigated’ In Time

Valliere believes the reigning champion is far ahead of his competition but could still be penalized by judges at 2022 Mr. Olympia for a noticeable 'hole' in his right quad. 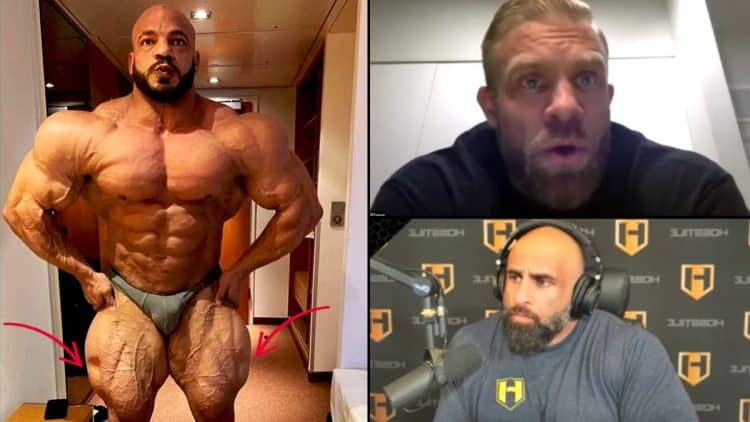 Men’s Open competitor Iain Valliere believes the reigning two-time Mr. Olympia champion Mamdouh ‘Big Ramy’ Elssbiay has a few loose ends to tie up before vying for another title defense. In a recent episode of Bro Chat, Valliere discussed the ‘hole’ in Ramy’s right quad and how it might affect his overall placing at the upcoming 2022 Olympia contest.

“Even if it’s not gear or whatever, I think Ramy is kind of ahead of everyone right now and I don’t think it’s going to make a difference,” Iain Valliere said.

With bodybuilding’s most important show of the year around the corner, athletes are amid extreme preparations to bring their best physiques possible to Sin City. Last year’s Mr. Olympia contest was won by Egypt’s Big Ramy, who has held his crown since 2020 when he took the throne from former champion Brandon Curry.

It’s been a tumultuous year for the reigning champion. Even though Ramy missed a guest posing appearance at Jim Manion’s Pittsburgh Pro, he issued an apology and moved on. When speaking to Olympia President Dan Solomon, the champ reiterated his status as the best bodybuilder in the league. He assured Solomon that he will ‘show the world’ in December.

One foe Ramy will be tasked with facing again is Men’s Open contender Iain Valliere. Valliere was runner-up to Nick Walker last year at the 2021 Arnold Classic. In addition to that solid performance, Valliere managed to finish seventh at Olympia in the same calendar year.

After earning his qualification by winning the 2022 Vancouver Pro, Valliere has been preparing diligently to once again challenge the sitting champion. But Valliere revealed that Ramy has another issue on his plate six weeks from his scheduled title defense — a problem judges may ‘penalize’ him for.

Valliere mentioned that Ramy has already received criticism for the ‘hole’ in his right quad after guest posing at the 2022 Dennis James Classic. Some fans have linked the hole in Ramy’s quad to Synthol or site enhancement oil use. However, Valliere maintains that it’s probably from gear.

Despite the issues, Valliere expects Ramy to handle the problem before 2022 Olympia.

“Yeah, he probably has a bunch of fuc**ng gear shot in there, who cares. Look, if his quads look like this on the Olympia stage, then he should absolutely be penalized for them, but we are six weeks out, and this is probably something he’s aware of and whatever he’s shooting or not shooting in there, he will have mitigated for the Olympia 100 percent,” Iain Valliere said.

Former 212 bodybuilder Jose Raymond said the hole on Ramy won’t ‘mysteriously’ fill in over the next six weeks as he saw it last year on stage.

“That was there last year, it’s not going to mysteriously fill in,” Jose Raymond told Valliere.

When discussing Ramy’s quad imbalance, Valliere mentioned that judges are likely to penalize him if it’s noticeable.

Valliere specified that judges look for imperfections or imbalances when examining bodybuilders at contests.

“I just think that anything that is noticeably distracting like that, whether it’s a tear, a bad shot, anything is something that can be deduced – because that’s not how it works but it’s obviously when you’re lined up to other guys without imperfections like that, it’s going to work against your favor.”

According to Valliere, Ramy’s Olympia performance could hinge on how his quads look when he’s on stage. He added that people are already criticizing the issue on social media.

“It depends on how it [his quads] looks on stage. He just did an appearance wherever he was, he pulled his pants down and it’s been all over the internet just like these pictures where people have been criticizing him for whatever is in his quads quite blatantly online.”

Valliere specified that the hole could be a “difference-maker” if someone else is pushing Ramy at 2022 Olympia.

“It’s like a hole eh,” Valliere said when looking at Ramy guest posing. “It is the attachments.”

“If there was someone pushing him harder, could that be a difference-maker, maybe.”

Ahead of the contest, Valliere has been keeping his head down and working. He recently crushed a leg day workout in the company of three-time Classic Physique Olympia Chris Bumstead.

While Iain has helped ‘C-Bum’ prepare over the last few years, the two have gone their separate ways in the meantime. Valliere hopes to bring his best look to the Olympia stage now that he can fully focus on his contest prep.

Considering how little time athletes have to tie up their preparations, Valliere and Jose Raymond agree the hole on Ramy’s quad is unlikely to disappear in the coming weeks. Despite the hiccups, Valliere is confident Ramy will have rectified the issue in time to retain his title at 2022 Olympia.