6 Major Headlines Coming Out of the 2022 Mr. Olympia Weekend 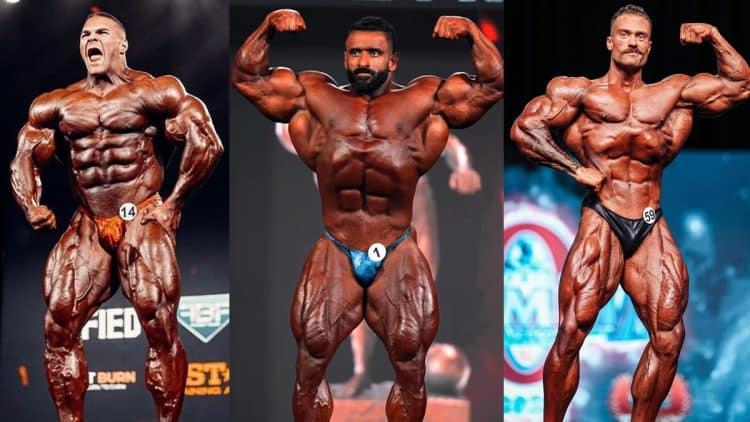 The 2022 Mr. Olympia contest finished last weekend, which saw 11 champions earn bodybuilding’s most coveted title. After a historic contest, Hadi Choopan became the 17th man to hold a Sandow and the first Mr. Olympia titleholder from Iran. This article will take a look at some of the biggest stories to come out of the 2022 Mr. Olympia event.

In addition to Choopan, former 212 Olympia winner Derek Lunsford, who received a special invitation to compete in the Men’s Open, secured second place. As a result of two former 212 competitors taking gold and silver, many believe their physiques represent where the direction of the Open class is headed.

Rounding out the podium in third place was Nick Walker and he made significant strides since last year’s 2021 Olympia. In fact, head judge Steve Weinberger suggested that ‘The Mutant’ has the potential to be a future Mr. Olympia. Walker left Sin City with the People’s Champ Award, a promising sign for what’s to come down the road.

Despite being qualified for 212 and the Men’s Open, Shaun Clarida chose to go back after the 212 title he dropped to Lunsford last year. Fans thought Clarida won his second Olympia crown dominantly, which sparked discussions about his chances of competing in the Men’s Open category.

The night was full of special moments as Erin Banks dethroned the reigning champ Brandon Hendrickson while Chris Bumstead closed the show with a fourth Classic Physique Olympia title. Below you can find some of the biggest stories to come out of the 2022 Mr. Olympia show.

1. Is 212 Bodybuilding Taking Over The Men’s Open?

Hadi Choopan won 2022 Olympia, and he wasn’t the bigger man compared to physiques like Ramy and Brandon Curry. Choopan has found success in 212 and the Open, suggesting bigger isn’t always better.

Perhaps one of the most shocking moments of the night was Derek Lunsford stepping on stage. Similar to his guest posing appearance at the 2022 Pittsburgh Pro, he brought the wow-factor in Vegas. He gained a ton of weight to make the change into the Open under the guidance of coach Hany Rambod.

Considering Choopan and Lunsford finished first and second, many believe judges are starting to favor qualities representative of the 212 Bodybuilding division like shape, conditioning, and balance.

Meanwhile, Shaun Clarida won his second 212 Olympia title and did so with some of the best conditioning of any division. Had he competed on the Open stage, many thought his chances of finishing on the podium were high.

Shaun’s performance also made others think about how former seven-time 212 Olympia Flex Lewis would have fared if he made the switch. After all, conditioning was always one of his best weapons. Given the success 212 bodybuilding competitors enjoyed last weekend, it seems likely more athletes from the division will try out the Open in 2023.

Over last weekend, Shaun Clarida established himself as a two-time 212 Olympia winner. He brought mind-boggling conditioning and vascularity to the contest, prompting discussions about how he’d do in the Men’s Open. His former rival, Derek Lunsford, just made history by almost winning the Mr. Olympia title in his Open class Olympia debut.

In the end, Clarida achieved a similar feat to four-time Olympia Jay Cutler. He managed to come back and win his title after losing it the year prior.

Having never finished below fourth place, Hadi Choopan was the picture of consistency heading into 2022 Olympia. During the pre-judging and finals, ‘The Persian Wolf’s’ energy and confidence were on full display. The victory was dedicated to the women of Iran after 23 years of hard work and sacrifice. His victory illustrated that bigger isn’t always better in the Open division.

Hadi Choopan’s victory at the Mr. Olympia competition this year demonstrated that size is not the ultimate determinant of success in the show. It remains to be seen if Choopan’s win will be a one-time event or if someone like Nick Walker will eventually take the top spot. However, Choopan’s win sends a message to all athletes that there are other factors besides size that can lead to victory.

The former two-time champion Mamdouh ‘Big Ramy’ Elssbiay finished fifth at 2022 Mr. Olympia. It’s been nearly 40 years since a sitting champion was knocked back this far (the last time was Samir Bannout after finishing sixth at 1984 Mr. Olympia). Suffice to say, Choopan’s victory sent shockwaves through the Men’s Open division and highlighted the importance of bringing top-notch conditioning.

The ‘beach body’ category continues to swell in popularity. Considering the physique transformation Erin Banks went through to stand on the Olympia stage, his accomplishment is nothing short of amazing. He already has a few opponents lined up for his title defense next year too.

Before Olympia went down, Banks and former four-time Men’s Physique Olympia Jeremy Buendia fired shots at each other. Buendia has publicly committed to a comeback, and fans would love nothing more than to see Banks and Buendia settle the score at next year’s 2023 Olympia.

If you asked bodybuilding legend Arnold Schwarzenegger, he would say Classic Physique bodies are a better representation of the Mr. Olympia title. Chris Bumstead secured his fourth Olympia win in the Classic Physique division last weekend and brought improvements to the stage once again.

Earlier this year, many fans thought Classic Physique was taking over the Open after the division was featured last at the 2022 Boston Pro. Ultimately, the show was won by one of Bumstead’s friendly rivals, Urs Kalecinski.

Schwarzenegger believes proportions have fallen by the wayside in Open bodybuilding. He specified that the Classic Physique category should be the Mr. Olympia because they have better proportions, balance, and symmetry.

6. Nick Walker Is The Future of Open Bodybuilding

Nick Walker finished third at 2022 Mr. Olympia and was honored with the People’s Champ Award. Throughout the season, Walker made meaningful changes to his physique to improve from fifth place in 2021. Following the conclusion of this year’s Olympia, head judge Steve Weinberger assessed Nick’s performance. Weinberger suggested that Walker bring more muscle while keeping the waist thin for next year’s Olympia (2023).

Walker’s passion, consistency, and work ethic make him extremely dangerous on stage. His latest Olympia performance is a promising sign of what’s to come moving forward.

With so many surprises at 2022 Olympia, fans are excited to see what’s on the horizon for all 11 divisions. The 2023 Olympia competition is scheduled for next year in the first week of November.

Everything You Need to Know About Dry Fasting vs. Water Fasting