Iain Valliere believes Andrew Jacked is going to expose a lot of people at 2022 Mr. Olympia with height, structure and size. 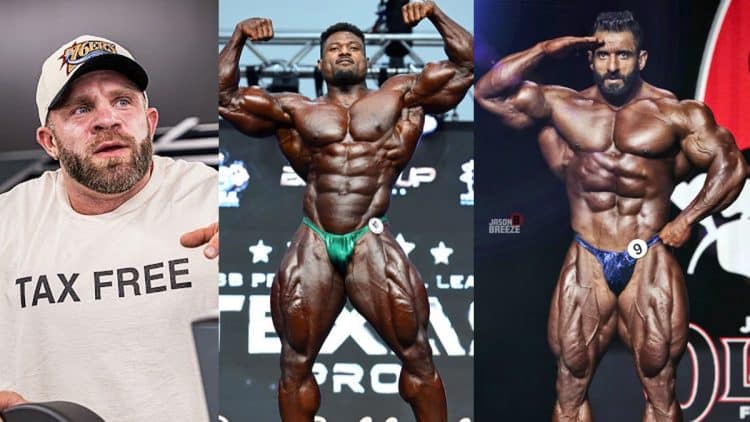 Top Men’s Open bodybuilder Iain Valliere sees a bright future ahead for Andrew Jacked. In the latest Bro Chat podcast, Valliere suggested that Andrew Jacked is ‘highly likely’ to make the first call out at 2022 Olympia due to his height, structure, and size.

Earlier this year, Andrew Jacked emerged as one of the hottest rookies of the year after earning his IFBB Pro card at the 2022 Amateur Arnold Classic contest. Coached by bodybuilding legend Flex Wheeler, Jacked’s impressive x-frame and slim waist make him a dangerous foe on stage. In addition to being trained/coached by Wheeler, Jacked also receives nutritional guidance from George Farah, who has trained the likes of Kai Greene.

Last month, Jacked won his pro debut at the 2022 Texas Pro show and delivered an astounding package. En route to earning his 2022 Olympia qualification, he defeated Steve Kuclo, and runner-up finisher Martin Fitzwater. In light of ongoing Visa issues, Jacked revealed that he might not get the chance to compete at the Arnold Sports UK contest next month, as originally planned.

Fitzwater, who was hoping to battle against Andrew in Europe, believes the Men’s Open standout is ‘bit**ng out’ of the contest. But for Iain Valliere, he sees it as a smart move, as it will give Jacked more time to prepare his physique for Mr. Olympia — bodybuilding’s biggest show of the year.

In episode #94 of Bro Chat, Iain Valliere discusses why it would be smart for Andrew to forgo the 2022 Arnold Sports UK contest and focus all of his attention on preparing a suitable package for Olympia in December.

“I would assume it’s more because his stock is high and there’s no reason to jeopardize that. I would take that momentum and ride it to the Olympia,” Iain Valliere said. “Take that time and use it to be better at the Olympia and exceed the expectations once again for the Olympia.”

Abiad suggested Marc Hector could challenge Jacked at the UK show but Valliere doesn’t believe his legs are dense enough to stand next to Andrew.

“I’m the biggest Marc Hector fan in the world — he’s still too light in the legs for Andrew [Jacked]. I think it’s not enough to make it worth it.”

When asked what improvements Jacked could make, Valliere had the following to say:

“He can definitely be in better condition in the rear half, you know,” says Iain. “I don’t know. I’ve only seen him compete once at that kind of level. I don’t know if that’s like a 75 percent effort or if that’s full-fledged. At the Olympia… you gotta be peeled man.”

According to Iain Valliere, it’s ‘highly likely’ that Jacked will be up in the first call out at 2022 Mr. Olympia.

“I think it’s highly likely that he’ll be up in that first call out,” says Valliere.

He believes Jacked’s chest and arms would hold up against Ramy, but not his back or quads.

“He’s going to be the odd man out in a pretty sense, not in a bad sense,” shared Valliere. “He’s also 290 dude, he’s gigantic. He dwarfed Kuclo. Completely dwarfed him. In certain parts yes [he’s filling his frame out] and certain parts no. He could put his chest or his arms against Ramy’s any day but if it’s his quads or his back, no, not quite.”

When asked if Andrew could beat Hadi Choopan or Hunter Labrada, Iain couldn’t give a direct answer but said Jacked will expose a lot of competitors’ ‘structural flaws.’

“It’s tough man. I need to see them all next to each other. I really can’t tell. That’s why I said it’s highly likely. I think his height and structure and size is gonna expose a lot of people’s structural flaws in that top six.”

Iain Valliere believes if Andrew brings up his back and the conditioning of his glutes/hamstrings, he will be even more difficult to deal with on stage.

“He’s got those crazy deep separated abs — he’s got fuc**ng tree trunk legs, you know. I mean, if he can bring the back up a little bit, and he brings the conditioning in his glutes and hams — that’s a lot to ask I know, but I also think it’s very doable.”

When asked again if Jacked could defeat Hadi Choopan, Valliere highlighted how difficult it is to contend with Choopan’s signature conditioning.

“Hadi is tough to beat because his conditioning is fuc**ng just ridiculous. Look, he’ll be a little bigger and his conditioning, his conditioning makes it hard for anyone. His shape and his front double is actually very pleasing. He’s very filled in. He’s a very hard bodybuilder to beat. The only shots you can gain any ground on him in is side shots.”

Leading up to this year’s Olympia contest, Valliere has been training with three-time Classic Physique Olympia winner Chris Bumstead. He earned his Olympia invitation at the 2022 Vancouver Pro in July, where he brought an extremely balanced and hard physique. Despite being pushed by fellow Open class bodybuilder Antoine Vaillant, Valliere finished in first.

It remains uncertain if Andrew Jacked is attending the upcoming 2022 Arnold Sports UK event, but Valliere believes he would be better off taking the extra time to improve for Olympia. Given what Andrew has done thus far in 2022, Valliere believes he’s highly likely to make the first call out at his first Olympia contest.