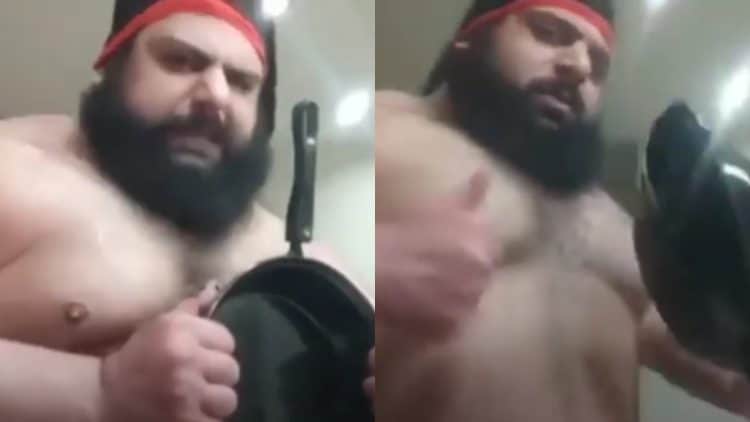 The highly anticipated boxing match between the Iranian Hulk, real name Sajad Gharibi and Martyn Ford was supposed to happen this weekend, but the bout was shelved. In a display of frustration over the fight being off, Iranian Hulk posted a video on YouTube showing him bend a frying pan.

Iranian Hulk was expected to make his pro boxing debut against Martyn Ford on April 30 after the bout was already postponed once due to injuries striking the fight card. At the beginning of April, the fight fell apart and both combatants blamed each other. After the cancelation, Martyn stated that it was called off due to the ‘health and safety risks involved’. However, once Hulk got word of Ford’s story, he turned the tables on the ‘scariest man on the planet’, asserting that it was Ford who pulled out of the contest. Iranian Hulk responded by announcing that he would be suing Martyn and his team for a breach of contract.

The two have a longstanding rivalry as they were scheduled to face each other in their MMA debuts for the prominent Polish organization KSW. Animosity reached a boiling point when the two met face-to-face in Dubai. Iranian Hulk attempted to take Ford down, and the two re-set for another face-off resulting in Gharibi being shoved to the ground. After the scuffle, Gharibi explained that his parents disowned him in an emotionally charged TV interview.

In a recent video published on YouTube, the Iranian Hulk makes short work of a frying pan a sign of frustration after his boxing debut was put on hold.

During the video, Gharibi gives a thumbs up after grunting and tensing up to squash the pan using just his hands. Gharibi is known for unconventional training methods. From punching concrete walls to fighting off a group of men using trips, throws, and grabs, the Iranian Hulk has amassed a gigantic social media presence courtesy of his unique personality and large physique. Training intensified before the fight was called off and Iranian Hulk revealed a video showing him crush heavy bags and take full-blown punches to the body.

Meanwhile, Martyn Ford also gave fans a glimpse of his boxing prep. Before the boxing match could take place, Ford made it clear that he was ‘building a beast from scratch‘, and intended to enter combat weighing around 320 lbs. With the battle against Iranian Hulk off the table, for now, Martyn has expressed interest in fighting someone else for his boxing debut.

It remains to be seen who is responsible for the sudden cancelation of the highly anticipated fight. While Martyn appears to have his eye on a different opponent, Iranian Hulk is evidently quite frustrated with how the fight fell apart.