Jay Cutler ‘Separated Himself from Society’, Went to a ‘Dark Place’ to ‘Maintain Top-Two in The World for 12 Years’

In a recent video, bodybuilding legend Jay Cutler reflected on the sacrifices he made to reach the top of the sport after being inspired by Ronnie Coleman. 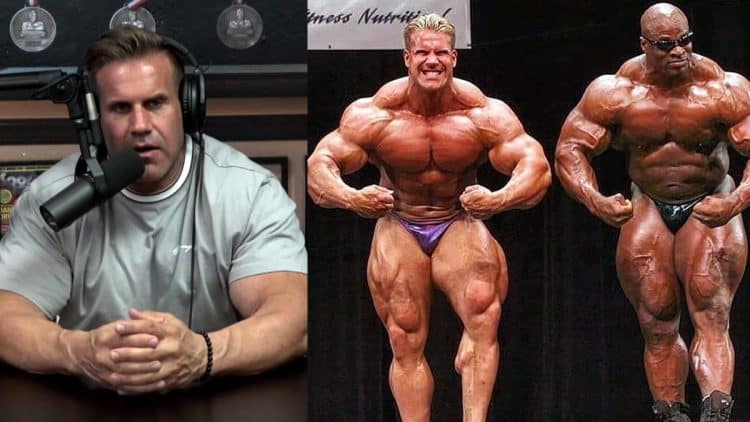 Four-time Mr. Olympia Jay Cutler reached the top of the sport and is widely recognized for his epic rivalry with eight-time Mr. Olympia Ronnie Coleman. In a recent video, Cutler opened up about the ‘dark place’ he and Coleman went to in order to become decorated champions.

Cutler managed to win Mr. Olympia four times during his tenure as a Pro (2006, 2007, 2009, 2010), with the help of incredible muscle mass and conditioning. He was tasked with facing some legendary athletes during his heyday like Dexter Jackson, Flex Wheeler, and Kevin Levrone. Finally, in 2006, Cutler’s idol turned into his rival before dethroning champion Ronnie Coleman.

During Coleman’s destructive reign, he defeated Cutler a handful of times at Mr. Olympia. Most notably, “The King” sent Cutler packing in second place at the 2001, 2003, 2004, and 2005 Mr. Olympia contests.

Whether it’s a workout or his shocking 140 egg whites diet, Cutler didn’t cut corners when it came to building his physique. In addition, Cutler has gone so far as to educate fans about the cycle he used while competing as a professional bodybuilder. All of these factors played a pivotal role in his success, but Cutler says that it also took going to a ‘very dark place’ to reach the top of the sport.

Jay Cutler on Championship Mentality: ‘Block Out All the Noise and Focus on the Positive’

In a recent video, Cutler reflected on the sacrifices it took to become Mr. Olympia.

“We talk about the mindset. What separates a champion from just a good bodybuilder. Cutler explained. “Like, because you need to be able to block all the haters.

You need to block out all the noise, block out all of the negative and focus on the positive because you know, it’s a very very dark place that you need to go to, especially those last few weeks you have to prep for a contest.” Cutler explained.

The Massachusetts native recalled having to get in the ‘zone’ when it was time to ramp up preparations for a show. Cutler says that he ‘had to separate’ from society to focus on improvements.

“Where you’re like okay, I need to zone in and really put this thing together. I had to really separate myself from society. Sometimes from friendships, relationships, and I would put myself in this dark dark place, and I would eat, sleep and train and there would be no other thing. I believe that’s what it really takes to be super successful.

I always kind of preached this, especially when I do these events and people say, ‘I have this or I have that, but I just can’t get to that point.’ I tell people, you have to separate in order to be super successful. It’s kind of propelled me to different business levels too.”

The bodybuilding legend remembered being inspired by Ronnie Coleman after hearing about “The King” training in a dungeon during the Texas summer heat.

Cutler Reflects on Bodybuilding Success and being Motivated by Ronnie Coleman

The four-time Mr. Olympia said one motivating factor that kept him on his toes was knowing that there was always ‘a new face that wanted to take my position’.

“I always knew there was someone training as hard, if not harder, or was coming up hungry. There was always a new face that wanted to take my position. The crazy part is, I was able to maintain top-two in the world for 12 years.”

Cutler recounted battling against some of the sport’s most prolific names before finally testing his mettle against Coleman.

“We talk about the Gunja Shulia camps, the Dennis Wolves and the Gustavo Bedells, the Dexter Jackson’s. You know, even Dennis James, you know I was just on his podcast and talked about Chris Cormier, I was battling him, Flex Wheeler, Kevin Levrone, Shawn Ray, they were my early idols.

Then of course, chasing the ultimate Ronnie Coleman. What motivation it was to watch him train in a dungeon in the heat of Texas and they would do those Flex photoshoots.”

He mentioned that Chris Aceto told him in 1998 that Coleman was drenched in sweat after pushing the pace during a training session.

“Chris Aceto was at the time, he was married to Laura Craval, she was placing in the Olympia second. Cutler added. “Wherever he was, Ronnie was with Vicky Gates at the time, and he texted me, and he’s like ‘dude, Ronnie Coleman’ is literally drenched doing cardio at 10 o’clock at night in his hotel gym. Like serious as all could be and then of course, he ends up winning.”

According to Jay Cutler, he remembered many top athletes being shocked by a young Coleman, who had yet to prove himself on some of bodybuilding’s most prestigious stages.

“I competed for my first pro show in ’98 at the Night of Champions, and Ronnie won and Kevin was second. Everyone was shocked because that’s when Ronnie was really on the come up. For him to beat Levrone, who was top five in the Olympia forever, people were shocked by that but they knew Ronnie was coming into it.”

Cutler on Ronnie Coleman’s Dominance: “He Had a Switch Like There Was No World”

Jay Cutler says that he had to zone out the world in order to reach the top of the sport. He added that Coleman also understood how to ignore all distractions when it was time to focus on preparations for a bodybuilding show.

“That was in May, then here we are in September, in New York he won his first Olympia and beat everybody. I remember Chris hit me up and said he was drenched and doing cardio at an incline. Ronnie said he did an hour in the morning and an hour at night and look at the condition he brought. It was because he was super dedicated.”

Once Cutler got to travel with the eight-time Mr. Olympia, he realized how important the mindset was to achieving success in bodybuilding.

“He had a switch like there was no world. I saw that first hand when I traveled with him later on. I got to travel around with him or train around him or with him at these appearances. He didn’t care what time it was, he would train. Obviously it was the off-season, but the mindset is everything when you come to that level.

We all talk about levels and the champion mindset versus the great competitor and being able to shut it on and off. You have to stay relaxed but at the same time, you can’t just leave any stones unturned.”

Even in retirement, Cutler doesn’t lay off the gas when it’s time to train. He said training has become like meditation nowadays and revealed that he is pushing the pace now more than ever. Given the accolades Cutler and Coleman achieved, it’s safe to say their views on bodybuilding carry a lot of weight.

To this day, Cutler and Coleman’s rivalry will be hard to topple in the coming years given how much they pushed each other throughout their careers. Leaving behind storied legacies, Cutler and Coleman remain some of the most impactful bodybuilders in the sport’s history.