Build a sharp physique with The Blade's cutting-edge diet and training program. 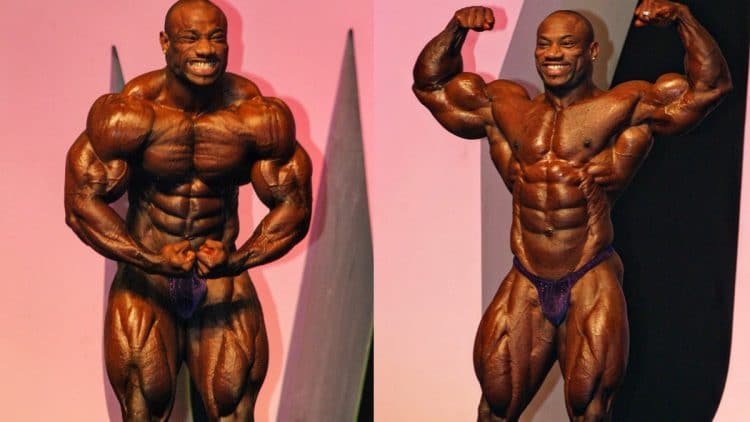 Dexter Jackson is an American IFBB Pro League bodybuilder and the winner of the coveted Mr. Olympia title. Besides his 2008 Sandow win, Jackson holds many records — most pro victories in Men’s category (29), most pro contests (90), most pro years (23), most Arnold Classic USA wins (five), most Mr. Olympia entries (20), and most Mr. Olympia top-6 finishes (16).

With more than three decades of competitive bodybuilding experience and a record 29 IFBB pro title wins under his belt, it’d be safe to say that Dexter “The Blade” Jackson knows a thing or two million about training, diet, and nutrition programs.

Although now retired from competitive bodybuilding, Jackson doesn’t use this as an excuse to go easy in the gym. He remains in top shape even after hanging up his boots after the 2020 Mr. Olympia. “The Blade” placed a respectable ninth at his last bodybuilding show.

Born and raised in Jacksonville, Dexter Jackson was the most energetic of the six children in his family. He played football in high school and ran a 4.20 in the forty-meter dash, one of the fastest times in the country.

Due to his crazy genetics, the 2018 Mr. Olympia champ developed an aesthetic physique playing football. At his friends’ suggestion, Jackson started lifting weights at the age of 20 and decided to compete at a local bodybuilding show three months into training. The rest, as they say, is history.

Trivia — Dexter Jackson is a fourth-degree black belt in karate.

Must Read: Dexter Jackson Reveals His Secrets To Staying Healthy In Retirement

Dexter Jackson follows a strict diet regimen. However, he doesn’t hold himself back if he’s craving something. Compared to his bodybuilding peers, Jackson takes a different dieting approach. He modifies his diet depending on how he feels and doesn’t tweak his diet in isolation.

“My trainer and I look and listen to my body to dictate my diet. It’s not the other way around, like most bodybuilders. When I diet, they prepare it differently for me: low salt, no butter, low oil, and low-sodium soy sauce.”

Jackson isn’t a fan of bland food. He doesn’t restrict himself to eating diet food and eats out whenever he feels like it.

“Why do I go out to eat so much? Because food is food. You say no sauce, you get no sauce. You say low sodium, you get low sodium. Steak is steak whether you cook it at home or get it at a restaurant.”

Jackson follows a typical bodybuilding diet and eats seven to eight small meals throughout the day. Research suggests that eating small and frequent meals can help control the level of “appetite hormones,” which can keep you satiated and reduce the chances of you binging on junk food during the day. [1]

“My first meal is always carbs, either grits or oatmeal to give me energy for the day. Depending on where my numbers are, I’ll eat one or two packets. Closer to the show, I drop it to one packet.” 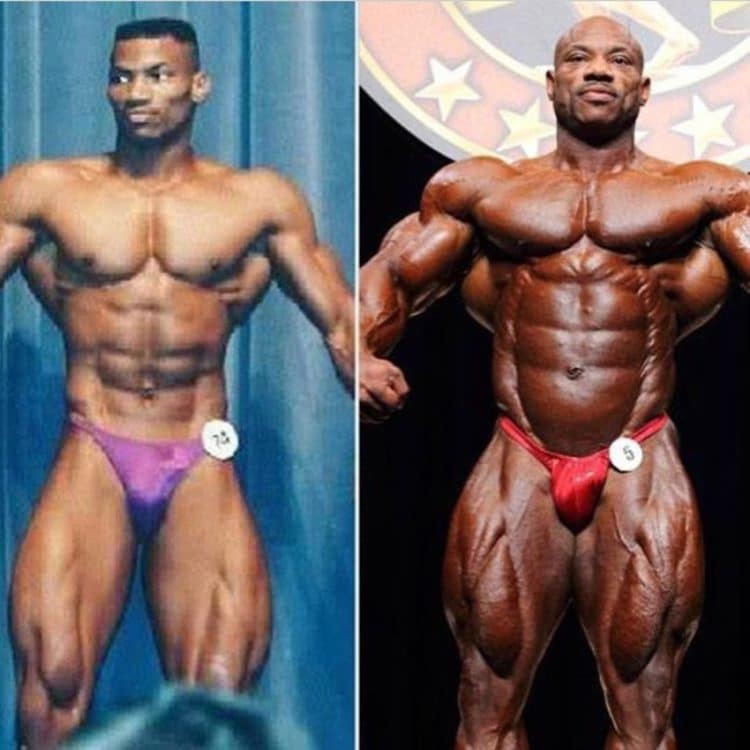 “When I retire, I’ll eat like a normal person and weigh less than 200 pounds.”

Dexter Jackson follows one of the most elaborate training programs. During his competitive days, his workouts lasted anywhere between 1.5 and two hours a day. 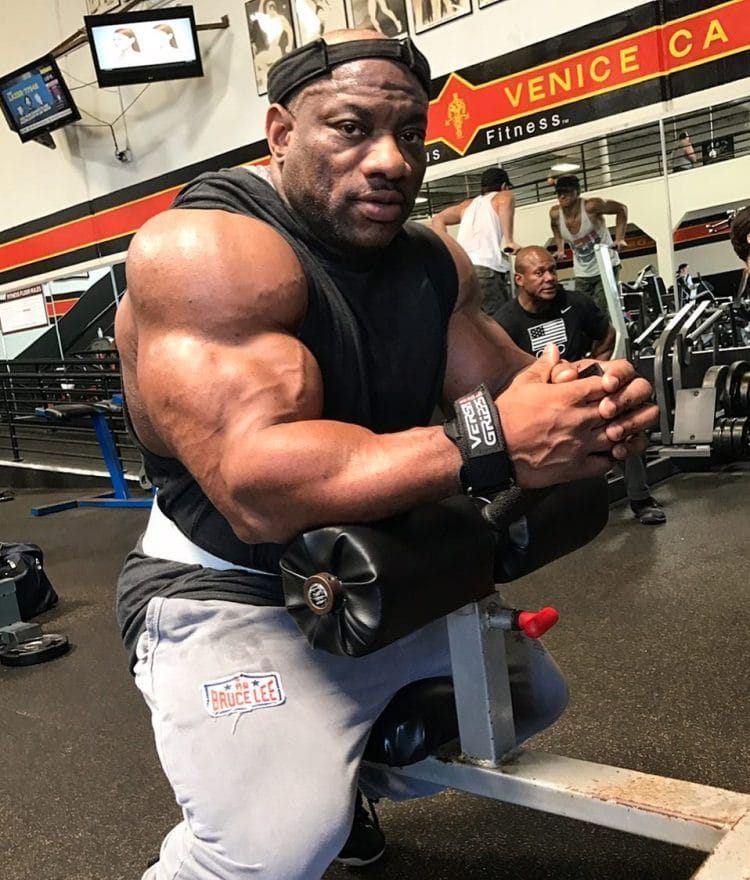 While prepping for shows, Jackson worked with the godfather of bodybuilding, Charles Glass, to polish his physique. Glass is known for his innovative training techniques and methods of hitting target muscles differently and igniting muscle growth.

1. Perform Warm-up Sets Before Each Exercise

“The Blade” gets in the groove by performing warm-up sets on each exercise. According to research, warming up your muscles can help them relax which in turn, can lead to fewer chances of an injury. Jackson starts his warm-ups with lighter weights and progresses into heavier working sets. [2]

Although Jackson’s workouts mainly consisted of heavy compound exercises in the initial phase of his bodybuilding career, he has since moved to a more machine and isolation exercise-focused training regimen.

Per the 2008 Mr. Olympia champ, focusing on machines helps him avoid unnecessary trauma during his training. Low-impact exercises can reduce your chances of an injury during training.

“As I got older, I changed my training. Guys like Ronnie [Coleman] and Dorian [Yates] kind of fell apart at the end because they didn’t change their training. I do more isolation and machine exercises now. It works for me, as long as I train hard with good form.”

Hypertrophy refers to an increase in muscular size achieved through exercise. According to a study, weightlifters should aim for 6-12 reps per set and allow 60-90 seconds between sets for rest to promote muscle hypertrophy. [3]

Jackson prefers training with moderate and lighter weights as it helps him achieve a better mind-muscle connection. The 2018 Mr. Olympia champ also recommends keeping your ego in check while lifting weights. Lifting heavier than you can handle or following an incorrect form can cause an injury.

Dexter Jackson follows a five-day training split, and this is what his workouts look like —

Friday — Back and Hamstrings 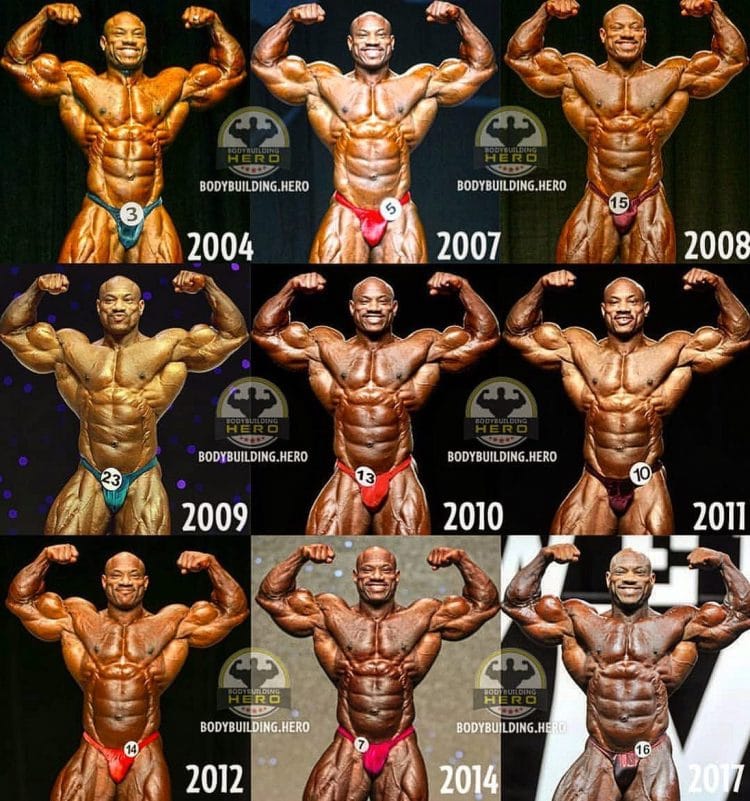 Being the best bodybuilder in the world requires good genetics, hard work, passion, and determination, and “The Blade” proved that he’s got enough of each by winning the Sandow in 2008 — the only trophy that had eluded him until that point.

Press-Up Vs. Push-Up – What’s the Difference?