The retired Men's Open bodybuilder joined Jay Cutler to discuss several important issues, including the growing trend of bodybuilders dying: "the past few years, it's happened too much" 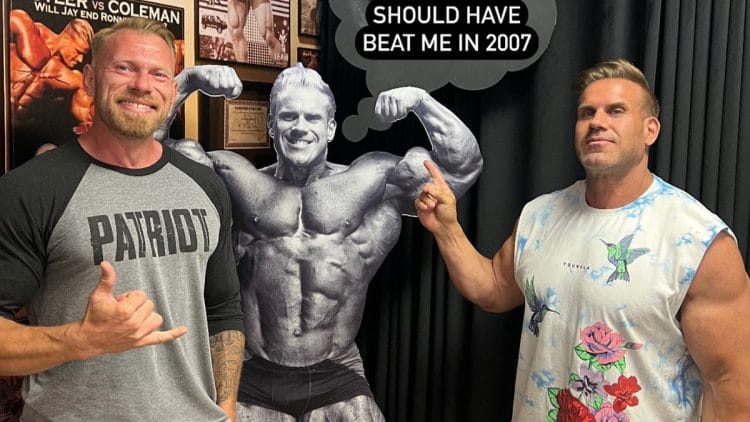 Retired German IFBB Pro bodybuilder Dennis Wolf made huge waves during his time competing with breathtaking size and a bulletproof lower body. During a recent sit-down with Jay Cutler, Wolf discussed a number of issues affecting the sport, including his thoughts on Classic Physique versus Men’s Open and the alarming trend of bodybuilders dying.

During the mid-2000s, Wolf emerged as a preeminent threat to some of bodybuilding’s most treasured titles. He competed on the Mr. Olympia stage a total of ten times but struggled to secure a coveted Sandow trophy before his career wrapped up.

Entering the 2014 Arnold Classic with wind behind his sails, Wolf defeated the late Shawn Rhoden on his way to securing gold, a victory that easily stands out as one of his greatest achievements in the sport. Though, he also managed to win the 2014 EVLS Prague Pro and registered a fourth-place showing at Mr. Olympia that same year.

Retired Men’s Open Pro Jay Cutler also competed throughout the 2000s. A four-time Mr. Olympia winner, Cutler has long established himself as one of the greatest athletes to come out of the sport. While he no longer competes professionally, that hasn’t stopped Cutler from connecting with other retired Pros and mulling over current events impacting the sport of bodybuilding.

In a YouTube video with Cutler, Wolf discussed the events that led to him being injured, and details what was responsible for cutting his career short.

“I feel you got pushed to retirement before you hit your peak.” Cutler tells Wolf.

Wolf explained at the time of his neck injury, he was over 300-pounds.

“I remember I was sitting and leaning [my head] back on the plane. I was feeling such a pain, like shooting in my neck like damn. It didn’t go away, even in the hotel. What is it, maybe I need a massage. So, I did a couple of massages over time. I was 300-pounds. I was big. It was after the season.

You have the rebound, you know. I felt like for three weeks that something was going on. On my way back, it wasn’t feeling better.” Wolf revealed.

The Pro bodybuilder mentioned that his nerves were pinched by broken pieces of bone, which ultimately left him with damage to his ‘C3, C4, C5, and C6’ vertebrae (interlocking bones that form the spinal column).

“My left side was not connecting. Weak and I couldn’t control it. So, for example if I was pulling, like rows, the left side was going up. What is this? The shoulder and all that, the nerves kind of disconnected. I couldn’t feel anything. Wolf continues. “I did the MRI. When I got the results, the doctor told me, ‘look, that’s how it looks like.’ There was damage between C3, C4, C5, and C6 [vertebra]. The nerves were pinched with broken bone pieces.  Wolf told Cutler.

The German native insists that the injury happened after practicing dumbbell pull overs.

“Dumbbell pull over. I think that’s what [caused] the biggest damage in the neck. I realized maybe a year or two years ago of what it was. But back then, I was just pushing through. I didn’t feel anything. Like I said, once I started feeling it, it was probably too late.” Wolf added.

Wolf on Bodybuilders Dying: ‘Nobody is Pointing at Anything, It’s Always Been This Way’

Speaking with Cutler, Wolf mentioned that athletes are dying at an alarming rate and that even competitors from other sports are passing away far too often.

“There’s so many sports right. But nobody talks about what happened in the last two years. Nobody talks about how many soccer players died. They were in their 20s! Nobody is pointing at anything. It’s always been this way. Of course, the past few years, it’s happened too much.” Wolf explains.

Wolf pointed to a training partner and friend, Paul Poloczek, who died at just 37 years old. The sport of bodybuilding has seen a lot of deaths lately. Before last year could conclude, former Mr. Olympia Shawn Rhoden died of heart problems and George Peterson also passed away days before competing at 2021 Mr. Olympia. 2022 was no different, as 29-year-old Bostin Loyd and bodybuilding star Cedric McMillan have recently added to that horrific body count.

“Unfortunately, even my good friend and athlete died a couple of weeks ago. Paul Poloczek. He was young man. Just 37 years old. Polish. We’ve been working together. I’m friends with a lot of my athletes. We became friends and we’ve been talking about his next surgery because the last one didn’t go well.” Wolf added.

Despite competing as a Men’s Open mass monster during his tenure in the sport, Wolf is adamant that Classic Physique might one day become the most popular category at bodybuilding events.

“Look, Classic Physique is a very competitive class right. Every year, something can change. I mean look, Alexander Westermeier, my athlete, he just won [2022] Pittsburgh Pro and it was his Pro debut. Second in New York.”

“Look, it could change every year or something. Even the Olympia, it’s not like the top-five is going to stay the same. It’s not like back in the day where the top two or three guys are always fighting for the first place. Somehow the top five and top six didn’t change much right, in ten years. Right, in ten years, straight competing at the Olympia every year, I was in the top six right. So, it’s almost every time the same guys.” Wolf shared.

After discussing the rise of Classic Physique, Wolf told Jay that he believes Big Ramy to be the favorite for 2022 Mr. Olympia but wouldn’t discount the chances of Nick Walker, who he equated to a ‘dinosaur’ given his freaky size. Cutler and Wolf agreed that Hadi Choopan or Brandon Curry could also catch Ramy slipping later this year if they come in with pristine conditioning.

“I’m excited if Ramy comes in better shape or worse shape, whatever. That’s why, he’s going for number three. He’s a favorite of course. But there is monsters like dinosaurs, what’s his name… Nick Walker. I call him a dinosaur because he looks like one.”

“I mean you got [Hadi] Choopan in there. Brandon Curry could win it back” Cutler told Wolf.

Wolf shared who he believes has the capacity to win 2022 Mr. Olympia in Men’s Open.

“A couple of guys. The body of Nick Walker might not be pleasant maybe but it’s bodybuilding right. He’s huge. It’s crazy. It’s already like fuc*! What is this? That’s why I say dinosaur [Wolf laughs]. He has good chances of course but it depends always on what you bring to the stage. Ramy of course is the biggest guy. Brandon, I mean, he’s always close. Brandon, I like his physique, it’s fantastic, beautiful. But that’s not the point.”

The retired Pro believes 2022 Olympia will be won with conditioning.

“Who brings the best condition. I mean they are all potential winners but I think Hadi Choopan is… yeah from all of these guys, who could really bring it. If Ramy comes in better than last year, he will be one of the favorites because it’s still bodybuilding. He’s big.” Wolf states.

While he is no longer actively competing, Wolf has made a considerable effort to downsize his physique. The 43-year-old recently shared an update, highlighting the dramatic transformation he’s undergone to remain in good health during retirement.

RELATED: Dennis Wolf Proves He Is In Insane Shape, Years Into Retirement

With the success Wolf and Cutler have had throughout their careers, their unique perspectives are always welcome, especially when discussing some of the more sensitive topics in the sport. After joining Cutler for a thorough discussion, Wolf believes bodybuilding is more unpredictable than it was during his prime years of competition.