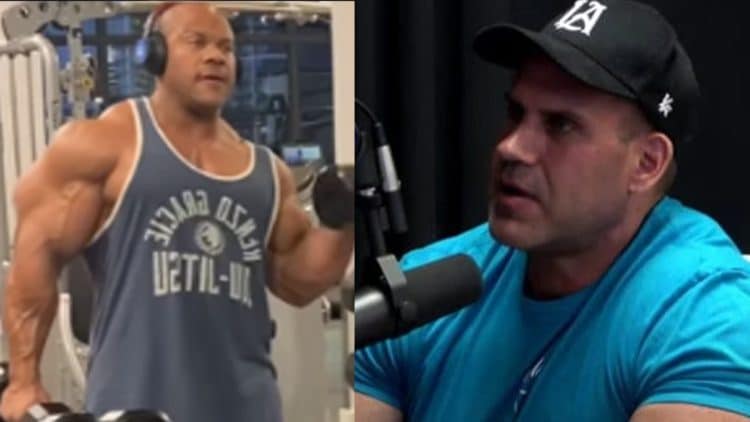 Jay Cutler is a four-time Mr. Olympia champion and led one of the most successful bodybuilding careers in the sport’s history. In a recent podcast with coach Milos Sarcev, Cutler shot down seven-time Mr. Olympia Phil Heath’s chances of a return to competitive bodybuilding.

In the mid-2000s Jay Cutler dominated the Men’s Open landscape with an iron fist. His notorious rise in the sport came in 2006 after dethroning Ronnie Coleman, a bodybuilder who many regarded as one of the best to ever compete. To this day, Cutler’s epic rivalry with “The King” remains one of the greatest the sport has seen.

Retired from bodybuilding, Cutler’s voice is still heard and well-respected by the community. Since stepping away from the sport in 2013, Cutler enjoys talking about his former profession on podcasts and interviews. His latest guest, Milos Sarcev is a decorated bodybuilding coach but has also competed as an IFBB Pro. Sarcev has taken to the Mr. Olympia stage a total of seven times. While he never matched Cutler’s achievements on stage, Sarcev is recognized for his coaching abilities. Unsure of Phil Heath‘s potential, both Sarcev and Cutler doubted if he was an Olympia caliber athlete at first.

Jay Cutler on Phil Heath Return to Bodybuilding, Opens Up on How He Would do Against Dorian Yates

In a recent interview on YouTube, Cutler shot down Phil Heath’s chances of a return to competitive bodybuilding and addressed how he would do if he stood next to six-time Mr. Olympia Dorian Yates.

“I don’t even want to discuss what they can do because it’s done. Like Phil Heath, he’s not coming back. Phil is in a good place. People just need to stop. It’s like comparing me to Dorian, or how would I have done against Dorian Yates. You know when they post the pictures up, they say, ‘oh what would he have done against this guy or that guy’, I stood next to Ronnie Coleman bro. There’s nobody harder to stand next to than Ronnie Coleman in my opinion.” Cutler says.

Cutler believes he would undoubtedly be able to stand next to Yates given that he stood on stage against the world’s best in Ronnie Coleman.

“2001 Olympia when you stood next to him, I told him I was kind of late and saw you, and I remember that moment because you winked at me. (Jay laughs) Nobody else, my jaw dropped because here there is Ronnie, and here there is a kid that is just KILLING him standing there. Yeah it was crazy.” Sarcev responded.

Milos Sarcev couldn’t believe his eyes at 2001 Mr. Olympia where Cutler pushed Coleman to the brink of defeat. Despite enduring a near-death experience due to diuretics and the accompanying dehydration, Coleman still managed to win the show.

“I was 28 years old, so you know I was still kind of new. You thought how many years prior I was going to be shit.” Cutler added.

“Maybe it was your ego you think right, did you really think you were that good that no one was comparable. Like when you saw me in 1996.” Cutler said.

Once bodybuilding legend Phil Heath entered the picture, Cutler knew right after he won the USA title that he would one day be Mr. Olympia. Jay remembers telling coach Chris Aceto about Phil, but back then, Aceto wrote off Heath and his chances of becoming a champion.

Phil Heath has spoken on the matter and revealed his chances of a competitive return to bodybuilding remain at a ‘5%’ chance. In his last Olympia appearance in 2020, Heath had an impressive showing and reached the podium in third place. Like prior Olympia shows, one area of concern became his midsection bloat after removing two hernias during surgery. Fans continue to call for his return especially after he showed off his improved abs in a trimmed-down physique update.

Despite many in the industry writing off Heath’s chances of becoming an Olympia champion, “The Gift” proved everyone wrong with a physique that judges couldn’t deny. After giving it some thought, Cutler doesn’t believe Heath will make a return to bodybuilding even though people continue to wonder when he might come back.