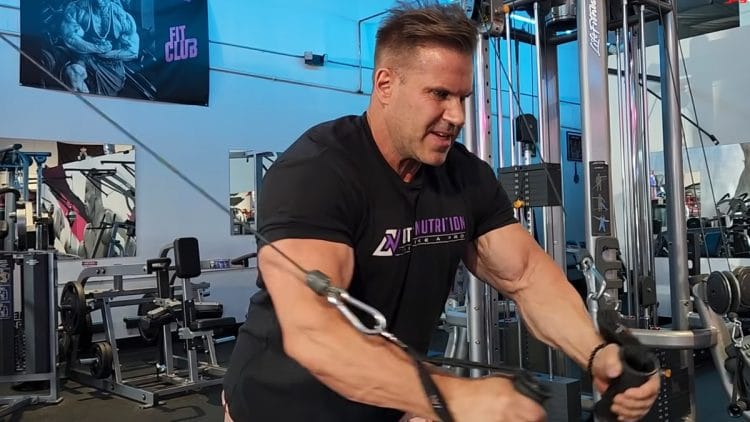 Bodybuilding legend Jay Cutler recently shared an effective chest and biceps workout. Cutler is bodybuilding great that competed in the 1990s and the 2000s era of bodybuilding. His fierce competitive rivalry with Ronnie Coleman is one of the greatest chapters in the history of the Open Pro division. The 48-year-old dethroned Coleman in 2006 and won the Mr. Olympia crown. Cutler then went on to secure a total of four Mr. Olympia wins in the years that followed.

The bodybuilding legend has maintained and even strengthened his bond with the bodybuilding fans by adapting well to the age of social media. Recently, Jay Cutler went through a chest and biceps workout. The video of this session was uploaded on his YouTube channel on May 1st, 2022.

Jay Cutler believes in giving special attention to the muscles or body parts that are weaker. Therefore he likes to incorporate calf movements in most of his workouts. He started the training session with two field sets of standing calf raises on the machine.

It is generally believed that standing calf raises work the gastrocnemius muscle that is on the outside of the back of the calf. On the other hand, the seated calf raises are beneficial for the soleus muscle that adds to the overall size and thickness of the calf. However, Cutler does not necessarily believe in the idea and said:

“I don’t believe in that too much… I think it’s like the incline, flat bench, decline bench and how it works the chest. I’m not sure I agree with all that.”

Jay Cutler started the chest building workout with an incline hammer press. This is one of his go-to movements when it comes to chest building and worked as the warm up for the exercises that followed.

“Why do I do it? Just feel it better. Especially at my age to get the body warm.”

Jay Cutler started this exercise with two plates on each side. He then worked his way up to three plates within a few sets and moved on to the next one.

Jay Cutler started the flat dumbbell press with 70lbs dumbbells and increased the weight to 80lbs and 85lbs in the two sets after that.

“Favourite exercise! If you ask me what the best exercise to grow your chest… it’s the lying flat dumbbell press, okay?”

While the barbell bench press is more popular among fitness enthusiasts, Jay Cutler stated that his one arm was weaker than the other. Therefore using dumbbells has benefited him to evenly distribute the load on both arms.

Jay Cutler next performed a cable chest press. The muscles remain under tension in both positive as well as negative phases of the rep when performed with a cable machine as opposed to free weights. While a lot of people think of the cable chest press as a good finisher, Cutler does not believe it can be a good ‘mass movement’.

He performed three sets of cable chest press and took to the next exercise.

This exercise served as the finisher to Jay Cutler’s chest workout. The 49-year-old performed three sets of the movement with 50lbs dumbbells and wrapped up the chest training session.

Jay Cutler admittedly does not like training the arms and dedicating a separate day for them in his training routine. Therefore his current training split has triceps along with shoulders and biceps clubbed with the chest workout.

Biceps curls on the machine

Jay Cutler started the workout with biceps curls on the machine and performed a warm-up set followed by three working sets of 10 to 12 reps to get the blood flowing into the muscles.

Cutler next took to another variation of biceps curls. Instead of using a regular straight bar or an EZ bar, he used a fat grip EZ bar for this exercise.

“I do not like to curl with a thin bar. So this wider grip… kills your ego a little bit because you have to be a little lighter with the weight,” Jay Cutler said.

He started the exercise with one plate on each side and finished the warm-up set. Cutler then went on to perform four working sets by further adding 10lbs plate. Each set consisted of 10 to 12 reps and he performed the reps with a standard technique.

After the free weight movement, Jay Cutler next jumped onto a machine exercise to work the biceps. While explaining the purpose of this movement, Cutler said:

“This is a little more isolation… Like I mentioned, the cables, the constant tension is good.”

Cutler performed three sets of seated cable biceps curls of 10 to 12 reps and took to the next one.

This exercise served as a finisher to Jay Cutler’s biceps workout. He performed the first set with 45lbs dumbbells and worked his way up to 50lbs for the subsequent sets.

“If you guys are looking to get that side… that thickness from the side of your arms, it’s a good exercise. It’s going to work all the way down into your forearm.”

Cutler performed three sets of 10 to 12 reps for this exercise and wrapped up the biceps workout.