The 4-time Mr. Olympia Champ shut down comeback talks during the workout with the fitness influencer. 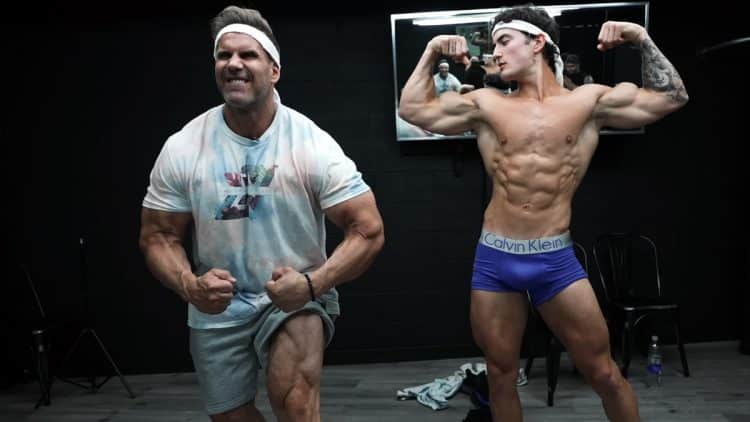 Bodybuilding legend Jay Cutler recently joined hands with Jesse James West for a chest workout. Cutler is a 4-time Mr. Olympia winner and is considered one of the greatest bodybuilders of all time. The 49-year-old achieved his Olympia dream by dethroning the legend and fierce rival, Ronnie Coleman, at the 2006 Olympia. After winning the competition in 2007, 2009, and 2010, he retired in 2013 following a sixth-place finish.

Cutler has transitioned well into the age of social media and remains one of the most recognized bodybuilders of his era. Although significantly downsized, the bodybuilding legend maintains an enviable physique at 49 years of age and continues to train rigorously. He has also emerged as a prominent voice in the sport of bodybuilding with his Cutler Cast podcast, where he previously opened up about his steroids cycle.

Cutler recently joined West for a grueling chest workout. West is one of the most entertaining fitness influencers and has amassed over 1.7 million followers on YouTube. He is known for challenging himself with different training methods and fitness trends. Plus, he partners with notable athletes and celebrities for his videos. His bodybuilding contest debut is eight days away (He doesn’t mention the date or event name), and he invited Cutler to train with him in order to benefit from his expertise. West posted the video of this session on his YouTube channel.

Cutler and West started the workout with the machine chest press to activate the sternal pec heads. The duo did not use heavy weights for this exercise and did a few warm-up sets.

While speaking about getting ready for the competition, Jay advised West to use the mirror as his friend at this stage of his competition prep and practice posing between sets.

“I would do (posing) 30 minutes a day because this is going to help condition you also…” Cutler added.

This movement was the second warm-up exercise of the day. High cable crossover is a compound movement that works the chest, triceps, and shoulder and helps build upper body strength and muscle mass. Cutler and West performed a few sets to get the blood flowing before getting to the heavy sets.

After working with the machines in the first two exercises, the legendary bodybuilder and his ‘natty’ counterpart took to free weights with the incline dumbbell press. It is a great movement to work the upper pecs. Cutler started the first set with 75-pound dumbbells. When inquired about the heaviest weight he has ever lifted on the incline chest press, Cutler stated that he went as high as about 200 pounds in each hand during the peak of his bodybuilding career. In between rounds, Cutler summarized his training philosophy in a single sentence:

“Every workout is different. So I don’t follow a textbook. I just go by the feel.”

Training spontaneously without a pre-decided concrete plan might seem odd, especially for a world champion bodybuilder. However, Cutler is one of the few bodybuilding legends that escaped major injuries throughout his career and left the sport relatively unscathed. This can be attributed to his habit of listening to his body and readjusting accordingly.

This movement served as the finisher of the chest workout. For advance-stage bodybuilders, the barbell is a preferred choice for incline press as the weight increase can be gradual with barbells and plates. On the other hand, dumbbells usually come in five-pound increments for heavier weights.

While having a casual conversation with West between sets, Cutler said that if he could go back in time and change something, he would compete at the 2002 Olympia. After a second-place finish at the 2001 Olympia, Cutler took time off and sat out in 2002. However, he feels that Coleman seemed beatable that year and Cutler could have snapped his winning streak if he had competed.

“I got second in ‘01, and Ronnie came in ‘02 he’s a lot smaller. Feels like a missed opportunity maybe because I kind of had him on the ropes in ‘01,” Cutler said.

The duo finished a few sets of this exercise and wrapped up the training session as Jay guided West through correct posing techniques.

Before training with the four-time Mr. Olympia champ, West collaborated with Ronnie Coleman for a workout. The combined advice from the two bodybuilding legends will certainly add a lot of value to West’s training. It will be interesting to see how he performs when he steps on stage.