Cutler discussed Arnold Schwarzenegger's contributions to bodybuilding and compared his success to Dwayne 'The Rock' Johnson's. 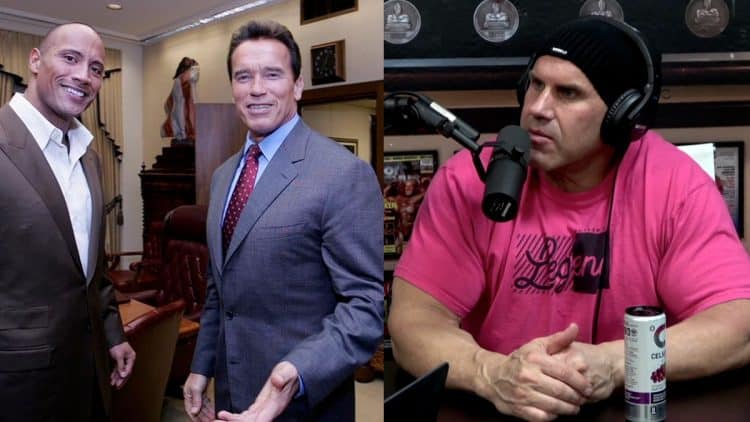 Since stepping away from the stage, Jay Cutler has become one of bodybuilding’s leading voices. In a recent podcast, Cutler paid respect to Arnold Schwarzenegger for his contributions to the sport and compared the legend’s success to Dwayne ‘The Rock’ Johnson’s.

As a seven-time Mr. Olympia winner (1970-1975, 1980), Schwarzenegger helped shape the standard for the Men’s Open division today. Schwarzenegger co-founded the Arnold Sports Festival with the late Jim Lorimer. The event serves as the second-most prestigious bodybuilding competition of the year, behind only Mr. Olympia.

While he’s long stopped competing, Schwarzenegger remains passionate about bodybuilding. He recently discussed the 2022 Mr. Olympia contest. According to the 75-year-old star, the Classic Physique category should be represented as Mr. Olympia instead of the Men’s Open Olympia winner.

However, Cutler believes the sport has changed ‘for better or worse’ since Arnold Schwarzenegger. The four-time Mr. Olympia drew attention to the fact that leg development has only improved since the last time Schwarzenegger appeared on stage. According to Jay, bodybuilders today make changes to their physiques based on judge’s feedback.

Jay Cutler: ‘I Hate to Compare,’ But Arnold Schwarzenegger Was A Bigger Icon Than The Rock

Cutler said Arnold Schwarzenegger was a ‘bigger’ international icon than The Rock, despite Johnson’s success over the past few years.

“He always had a character he was playing, Kindergarten Cop, so his aura on the stage, like him walking through the expo, remember the crowds of people man. I hate to compare, but Dwayne Johnson a couple of years ago when he was the action guy, Arnold was bigger than that.”

Cutler: ‘Arnold Schwarzenegger Was Destined For Proving That Anything Is Possible’

During the video, Cutler mentioned how important Arnold Schwarzenegger was to the growth of bodybuilding.

“He would always interview me, and say, ‘four-time Mr. Olympia,’ and what would I always say: [three-time Arnold Classic champion]. Yes, because listen, the Olympia is the elite right. There’s nothing bigger. I’m never going to disrespect that title but — I was very very proud to win the Arnold Classic. I mean Arnold – he inspired all of us right.

And he didn’t inspire us only on the stages because realistically, I didn’t get to see Arnold actually compete as much. From what I know, he won one of the Olympias with just [competing by] himself. No real competition. He won seven Olympias, but he was just one of those people that you talk about there’s no such thing as impossible, Arnold – I think was destined for proving that anything is possible,” says Jay Cutler.

Looking ahead to the 2023 Arnold Classic, Cutler mentioned a couple of names he sees doing well at the show.

“This Arnold, I would expect obviously not Hadi [Choopan] because it’s hard for him to get there, for anyone internationally. Ramy, Derek [Lunsford], Samson [Dauda], [William] Bonac, Nick Walker.”

“After two or three weeks man, you’re like, ‘hey, that wasn’t that hard.’ Every one of these trips when we go overseas, we’re kind of like, ‘ah man, this flight, it’s 20 hours,’ then we get there and we do the trip and [it’s] like, ‘this is going to be the longest week ever,’ and we come back and we’re like damn that wasn’t that bad.”

Fans will soon have a competitors list for the 2023 Arnold Classic in March. The show has announced that four-time AC winner Flex Wheeler will be honored with the Lifetime Achievement Award — the same distinction eight-time Olympia Ronnie Coleman received in 2021.

RELATED: Jay Cutler Calls For Change to Olympia Qualifications: ‘There’s Too Many Shows, It Needs To Be Fair Internationally’

Given the depth of talent that performed in Las Vegas at 2022 Olympia, Cutler and other veterans like Dennis James, believe the show could see a stacked lineup in March. Even though they competed in different eras, Cutler is grateful for Schwarzenegger’s impact on the sport and for proving that anything is possible.