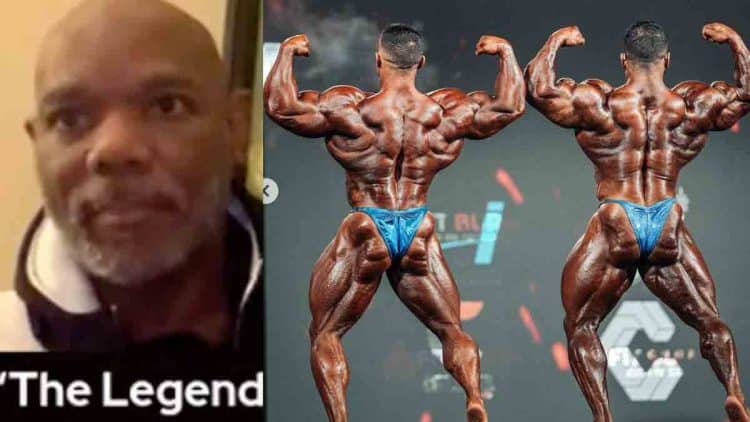 Bodybuilder Derek Lunsford‘s runner-up performance at 2022 Mr. Olympia became one of the most impactful storylines leaving Las Vegas, NV. last month. In a recent Olympia TV interview, Lunsford recapped his second-place finish, before Flex Wheeler and Shawn Ray discussed what’s next for him in 2023.

“As far as the skill, the work that I put in the gym, and my mentality as far as back training – when I first started bodybuilding, I always heard shows are won from the back. That’s all I ever heard,” Derek Lunsford told Wheeler and Ray.

Throughout last year, the bodybuilding community took notice of Derek Lunsford, especially after guest posing at the 2022 Pittsburgh Pro show. Weeks later, Derek’s coach Hany Rambod began to worry about his weight for the 212 category. These concerns were shared by Olympia President Dan Solomon, who mentioned Derek was ‘nowhere near’ the 212 weight cap.

In September, Lunsford accepted a special invitation to compete in the Open at 2022 Olympia. And while the invitation was being held for Flex Lewis, a former seven-time 212 Olympia, Lunsford took full advantage of the opportunity, having served as one of the biggest shocks of the night.

Even though he was unable to get past the newly crowned champ Hadi Choopan, Lunsford is grateful to be one step away from the Mr. Olympia title in his Open class debut. Recapping the epic performance and his bright future, Flex Wheeler and Shawn Ray joined him in an Olympia TV interview.

Derek Lunsford on 2022 Olympia 2nd Place Finish: “I Was Having The Time Of My Life”

Before Flex Wheeler and Shawn Ray chimed in, Derek Lunsford reflected on his 2022 Olympia performance.

“I was having the time of my life. You know, winning the 212 Olympia the year before I thought was the highlight of my career, ‘this is amazing,’ but then this year, going into the Open, and it just being a completely different lineup of guys — the Mr. Olympia Open guys… man I don’t know why I felt so calm and, in the moment, because I was just trying to take it all in.

I thought, ‘wow, what a dream come true, how awesome is this,’ but being in the middle there fighting for the title, I mean in your first Open Olympia, what more could you ask for right,” says Derek Lunsford.

According to Wheeler, the old adage that Olympias are won from the back doesn’t apply anymore. He argued that no one would have called it a robbery had Lunsford walked away with the Sandow a few weeks ago.

“If I was just to look at it and critique, I thought Derek had won. I thought his waist was smaller, actually, I thought he was more detailed from the rear. That old saying, ‘Olympias are won from the back,’ I was like, ‘obviously that’s not true anymore.’ I really thought he [Derek] would win. I really did, I thought he was going to win. I don’t think anyone would argue if he had won, that’s how close it was.

Wheeler thought Lunsford had better flow, a tighter waist, and a more conditioned back compared to Choopan.

Just looking at everything: his back was tighter, his waist was tighter, and he was flowing better so that’s just my opinion, it’s not personal,” Flex Wheeler shared.

Shawn Ray believes the only thing holding Derek back from a Mr. Olympia title was muscle maturity.

“Historically, I think right now, we’ve seen the best that Hadi [Choopan] has to offer. What is he going to work on next year? The back, but we’ve seen the best back he has to offer. What Derek has is youth and time, and that’s something you can’t buy. I think the [muscle] maturity comes over time. Derek doesn’t have to do again, a whole lot of changing to his physique structurally, weight-wise – he doesn’t have to get bigger.”
“You’ve been restricted [in 212]. I think that’s one of your problems with muscle maturity. You used to have to make weight for that class and now it’s wide open for you. You don’t really need to add too much to be impeccable right, because if you do, you’re going to be blocky.”

Wheeler advised Derek not to chase size, as he made this mistake while trying to catch up to eight-time Mr. Olympia Ronnie Coleman back when they competed.

“I always tell my athletes, steal a pose if you can. I would say to him do both versions [of the front double],but know your legs were a little too wide, and I think that’s because your hamstrings are so thick and you want to show all of it but sometimes that’s negative because it can take away from your look of being symmetrical,” Wheeler said.

‘The Sultant of Symmetry’ stressed that bigger isn’t always better. Many fans believe this to be true since a pair of former 212 athletes finished first and second place at 2022 Olympia.

“Listen Derek: bigger isn’t better, better is better, remember that. So, you’re almost at your peak of what you can do. I would probably say you could add another 15 percent more before you start going back downwards. That’s what I didn’t understand when I became a pro.”

Before ending the conversation, Lunsford reaffirmed his commitment to the sport and discussed his back training mentality:

“I would always go to the gym thinking, ‘no one is going to beat my back,'” Lunsford said. “Whether it’s the lats, traps, and every portion in between, the rhomboids, rear delts, just making sure that you don’t miss any angles in the gym. Throwing heavy weight around is great but being able to connect with the muscle and stimulate it is far more important than just to throw around crazy amounts of weight.”

Wheeler and Ray weren’t the only bodybuilding veterans to reflect on Lunsford’s Men’s Open Olympia debut. Coach Milos Sarcev was so impressed, he went as far to say Derek Lunsford’s v-taper is the most extreme in Mr. Olympia history.
Rich Gaspari also talked about Lunsford’s back development. He believes bodybuilders today have softer backs in general. He used a picture of six-time Olympia Dorian Yates and Choopan to illustrate his point. However, ‘The Persian Wolf’ took issue with the claim and mentioned that lighting and other factors largely influence how pictures look on the internet today.
RELATED: Jay Cutler Talks What Went Wrong With Big Ramy, Lays Out How Derek Lunsford Can Win 2023 Olympia
Given Derek’s physique transformation in less than one year, fans expect him to bring an even better package in November. While all signs point to Lunsford taking an off-season, should that change, Fitness Volt will keep you updated on his next move.