Bodybuilding legend Jay Cutler discussed getting older and how the sport has changed since the "Austrian Oak" was on top. 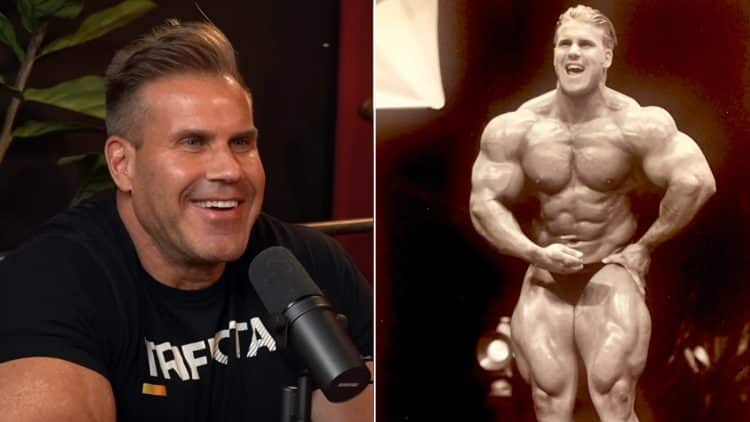 Bodybuilding legend Jay Cutler reached amazing heights as an IFBB Pro and has been enjoying retirement since 2013. In a recent video, Cutler gave his thoughts on having no health issues at 49, roid-rage, and how the sport has evolved since Arnold Schwarzenegger‘s era.

Cutler is no stranger to the sacrifices necessary to reach the top of the IFBB Pro League. He is responsible for dethroning the eight-time Mr. Olympia Ronnie Coleman in 2006. Cutler remembers how challenging it was to match Coleman’s work ethic. To dethrone a dominant champion like “The King,” Cutler remembered having to separate himself from society and go to a ‘dark place.’

While he’s long stepped away from the sport, Cutler still has a passion for his former proving grounds. In addition to sharing training sessions, he doesn’t mind discussing his opinion on an array of active competitors. Though, when discussing the Men’s Open lineup for 2022 Mr. Olympia, Cutler doesn’t think much will change at the top of the mountain. He recently suggested that Mamdouh ‘Big Ramy’ Elssbiay will handily retain his title in December.

In his latest interview, Cutler discussed getting older, and how he was able to leave behind a storied career while at the same time preserving his body. In addition, he broke down some of the key differences between Arnold Schwarzenegger’s bodybuilding era compared to his, which mostly took place between the 1990s – 2000s.

Jay Cutler: ‘I Have Zero Pain. I Have No Joint Pain. No Health Issues’

In a recent video, Cutler discussed having zero pain at the age of 49.

“Next year, I turn 50 in August and I’m going to get into the best shape I’ve been in ten years. Not to say, I’m getting back to what I looked like before but I’m encouraging people, age is a number because I honestly — at my age, I used to look at these guys in their forties and say that old guy over there. Now, I jump out of bed in the morning, and I’m energized to get up and do stuff, ” says Jay Cutler.

The four-time Mr. Olympia acknowledged that he took risks by putting substances into his body but specified that excessive food was the ‘killer.’

“Putting substances in my body to try to build the biggest physique, it’s not necessarily natural, says Cutler. The food, it’s taxing. The food is the killer. We can talk about drugs, dehydration and everything else. But that’s what kills people is the heart disease.”

Jay Cutler Talks Being Healthy, Roid-Rage, and How Sport Has Changed Since Arnold Schwarzenegger’s Era

According to Jay Cutler, the sport has advanced. Despite Schwarzenegger’s warning about the safety of the sport, Jay doesn’t believe bodybuilding has abandoned aesthetics.

“I don’t think that’s true necessarily ever, but there are some freaks in bodybuilding that are actually a good thing. I am a victim of becoming bigger than what I probably should have been, but I needed to absolutely win.”

He added that he never had “roid-rage” throughout his career.

Cutler believes the sport is heavily influenced by what judges favor at shows.

“The advancement of everything is sometimes not looked upon [as good] by our former champions to be as productive or attainable. The leg difference from Schwarzenegger’s era to now is crazy. Arnold is right that things have advanced, but I disagree in a sense that there are a lot of variables that go into it, and in the end it’s really down to the judging to decide who is going to be the first place winner.”

The bodybuilding legend says bodybuilding has moved forward despite some competitors overeating and using excessive amounts of gear.

“He [Arnold Schwarzenegger] wasn’t drug-free himself. It’s kind of an open field. We don’t necessarily have drug testing in it. It’s easy for his perception to be like, ‘this is what causes it [competitors overeating and using excessive gear], but I believe things have definitely advanced, sometimes for the better or worse.

But you can still have some kind of aesthetics mixed in with the mass monsters too. In the end, it’s really down to the judging and deciding who is going to be the first place winner at these major contests,” Cutler shared.

In addition to collaborating on countless podcasts, Cutler doesn’t miss an opportunity to attack a training session. The four-time Olympia winner recently annihilated a chest workout in the company of fitness influencer ‘Lexx Little.’

A lot has changed since Cutler was quad-stomping his way to four Mr. Olympia titles. While the sport has changed since Schwarzenegger’s tenure, Cutler managed to preserve his health while still cementing himself as an all-time great.