Cutler went through an exhausting 11-exercise training session and discussed the importance of post-workout nutrition. 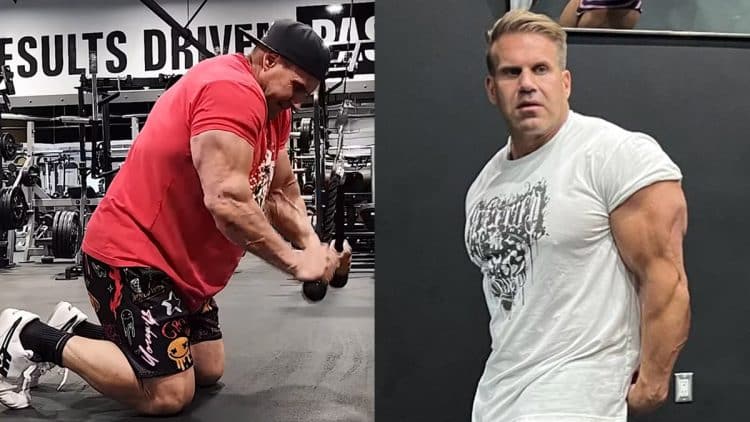 “Training is going well. We’re working toward that ‘Fit for 50.’ I got up and did the stairs this morning. I’m on a mission dude. I only did 30 minutes so I’m not in the full swing of things,” Jay Cutler said.

Cutler achieved the unthinkable during his tenure when he dethroned the eight-time Olympia winner Ronnie Coleman in 2006. Their rivalry elevated the sport and inspired Cutler to become one of bodybuilding’s biggest stars.

At 49 years old, Cutler hasn’t stopped training or lifting weights. Last month, the Massachusetts native demolished a chest workout, which prompted many in the sport to discuss a potential comeback. He sported a ripped and vascular build during a posing session that eventually went viral. Days later, Cutler shot down any chance at a competitive return, however.

As part of a ‘fit for 50’ challenge, Cutler said he’s getting back in shape for next year. He specified that he will only use testosterone replacement therapy [TRT] to facilitate the progress. To further his goal, Cutler shared one of his recent shoulder and triceps training sessions.

You can find a full list of exercises used by Jay Cutler below:

Cutler mentioned that he’s modifying the way he does cable crossovers to maximize rear delt development.

“So what I’m going to focus on is rear delts. People use the machines or the ropes. I’m actually going to do a cable crossover like this and really focus on bringing it up. I’ve lost a lot of my rear delts. I’ll admit that.”

In between exercises, Cutler opened up about some of the training splits he used throughout his career.

“I’ve gone back and forth. I did arms together I did chest and triceps. But now I do shoulders and tricecps. And ask me why I split arm training, where I train most of the body parts together like legs. [It’s because] I hate [training] arms. For my first-time viewers, I hate training arms,” Jay Cutler said.

“A muffin and a banana after I train,” Cutler said. “Post workout nutrition is the most important food. But the question is, are protein shakes better after training or whole food better after training. I think having immediate protein to get your body that replenishment is always great. Then, follow-up with an hour of actual digestible food.”

A lot has changed since Cutler’s time competing. However, one constant in his life that has remained the same is his love for fitness. In Sept., he shared a motivating leg day training session that saw him complete over 30 sets of different exercises. Additionally, Cutler compared dumbbells and barbells on the bench press. While both have utility, Cutler prefers dumbbells for safer lifting.

Cutler has seen the sport evolve since the days of Arnold Schwarzenegger. In the past, Schwarzenegger warned others about the dangers of bodybuilding. At one point, the ‘Austrian Oak’ labeled the Men’s Open division as downright lethal. Despite the criticism, Cutler believes the sport has advanced ‘for better or worse.’

Cutler’s attitude toward training remains the same despite changes to the sport. With hopes of building a new physique for next year, Cutler continues to push himself at every workout.