The four-time Mr. Olympia discussed his health, recent protocol, and his 'fit for 50' transformation challenge. 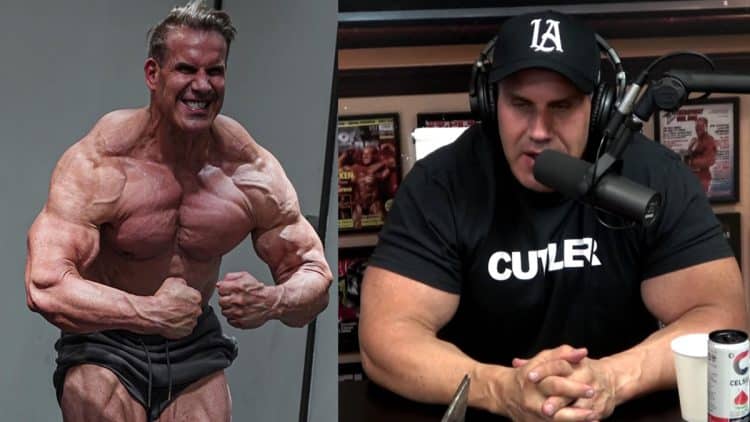 Bodybuilding legend Jay Cutler looks great at 49 and opened up about his desire to undergo a physical transformation. In a recent video, Cutler reflected on being a ‘hyper-responder’ to steroids and discussed his ‘fit for 50’ challenge.

During his prime, Jay Cutler was known for his massive lower body and razor-sharp conditioning. He managed to secure four Mr. Olympia titles and dethroned the mighty eight-time winner Ronnie Coleman in 2006. Their rivalry has gone down as one of the all-time greatest. Looking back, Cutler remembers how difficult it was to maintain his position as one of the best bodybuilders in the world for 12 years.

While he stepped away from the sport in 2013, Cutler is now an open book with fans and followers. He routinely shares his training sessions and post-retirement thoughts. Last week, the bodybuilding legend shocked the world after a physique update went viral. He was posing/training with fitness influencer ‘Lexx Little’ and left many in awe of his definition and vascularity at 49 years of age.

As a result of the update, some speculated about a bodybuilding comeback. Specifically, to a Masters Olympia contest if the show returns next year. However, Cutler shut those rumors down earlier this week, revealing that he has no intention of returning to a competition stage.

Even though he’s not entertaining a competitive return, Jay mentioned that he’s undergoing a transformation to look his best since retiring nearly a decade ago. In his latest podcast, he gave his thoughts on his current ‘fit for 50’ challenge as well as his past and current bodybuilding protocols.

Jay Cutler Talks Health and Current Bodybuilding Cycle: ‘Truthfully, I Do 200 Milligrams of TRT a Week’

In a recent video, Cutler reflected on his age and discussed his testosterone replacement therapy treatment.

“Listen, I’m particular about my lifestyle. I still eat on a very very good diet. I work out consistently. I do fasted cardio in the morning. I don’t party. I don’t drink or smoke.

I’m still rather young, 49 is not particularly older in my opinion. [The age] 49 is like the new 39. You know what I mean, that’s how I feel. I don’t live an older lifestyle. I feel good man. I get out of bed, like I said, I don’t have any aches and pains. I jump out of bed and I’m motivated,” Jay Cutler shared.

Despite rumors following his physique update, Cutler insists he’s taking 200 milligrams of TRT a week and is weighing around 240 pounds.

“I know there’s a lot of rumors on right now. I don’t know if you saw these pictures floating. I’m around 240s, high 230s and I don’t think I look anything tremendous but people are like, ‘he’s definitely doing at least a 1000 milligrams or 1,500 milligrams — and truthfully, I do 200 milligrams of TRT [testosterone replacement therapy] a week, if that.”

The four-time Mr. Olympia revealed that his doses tend to get interrupted when he has to travel.

“I mean, I was on track last week. You know why I was on track, because I actually split my TRT dose over two, and I did half and half. So, I bascially did 100 migs and 100 migs on certain days because I tried to take it every three days and try to be on track. When I travel, I don’t take it with me or whatever else. I’m very cautious of what I do. ”

Cutler said he’s a “hyper-responder” to steroids and recalled gaining 40 or 50 pounds on his first bodybuilding cycle.

“I’m okay with where it’s at right now. I feel good. I feel natural. I’ll be honest, I feel like I’m not on anything,” says Cutler. “Remember, the first cycle I ever did, was a CC of testosterone of 250 Sustanon and I put on 40 pounds or 50 pounds, or something from my natural weight, which was crazy. I’m a hyper-responder.”

Next, the Massachusetts native provided further information about his recent physique transformation challenge called ‘fit for 50.’

“I talked about this ‘fit for 50’ and I talked about going back to 2013,” Cutler said. “I just think it’s confusing. Don’t think I’m going back and forth with like, ‘oh, I’m going to get huge and ripped down.’ I’m just saying that’s the skin tightness that I would want and a little more fullness.

Like I said, I’m about 240, let’s say I’m 240 now. I don’t plan on getting any bigger but what’s going to happen is, I want to get fuller muscles, which means I need to eat more. Hany [Rambod] called me a few weeks ago, and said, ‘dude, you need to eat.’ He said, ‘I can see the way your muscles push — and you’re just not eating enough. That’s the truth. I need six meals a day,” says Cutler.

According to Cutler, he’s ‘gearing up’ for a physique transformation in January. He specified that he won’t be using Trenbolone, just testosterone.

“In January, I’m going to gear up for this [transformation],” Cutler explained. “No Tren. I’m not doing Tren for this transformation. It would strictly be for testosterone for sure. But I’m not going to take 5,000 or 1,500 migs.”

This was far from the first time Jay has talked about bodybuilding cycles. In the past, he’s opened up about his off-season and contest protocols. While things have changed drastically since his days as a bodybuilder, Cutler doesn’t shy away from tackling the sport’s more controversial matters. He maintains he always ‘came off’ gear throughout his decorated career.

Given that his physique transformation challenge hasn’t officially started, Cutler looks to be in fantastic shape. In the coming months, the legend hopes to add fullness to his muscles while using only a weekly testosterone treatment.