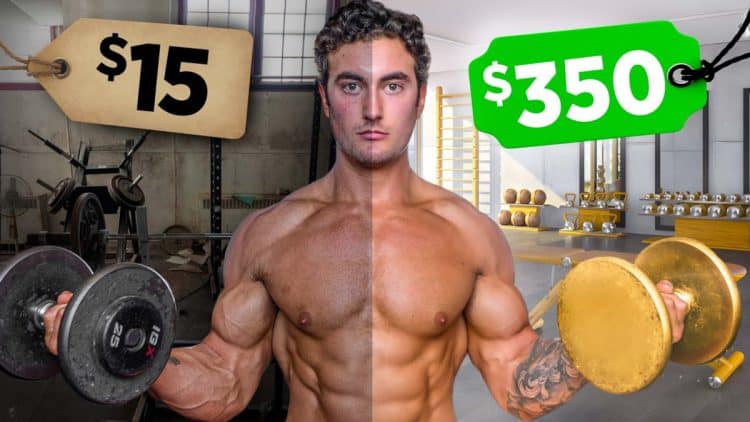 Social media fitness influencer Jesse James West is known for trying out new trends and challenging himself on adventures in the fitness world. In a recent video posted on his YouTube account, Jesse reported his findings after visiting the lowest and highest-rated gyms in New York City.

James rose to prominence through regular uploads on YouTube. He quickly amassed over 1.7 million followers on the platform and has developed a reputation in the community as one of the most entertaining fitness influencers online. From fake weight pranks, training with notable athletes or fit celebrities, to comparison videos, Jesse does it all.

He had previously tested the difference between calisthenics and bodybuilding training. He also tried out the ancestral lifestyle based on the nine tenets. He took inspiration from Liver King and ate, trained, and slept like him for 50 hours straight. King was in attendance to help guide him through the raw meat diet that included different cuts as well as organs.

In an Aug. 25th video uploaded to his YouTube channel, Jesse James West compared the best and worst-rated gyms in New York City.

Jesse kicked things off by visiting the worst-rated gym first and could instantly sense something was off. While West was waiting at the front counter, he noticed the vending machine did not work. A patron of the gym informed him that he lost the $5 he put in the machine.

“Although everyone seemed extremely friendly, there was already things going wrong. So far, the best thing about this gym is just the price, only being $15 per month.”

West mentioned that there was a review on Yelp that alleged things got stolen at the gym. He continued to analyze the equipment at the gym, starting off with the bench.

“Overall, locker review, okay. (It) reminds me of McDonald’s as a kid, not gonna lie. I feel like I’m just being watched by people. There’s so many people in here. I never feel awkward and I feel awkward. Alright, so apparently this bar (for bench press) is extremely messed up. It feels wobbly. It’s definitely not a gym where people are chatting to each other. We are going to do a bar check. Honestly, it’s clean. So, the bench itself is actually a very nice sturdy bench. The bar is weird because it doesn’t feel like a normal length. I think this is a squat bar and it’s on a bench rack. It feels longer than it should be.”

Next, he tried some bicep curls but could not find the dumbbells he was looking for.

“Not enough weights in this gym, that’s for sure. I do feel really awkward because I’m standing directly in front of people while working out. There’s nowhere to go. It’s a Sunday noon. First thing I noticed, way too many people. There’s like 8 people doing abs right now.”

West further tested the cleanliness of the gym and shared his findings.

He also tested the variety and quality of the equipment available.

“There’s a lot to do on legs day, like legs, you can 100% crush at this gym. Every gym has some cardio equipment but it’s a matter of how good it is. I’m not going to lie to you guys, (elliptical) should be bolted into the floor or something. I’m 180 pounds and if I can throw this thing to the side, that’s dangerous. (Stationary Bicycles) are definitely older and beat up but they work just fine.”

“After trying all the equipment at the gym, you can clearly tell there isn’t much to work with. You got the bare minimum. You could do very basic beginner workout, nothing flashy, nothing fancy to work.”

West took the consensus of the gym patrons around at the time.

In the end, Jesse shared his take on the gym.

“I’m going to give this gym a 3 star rating, not too shabby if you ask me.”

Jesse switched gears to visit Equinox on Bond Street, the top-rated gym in New York City. He was amazed by the juice bar and high-end clothing store inside.

“Huge difference is that this gym is $300 a month at their top package. That is an expensive place to be. So we are walking in, first thing I’m gonna notice is there’s a plethora of a juice bar. We have an entire Lululemon and all different high-end brand store. Already I can tell you the vibe is way different. Everything is so aesthetic here.”

West started off by visiting the cardio, stretch, and accessory workout area on the third floor of the building.

“The other gym, remember (the stationery bike) was wobbling? Nope (not here), it’s locked into the floor.”

“You have a nice view outside of Soho, aka very nice and pretty rich area.”

Jesse was impressed with the dance studio and the cycle studio, where towels were already on the equipment for patrons to use. He noted that Equinox owned Blink Fitness and tried to find some similarities between them.

“Ten times better of a squat rack than the last time. There is minimal gap compared to the other gym, things were loose. Little bit of dings and marks on this, definitely less than the last one. These are not the best barbells but this isn’t a powerlifting gym so I can understand. I will mention a five star gym and a three star gym has the exact same plates.”

Jesse reported that you could test your body fat in the gym, unlike the previous one which did not have anything of the kind.

“Definitely is less packed here, not as many people running around like a zoo. Everything is so new and futuristic and very nice. People at Equinox were there to workout and mind their own business. People at the other gym were definitely more likely to socialize.”

Jesse James West recently partnered with legendary bodybuilder Ronnie Coleman, who took him through a series of exercises he used to utilize during his time in the competition. The eight-time Mr. Olympia motivated West to keep pushing for as long as he could and the pump they had reflected the work they had just put in the gym.