In an inspiring display of strength, eight-time Mr. Olympia Ronnie Coleman is making the most of his time in retirement hitting legs despite struggling to walk unassisted. 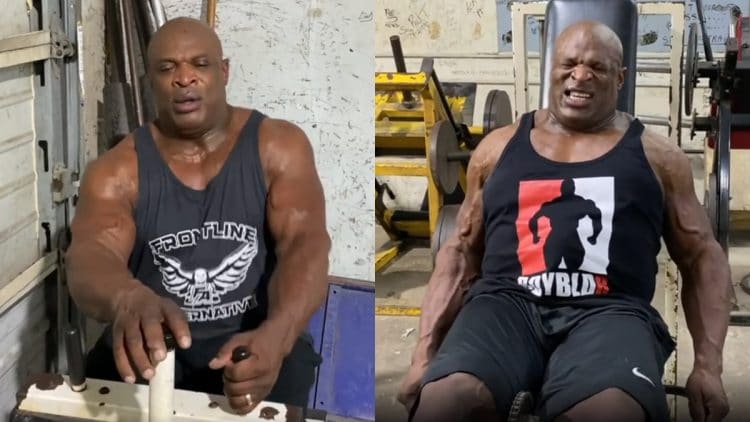 Ronnie Coleman is one of the most successful bodybuilders on the planet, though he has been enjoying retirement in his twilight years. In a recent video shared on Instagram, Coleman tackles adversity head-on with a taxing calf raise routine.

During his dominant reign as a Men’s Open bodybuilder, Coleman shocked the world with shredded muscularity and massive proportions. He captured the Mr. Olympia title a total of eight times, a feat which has only been replicated by legend Lee Haney. Coleman applied his ‘Yeah Buddy’ attitude to all aspects of life but especially in the weight room. “The King” is lauded for throwing around insanely heavy weight and proved his methods were wildly effective, courtesy of the long list of accolades he earned while actively competing.

During his illustrious career, Coleman was subject to several surgeries, a somewhat common occurrence in a sport as cutthroat as bodybuilding. However, the legend found himself unable to walk unassisted following all of the operations. In 2019, he revealed that his back was operated on more than ten times and explained that he needs to use a wheelchair to get around now. Despite the struggles he’s dealt with, the 58-year-old is still kicking, and showed off a calf raise exercise, proving that he still has what it takes to do what he loves.

Ronnie Coleman Defying Father Time: “It’s About How Bad You Wanna Do Something”

In a recent post made on Instagram, Coleman practiced calf raises at the Original MetroFlex Gym in Arlington, Texas, even though his feet were ‘totally numb’.

“Trying my very best to do calf raises with both of my feet being totally numb. Sometimes it’s not about how hard you try do something, it’s about how bad you wanna do something.

Shout out to my friends over at Frontline Alternatives for helping me keep my liver, kidney and heart levels on point. #yeahbuddy” Ronnie Coleman wrote.

I may have a little trouble with my mobility but I still train legs twice a week every week. I miss doing squats more than any exercises I’ve ever done. But at least I still have some leg strength left.

While he no longer competes professionally, Coleman’s name holds a lot of weight in this sport. Recently, a staggering number of bodybuilders have been dying — and some at a young age. Before 2021 could end, former Mr. Olympia Shawn Rhoden passed away at 46. In addition, George Peterson also died from heart complications and was declared dead in his hotel room days before competing at the 2021 Mr. Olympia.

In 2022, fans continued the grieving process, which was made worse after 29-year-old Bostin Loyd was found dead. However, it was the late passing of Cedric McMillan that prompted Coleman to speak about the alarming concern.

According to Coleman, ‘this sport is not worth dying for‘ and believes PEDs are certainly a factor when discussing bodybuilders passing away. In fact, Coleman recounted a scary experience with diuretics in 2001, remembering a near-death scare that was caused in part by dehydration.

Despite his inhibited ability to walk, Coleman still has a lot left in the tank, especially when it comes to lending knowledge to the next generation of bodybuilders. Coleman’s legacy is intact but he still finds the time to inspire others in the sport by pushing the pace at every training session.