Bodybuilding legend Ronnie Coleman discussed dangers in the sport and reflected on a near death experience, 'Forget this show, I want to live'. 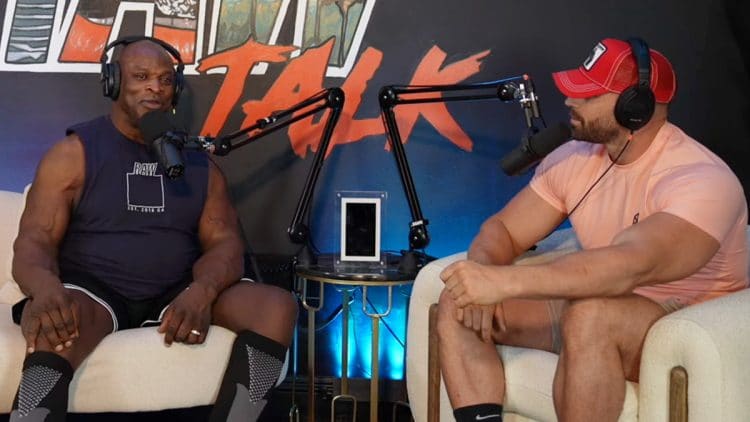 Regarded as one of the best bodybuilders to ever compete, Ronnie Coleman ushered in an era of dominance courtesy of his muscularity and staggering size. In a recent YouTube video, Coleman sat down with bodybuilder and fitness influencer Bradley Martyn. Coleman gave his reaction to the growing number of deaths in the sport and revisited a time before the 2001 Olympia where he thought he might die.

Bradley Martyn emerged as a threat in bodybuilding after capturing the Phil Heath Classic title in 2013. Martyn later became a household name in the fitness world due to his social media presence and detailed online workout routines.

Ronnie Coleman earned eight Mr. Olympia titles during his time competing as an IFBB Pro. The incredible accomplishment has only been replicated by fellow legend Lee Haney. In 2001, Ronnie earned the distinction of being the first athlete to ever win the Arnold Classic and Mr. Olympia in the same calendar year. Historic bodybuilding careers are always attached to epic rivalries and that was the case for Coleman, who was later challenged, and ultimately dethroned in 2006 by four-time Mr. Olympia Jay Cutler.

With more bodybuilders dying and the sudden passing of the late Cedric McMillan, the sporting community has shifted focus looking to address the concern. There have been an alarming number of athletes passing away from heart issues. 2018 Mr. Olympia Shawn Rhoden passed away last year at 46. In addition, George “Da Bull” Peterson died from heart complications days before competing at the 2021 Olympia.

Ronnie Coleman on Bodybuilding Safety, Diuretics Getting Banned from the IFBB Pro League

In a recent interview on YouTube, Coleman reacts to bodybuilders dying and the effect banning diuretics from the IFBB Pro League had on the sport.

“Yeah, that’s unfortunate. Everybody’s body is different though. Everybody has their own way of doing things. It’s kind of hard, you know when I was coming up, we had one guy die and they started drug testing every show. He died of diuretics of course, you know. So they started drug testing for diuretics every show, and nobody died or nothing, until they stopped. I’ll never forget when they stopped. He died in 1996 I think. (Mohammed) Benaziza, he died on the European Tour. I know I wasn’t there, I wasn’t Mr. Olympia back then. They drug tested every single show after that in the IFBB. ” Ronnie Coleman explained.

After Benaziza died of taking diuretics, the IFBB Pro League banned them, and Ronnie believes it prevented more deaths from occurring.

“Yeah they did because one guy died. The vice president wasn’t having it back then. He knew what it would do to the sport. So, it was a drug test, and it was a real one. It wasn’t no fake one. You couldn’t say, yeah I took the test, but it wasn’t a real test. It was a real test and if you failed they took your prize money. Yeah, Nasa failed, they took his money, that was in 1997.” Ronnie said.

According to Coleman, his rival Jay Cutler planned to sue the league and said that Cutler single-handedly got diuretic testing outlawed.

“When Jay (Cutler) failed the test, they, because Jay told them he was going to sue them. They was like, okay, well we won’t keep testing, and you get the chance to keep your prize money too. We will just do away with the testing. Jay changed that. They didn’t test no more after that.” Ronnie said.

Coleman believes proper blood work is the key to longevity as a bodybuilder. Looking back on his career, Ronnie remembers in 2001 having to peak twice for the Arnold Classic and Mr. Olympia which led to a scary near-death experience.

“When you start dying, this sport is not worth dying for. Ronnie laughs. Not at all. I remember back in 2001, I’ll never forget it like it was yesterday. I woke up the morning of the Olympia and I felt awful. I was totally dehydrated, you know, you have to be kind of a little dehydrated to get up there on stage. But this morning, I felt awful, I felt real bad. I was to the point where I felt like I was kind of dying. It scared the living hell out of me. I called my nutritionist, and said hey, dude I feel awful. Forget this show, I’m going to the hospital. I’m not going to die for this sport. I’m going to the hospital.”

After explaining to his team that he was extremely dehydrated, Ronnie thought he might die and told his team he was going to the hospital.

“I was so tired I could barely get out of bed. I’m like, nah this ain’t the way I’m supposed to feel. I’ve won four or five times already, and I’ve never felt like this. So, I just called, and said, hey forget this show, I want to live. I’m going to the hospital right now. He’s like ‘nah you worked too hard, I’ll tell you what to do, grab a gallon of water and drink as much as you can’. That’s what I did. I grabbed a gallon of water and drank the whole thing. I felt good. I was severely dehydrated. If I hadn’t of drank that water, yeah.” Ronnie shared.

Despite the suffering, Ronnie drank a gallon of water, competed, and defeated Jay Cutler at 2001 Mr. Olympia in a very close contest. It dawned on the eight-time Mr. Olympia champion later that he was trying to peak for two major shows in one year, which he says is what caused him to feel so sick.

“I was trying to be superman, I wanted to compete twice a year. I had already done the Arnold Classic earlier that year and that was the only time I’ve ever done that. I’ve never done that before. My body peaked at the Arnold Classic, and I looked the best I’ve ever looked, but people told me. I was trying to peak again for the Olympia, and my body is like no dude, we already peaked. You can’t do this twice. I never did that again and never had that problem again.” Ronnie shared.

Following the victory, Ronnie vowed never to compete at both shows in the same year, revealing that he ‘never had that problem again’. The eight-time Mr. Olympia is adamant that proper health screenings and blood tests are essential in a sport as dangerous as bodybuilding.

Coleman remains a pivotal figurehead to the sport, and his insight is valuable to the bodybuilding community. Diuretics and dehydration are some of the sport’s biggest issues, but Ronnie pushed through and managed to win 2001 Olympia.