Judge Steve Weinberger on Big Ramy Losing His Title: ‘He Was Off, That Wasn’t The Real Ramy We Know’ 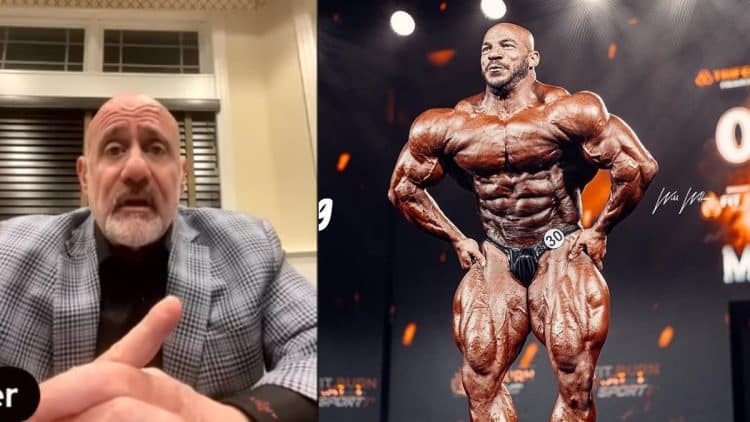 The 2022 Mr. Olympia delivered an exciting contest in the Men’s Open. During the show, Hadi Choopan and former 212 Olympia winner Derek Lunsford emerged as frontrunners. Many fans took notice of their conditioning and predicted it would be a battle for first place. After the smoke cleared at 2022 Olympia, the prestigious title was earned by Iran’s Hadi Choopan.

Shockingly, the former champion Big Ramy was knocked all the way down to a fifth place. After losing his title to Choopan, Elssbiay made it clear days after that he planned to come back for redemption in 2023. The Egyptian native also took part in a long interview where he reflected on the recent loss. After accepting the outcome, Ramy mentioned he will address and fix the issues as soon as he finds out what went wrong.

Taking part in a special video interview, IFBB head judge Steve Weinberger broke down what went down at 2022 Mr. Olympia and why Big Ramy came in off. Additionally, he laid out a viable path Nick Walker can take to become champion next year.

Steve Weinberger ‘Disappointed’ in ‘Off’ Big Ramy:  ‘There’s Some Problems With Him; Something Isn’t Right’

Steve Weinberger was left disappointed in Ramy’s physique at 2022 Olympia. He believes he looked worse this year than at the 2021 Olympia contest.

“I think the 2020 was the best Ramy and the New York Pro was the second best Ramy but those two were a lot closer to 2021 and 2022. 2021 and 2022 were not the real Ramy that we know. I don’t know whether he has a back injury or a shoulder injury but there’s some problems somewhere with him. I don’t know what it is, but something is not right.”

According to Weinberger, Hadi Choopan had no weaknesses on stage in Las Vegas last weekend.

“He [Hadi Choopan] came in a little bit bigger as hard as a rock — really, he looked amazing. There was no weakness in his physique — none. When they all came out and we were looking, I always tick off the top six guys and he was the first one I ticked off on my sheet like, ‘oh my God, this guy is ready today,’ and he was. At first glance, I thought, ‘wow, this is the guy to look at,'” said Weinberger.

The IFBB’s head judge said the contest was extremely close by the end of prejudging. However, he thought Lunsford was starting to fade from all of the posing whereas Choopan looked the same.

“That was a one-point decision [between Derek Lunsford and Hadi Choopan throughout prejudging]. When Derek came out, he looked big and full but because Derek does not have the muscle maturity of Hadi, he couldn’t withstand all the posing and started to flatten out.

Where in my opinion, Hadi stayed the same, like I said, he didn’t change from the prejudging to the night show. He maintained his condition and that’s where I thought Hadi was better. Derek was unbelievable, amazing, but he was still lacking a little bit of muscle maturity,” says Weinberger.

Steve: Nick Walker Is ‘In The Mix’ to Become Mr. Olympia Next Year

Despite his young age, Steve Weinberger and coach Hany Rambod agree Nick Walker has the potential to become a future Mr. Olympia winner.

“He has to do what he did this year [to be 2023 Mr. Olympia]. He put on enough muscle, and he did not mess with his waist at all. He still had a small waist, he had huge muscles, thick abdominals. He lost nothing and gained size. If he does that next year, he’ll be right in the mix [for the title]. It’s amazing to see what he did last year to this year,” says Steve Weinberger.

“I think Nick Walker made some really good gains this year just like Bob and Steve had said. I feel like he’s definitely knocking on the door. I think the greatest thing that he accomplished this year was consistency. Because it’s so hard to be consistent, and I felt that when he decided to go back to his trainer Matt Jansen I think mentally, he knew he had a really good track record with him,” says Hany Rambod.

Before ending the conversation, Steve suggested Brandon Curry bring up his legs. He added that Curry only placed fourth because of his beautiful shape.

“He needs to bring those legs in, the same conditioning he brings his upper body in. His legs and upper body looks like two different bodies. His legs have to come in hard with deep separation and that’s what he’s missing. He’s placing well because he has beautiful shape. He’d place better if he could come in better condition on his legs and hamstrings,” explained Weinberger.

Days before the 2022 Olympia contest happened, Steve Weinberger hinted that Big Ramy’s shape could hold him back at the contest. Looking back at the show in hindsight, Weinberger believes that might have played out on stage.

The Men’s Open division continues to take shape following the contest. Given the improvements made by ‘The Mutant,’ Steve Weinberger predicts it will be a three-man battle at 2023 Olympia between Choopan, Lunsford, and Walker.