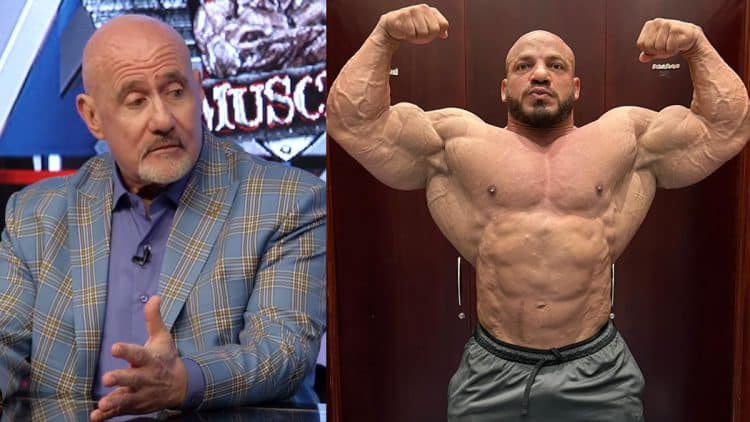 It’s been an exciting year for the sport of bodybuilding. New talent made their way into the league like Andrew Jacked and Michal Krizo. In addition, past contenders from previous Olympia competitions are seeking redemption.

Brandon Curry, a former Mr. Olympia winner from 2019, hopes to finally get his title back and Hadi Choopan, who has never finished below fourth at Olympia, plans to win his first Sandow under the guidance of his coach Hany Rambod.

Every Open bodybuilder at the event is gunning for Mamdouh ‘Big Ramy’ Elssbiay this weekend. Rivals Hunter Labrada and Nick Walker intend to settle the score after teasing a showdown during the off-season. “The Conqueror,” William Bonac, has publicly stated he’s playing the size game to handle Big Ramy at this year’s contest.

Throughout the off-season and contest prep, veterans and coaches of the sport have offered their insight regarding the Men’s Open lineup. Milos Sarcev, Jay Cutler, Ronnie Coleman, Lee Haney, and Markus Ruhl all agree that Elssbiay will leave Sin City as the reigning Mr. Olympia.

In a recent collaboration with Chris Cormier, the IFBB’s head judge Steve Weinberger made a special video appearance to examine some of the top talents in the Men’s Open. He also discussed Big Ramy’s chances this year and some of his possible weaknesses.

Steve Weinberger Talks About What Could Go Wrong for Big Ramy at 2022 Mr. Olympia

During the interview, Weinberger shared that Big Ramy’s newfound leanness could lead to problems with his shape.

“The pictures I saw of Ramy [this year], he looks extremely dangerous,” says Steve Weinberger. “I don’t think it’s overconfidence. He’s a pretty levelheaded guy. I think he could maybe over-diet and come in too small which I seriously doubt. He’s starting to look a little lean, which could hurt his shape… or come in too big like last year.”

Steve Weinberger examined most of the Men’s Open lineup individually after addressing his concerns regarding Ramy.

Weinberger believes Brandon Curry is dangerous and compared his fights with Ramy to the iconic boxing rivalry between Muhammad Ali and Joe Frazier.

“He has a great body. He’s a former Mr. Olympia. I mean, he’s not someone we can discount at all. Yes, and he’s a dangerous guy. Like you’re saying [Big Ramy] could be Muhammad Ali, [Brandon Curry] could be Joe Frazier.”

Similar to Cormier’s criticism of Hadi Choopan recently, Steve also recommended “The Persian Wolf” fix the issue with his shoulders.

“Hopefully he can fix a couple of little things he has with his shoulders. Honestly, he’s a threat to that title, he seriously is. He’s a serious threat, says Weinberger while talking the 2022 Olympia lineup.

Steve acknowledged that Hunter Labrada took last year’s criticisms to heart and is bringing improvements to the 2022 Olympia stage. He went as far to say Hunter could crack the top three.

Former Arnold Classic winner Nick Walker was pushing nearly 300 pounds during the off-season this year. While Steve appreciates his muscularity and conditioning leading up to the show, he suggested Walker’s shape will hold him back at 2022 Olympia again.

“There’s no problem with vascularity on Nick. Nick is a mass monster. Shape is not his forte. His forte is muscle and conditioning, and we’ll see what he looks like this year. I don’t know if he could honestly improve on his shape. If he can, I’ll take my hat off to him. But he’s got that body that is just like a monster, like a dinosaur. Full of muscle and full of veins.”

Weinberger mentioned that Walker’s muscularity reminds him of a better version of Markus Ruhl.

“He’s a better version of Markus Ruhl. He has better shape than Markus Ruhl but he has that Markus Ruhl muscularity,” says Weinberger. “That’s what he needed to do the most [is slim the waist] because his waist was a little bit on the thick side to tell you the truth and that’s how Hunter bypassed him last year.”

According to Weinberger, he judges physiques based on proportions, symmetry, and comparisons with other bodybuilders.

“I’m not saying, ‘oh, he’s got a smaller waist, he wins,’ no. It’s symmetry and the proportions of your physique that I compare with the bodies next to you.”

As for William Bonac’s physique, Steve stressed that he needed to improve his legs — the same issue Brandon Curry has been dealing with.

Weinberger is impressed with Andrew Jacked‘s potential. He added that Andrew finishing in the top eight would be a huge accomplishment in his debut at the show.

“He’s got huge arms, he’s a threat. I think he’s going to surprise a lot of people [at 2022 Olympia],” Weinberger said. “If he can break into the top eight, he won in my opinion. I still think he needs more legs and more size overall because he’s such a tall guy. But if he breaks into that top eight — to me, he’s a winner.”

Out of the entire lineup, Weinberger specified that reigning 212 Olympia champion Derek Lunsford had the most shock value. After guest posing at the Pittsburgh Pro show in the place of an absent Big Ramy, Steve said he was blown away by Lunsford.

“When he guest posed at Jim Manion’s Pittsburgh show, I honestly nearly fell off my chair. I couldn’t believe he went from 212 champion, to I think he weighed about 260. His shape was unbelievable, his stomach was in, I knew he was going in the Open because there was no way he could come down to 212.

He honestly shocked the hell out of me. I was blown away. Nick looked great, but the improvements Derek [Lunsford] made were outstanding. We’re talking about 40 pounds of muscle,” Weinberger explained. His symmetry and balance make him very dangerous to everybody.”

Wrapping up the segment, Weinberger talked about the dramatic improvements Blessing Awodibu made over the past year. This will be Awodibu’s first Mr. Olympia contest and fans hope they get to see ‘The Boogieman’ pose next to some of his rivals in the league like Michal Krizo, Nick Walker, and Iain Valliere.

“I can’t believe the improvements he’s made but he still needs to bring those legs up. He brought them up and has done a great job. I didn’t think he could do what he’s done so far, if he continues, Andrew Jacked better be careful.”

The reigning champion Big Ramy recently discussed the lineup at this year’s Olympia contest. When looking at his competition, the Egyptian native listed Hadi Choopan, William Bonac, and Brandon Curry as his biggest threats.

Four-time Mr. Olympia Jay Cutler predicted this show is on track to be the most exciting ever. This weekend 11 champions will be crowned at 2022 Mr. Olympia. IFBB head judge Steve Weinberger is overseeing many of the comparisons and will enjoy a front-row seat to all of the action.