With Chris Bumstead out of the picture, Urs Kalecinski looks forward to a battle with Brazil's Ramon Dino on the 2023 Arnold Classic stage. 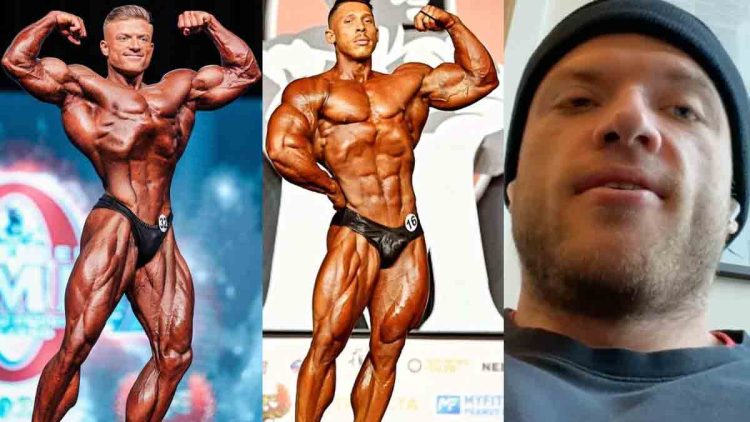 Classic Physique bodybuilder Urs Kalecinski is confident ahead of his next performance at the 2023 Arnold Classic, scheduled for March 2-5 in Ohio. In a recent interview, Kalecinski revealed his biggest mission in seven weeks will be defeating Ramon Rocha Queiroz.

It didn’t take long for the 24-year-old German standout Kalecinski to garner attention in the IFBB Pro League. In 2021, he debuted at the Olympia competition in fourth place. Following the performance, fans and veterans took notice of his shredded quads and aesthetics.

At the 2022 Arnold Classic, Kalecinski continued to show promise with a third-place finish, behind Queiroz and winner, Terrence Ruffin. He claimed the Boston Pro title a week later and then finished first at the Kuwait Pro. To prepare for the biggest show of the year, he showcased a number of training sessions, even with the reigning champion Chris Bumstead.

Before the season ended, Kalecisnki, and over 50 other Classic Physique competitors met in Las Vegas to determine the Classic Physique Olympia champion. While Kalecinski and Queiroz brought improvements, they couldn’t stop Chris Bumstead, who displayed arguably his most conditioned package to date. Making the victory even more impressive was the fact that ‘CBum’ accomplished it with a torn bicep.

Bumstead will take time off to rest and recover. In the coming weeks, Kalecinski is prepping for another showdown with 2022 Olympia runner-up Queiroz. Additionally, ‘The Miracle Bear’ discussed what improvements he plans to make this year.

Urs Kalecisnki: I Want a ‘Comparison with Ramon; We Will Battle It Out’

“Honestly, that’s the biggest mission for me [to beat Ramon Rocha Queiroz]. In my opinion, Chris [Bumstead] looked outstanding this year, so he was clearly the number one. So, I wish for myself, a comparison with Ramon because I think we are the both who can battle it out and Chris was just too far away this year. So, looking up for another battle with Ramon Rocha Queiroz,” says Kalecinski.

“We know that’s the battle. Honestly, I love to compete in this area with those kind of guys, especially with Chris and I always — yeah, we’re always cool together. We have a lot of contact almost every day, sending some messages and stuff. It’s great to push against each other.”

Urs Kalecisnki Talks Jumping Back Into Prep for 2023 Arnold Classic

According to Urs, competing at the 2023 AC contest was planned before last month’s Olympia competition. He added, ‘when Arnold [Schwarzenegger] calls you, you better be there.’

“Before the Olympia [I decided the compete at the 2023 Arnold Classic]. So, I didn’t know it, but when you’re in the top four or top three now, yeah, you get an invitation. Then, I decided okay, let’s keep on moving and jump into it. Because for me, growing up, the Arnolds were always a major show.

For me, it’s a kind of not the same but kind of the same prestige like the Olympia, so when Arnold calls, you better be there, so. For me, there’s no opportunity to not doing the Arnold. Arnolds and the Olympias are always there. I want to always compete in them,” Urs Kalecinski explained.

There were some curveballs regarding the 2023 Arnold Classic roster recently. Blessing Awodibu and Charles Griffen withdrew after the final competitors list was revealed. As a result, the IFBB issued new disciplinary action for athletes who drop out of invitational shows following roster announcements.

Kalecinski Not Worried About Size During 2023 Season: “If Weight Meant Everything, The Elephant Would Be King of the Jungle”

Kalecisnki explained that his weight/height cap for Classic Physique allows for another 6.6 pounds. However, he plans to take his time adding mass and mentioned ‘creating an illusion’ is what’s most important when displaying his physique.

“Yeah, for me, it’s also unbelievable but with hard work and big dreams in your head, you can make it, especially, if you’re from a small village in Germany. That’s what I always say,” Kalecinski said. “There is some room to grow. My coach and I have talked about it, and in Classic you only have some room to grow. For me, it’s still three kilograms more. I don’t know in pounds [6.6 pounds].

I would say to the limit, but we don’t want to get to six pounds in like one off-season so we take our time. Just stay with the lines I have and add more tissue on the right spots, and you can also create a great illusion with only three kilos you know. Weight isn’t always the thing. You need to create the illusion on stage, like Milos [Sarcev] said back in the day. He had like 105 kilograms and smoked guys who were 120 or 125 so, yeah. If weight meant everything, the elephant would be the king of the jungle,” says Urs Kalecinski.

Unlike Urs, Queiroz has less room to grow as a Classic Physique competitor. During weigh-ins for the 2022 Olympia contest, Queiroz had a close encounter with his height/weight cap. He initially missed weight by four pounds, but the issue was eventually resolved.

RELATED: Jay Cutler Guides Urs Kalecinski Through A Grueling Shoulders And Triceps Workout Ahead Of 2022 Olympia

Kalecinski’s goal is to win as many titles as possible before he calls it a career. With added muscle tissue to his back and arms, Kalecinski aims to make a statement against Queiroz in March.