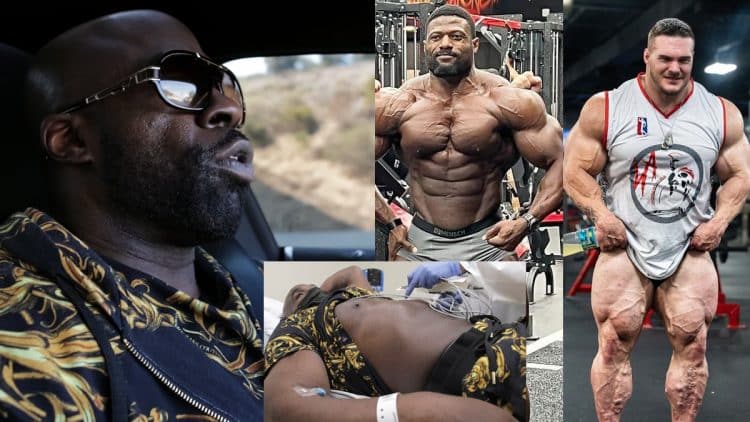 Kali Muscle, real name Chuck Kirkendall, has endured some serious health challenges in his journey as a bodybuilder. In a recent YouTube video, Kali Muscle shared the tests he got at the hospital and warned people against bodybuilding.

The fitness influencer first gained attention online for his insane physique. His outspoken personality quickly amassed him over a million followers on Instagram and 2.75 million on YouTube. From serving time in prison to becoming a major figure in the bodybuilding community, Kali Muscle has come a long way.

In the process of keeping up with mass monsters, Kali suffered a major health scare. Last year, he had a heart attack after his left artery got 100% clogged. He was able to resolve the issue and managed to recover, fortunately. However, the incident left a lasting impact on Kali as he continues to warn up and comers in the sport against embarking on a bodybuilding journey.

There has been a surge in the number of deaths in pro bodybuilding, with heart issues being one of the most common causes of death. The 2018 Mr. Olympia Shawn Rhoden passed away from a heart attack last November. Many have expressed their concerns surrounding the troubling issue and what can be done to manage it.

In the past, Kali voiced the health risks associated with the sport after the passing of Cedric McMillan. He openly talked about his experience using PEDs (performance-enhancing drugs) in 2009 and argued against taking any substance that has negative implications for the body.

In a recent video uploaded to his YouTube channel, Kali Muscle shared his trip to a pair of hospitals.

“I’m doing today an angiogram then I’m doing a PET test to make sure the arteries and all that are open.”

“This test is intravenously injected in me. They’ll put me through this donut-type x-ray CAT scan thing. It’s similar to the next one I’m getting, which is the PET scan… This is a hell of a test man. They shoot that stuff in you and that thing will pick up if your arteries, veins, open everything. Heart attacks and all are preventative. People come do this type of stuff, you can catch it.”

On Day two, he went to USC Healthcare to meet with a heart specialist for a preventative checkup. Then, he went to get a PET scan, which he described as “one of the most needed tests when you have clogged arteries.”

Kali Muscle preached about eating less and pointed to bad diets as one of the most common causes of early death. He continued to issue a stern warning to bodybuilding competitors about the dangers associated with steroids.

“The cause for most of this is food. People on the internet say steroids, this and that but what about all the millions of people that die every year that never touched a steroid? We only know a few bodybuilders ultimately that died or bodybuilders that speed up the process because they eat a ton more food. They’re stuffing themselves with six to eight meals a day so you’re going to have an early death.

“Most deaths in America are heart-related. Bodybuilding, that’s what it’s about. It’s eating a sh** ton of food, drugs on top of it.”

“What we put in our body is everything. Years of fast food, ramen noodles, it will catch up to you. My recommendation through all of this is to eat healthy. 99 percent of my diet is fish, rice, veggies, and fruit. Everything else is just entertainment and me acting.”

Kali Muscle name dropped Nick Walker and Andrew Jacked, saying he ‘feels sorry’ for them considering the risks they are taking while crafting a better physique.

“I would say start getting these tests at 35 and get it every five to ten years. I never foresaw myself going to doctors, taking pills everyday. Now, I wish I never did that bodybuilding stuff, competing in shows. I feel for these guys. Everybody’s like, ‘oh have you seen Andrew Jacked, Nick Walker?’ When I see them, I feel sorry for them. I wish I would have never had bodybuilding. I’m pure example, I’m living.

“Shawn Rhoden, Cedric McMillan, and all of them aren’t here to talk about it. Bodybuilding is the last thing somebody should ever want to do. It’s stupid. Be smart. Eat as less as possible and drink as much water as you can but don’t overdo it either.”

Kali Muscle continues to warn athletes about the prevalent risks in the sport.  Apart from overeating, he is also against the rampant use of steroids. He shared the ‘raw truth’ from his personal experience using gear and warned that “if you’re a bodybuilder, you’re risking your life.”

He reiterated a similar sentiment in August when he sent a serious message advising competitors to take care of their health first and to not be a “test dummy.”