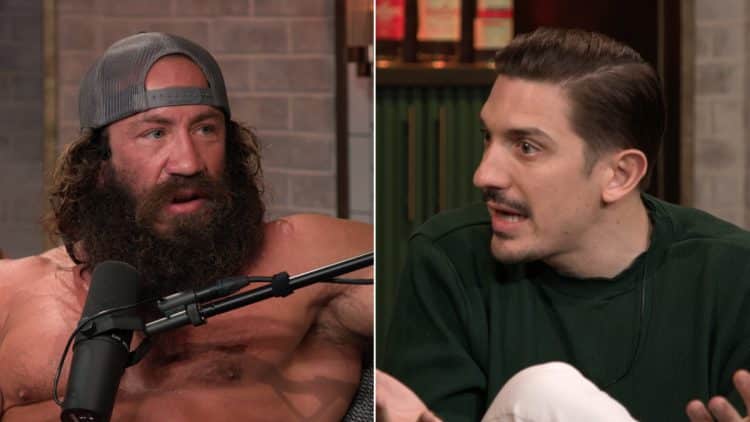 Internet sensation Liver King had a rise in stardom like no other. In a recent appearance on Andrew Schulz’s Flagrant podcast, King responded to Derek of More Plates More Dates after being exposed for steroid use. He also addressed the criticism he received from his confession video.

Liver King, real name Brian Johnson, went viral for eating raw cuts of meats and organs on social media. He promotes an ancestral lifestyle, which is made up of the nine ancestral tenets. King collaborates with many celebrities, including fitness influencer Jesse James West and encouraged them to follow in his footsteps by munching on raw liver, brain, and other meats.

Considering how muscular he is at the age of 45, there was speculation about King’s natty status. He strongly refuted allegations of potential steroid use on a number of occasions. While some accepted Liver King’s claims, UFC color commentator Joe Rogan was convinced King had an a** full of steroids.

In a recent appearance on Andrew Schulz’s Flagrant podcast, Liver King revealed what he texted Derek of More Plates More Dates after being exposed for steroid use.

“As soon as this happened, I called Derek, he didn’t answer so I sent a text, ‘hey man, I just want to thank you.’ Then he answers. Actually the first thing I said was hey, he said hello. I asked him, ‘how f**king long did it take you to make this documentary?’ He goes, ‘weeks.’ I said, ‘you spent weeks making this? I think it’s brilliant and I want to thank you. I don’t know what good will come of it but good will come of it.’ I have this opportunity to be completely honest with my boys. I’ve been lying to my own boys about this.”

“Of course, I’m going to own it. Now I have a deeper sense of obligation and responsibility to remain to my true north, to get the message out… I deserve the (pushback). They should be resentful about it. I apologized because I lied, deceived people, misled them and I own it. I deserve ts all. What I would say to anybody who wants to retaliate, go somewhere else. You gotta be loyal to the fact that people are hurting and hitting at record rates.”

“I believe so deeply in this message, the nine ancestral tenants and ancestral living. To answer your question, yes, (I am willing to go natty).”

“I f**ked this whole thing up. I’ve learned from this. The thing I learned from this is I’m not doing this again. Forget that sh*t. Now I got this responsibility, this obligation. There’s so many silver linings in it. Do you know how much better this would be for my health?

“The thing is I have this opportunity to never go back to that f**king place where I lied about sh*t and this is my commitment.”

Following Derek’s exposé, King stated he was grateful in a weird way. He later issued an apology video, where he conceded he was not natty. He confessed to being on gear and having used steroids in the past. However, the apology was not well received by some, including Derek and Rogan, both of whom put him on blast for making money off the lie.

Liver King opened up about the importance of improving on issues as serious as suicide and self-harm.

“Here’s what I remember in middle school my bus driver killed himself. Every day prior to that I remember looking in the just wishing I wasn’t this guy; zero self worth, totally humiliated, and embarrassed of the human I had become. When he killed himself, now I knew it was possible and I knew the world would be better without me.

A couple years later, my best friend’s brother killed himself. I’ve had talks in my family about people wanting to kill themselves. Just last week, we had a 14 year old girl close to the family kill herself. Nobody wants to talk about this.

“Why the f**k are people not talking about this? 4,000 people a day do it. 80,000 people a day try to do it. Somewhere along the continuum people are suffering and struggling at record rates. This is what I would say back. No. 1, this is why I’m here, the only reason I’m here. Secondly, when somebody has the opportunity to talk about it you better talk about it. It’s dangerous and irresponsible if you don’t.”

The last few weeks have been a rollercoaster for Liver King. While things may appear to be slowing down, Derek believes that the steroid scandal is not yet over and that there’s “definitely more stuff out there.”