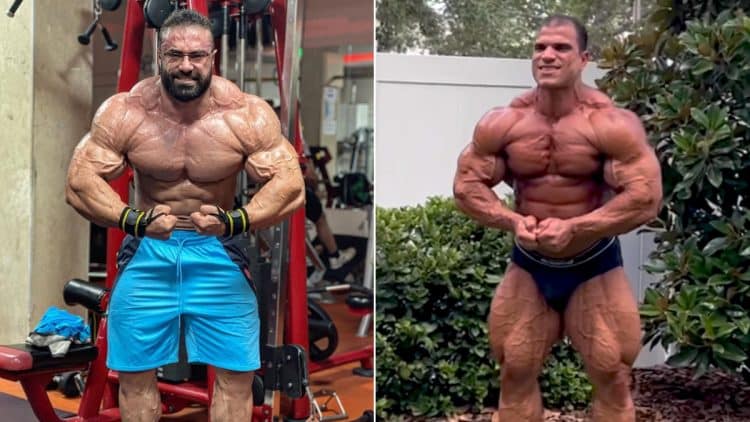 Bodybuilders Hassan Mostafa and Behrooz Tabani are out of the 2022 Olympia, albeit due to a different set of reasons. The most prestigious bodybuilding competition is set to take place in Las Vegas from Dec. 15 to 18. The organisers moved the venue to Florida in 2020 and 2021 due to the Covid-19 pandemic. However, Dan Solomon revealed the dates and venue for the show earlier this year to the pleasant surprise of many.

The Olympia weekend is less than one week away and all the competitors are in the final phase of their prep to bring the best package on stage. Last minute cancellations or pull-outs affect competitors more than the fans of the sport. However, they are a part and parcel of the game and this time, it is Hassan Mostafa and Behrooz Tabani.

Mostafa is an Egyptian IFBB Pro bodybuilder that kickstarted his IFBB Pro bodybuilding career with a third-place finish at the 2019 Indy Pro and grabbed attention for his insane conditioning and size. After three consecutive third-place finishes at the 2021 New York Pro, California Pro and Puerto Rico Pro, Mostafa finished the 2021 competitive season with a 13th place at the Olympia. After earning a well deserved win at the 2022 Orlando Pro, he earned a direct qualification to the 2022 Olympia. Recent physique updates showed that Hassan Mostafa was heading in the right direction as far as his competition prep goes. However, in a recent YouTube video, Mostafa confirmed that pulling out of the competition will be in the best interest of his long term health.

According to Mostafa, he had severe diarrhoea and later bloody diarrhoea following an untimely stomach infection and got severely dehydrated.

“I went to get it checked out to see what’s wrong. It turned out to be the virus that caused decline in the health of my kidneys. Combined with the dehydration from bad diarrhoea, it put me in a bad place. So the doctor recommended that I stop the prep and refrain from putting my body through any dehydration in the next few weeks,” Mostafa expanded.

Cutting water weight is an essential component of bodybuilding competitions. In the light of severe dehydration and kidney problems, the doctor recommended otherwise.

“Critical things like using the sauna had to be stopped as well to help the kidneys get rid of water on its own through urine, instead of getting rid of fluid through other ways like excessive sweating,” Mostafa explained.

However, Hassan Mostafa did the blood work and talked to a few doctors. He soon realized the extent of danger he was in. The doctors told him that going through with the prep will only damage the kidneys further. This also increased the risk of raising the potassium levels in the body.

“So I can’t risk my health and have this be the last Olympia for me. My goal is to compete for many more years,” Mostafa said.

Mostafa does not have enough time to recover from the health issues and prepare for the 2022 Olympia. As a result, he took the decision to withdraw from the show to focus on health.

Iranian IFBB Pro bodybuilder and Men’s Open division competitor Behrooz Tabani’s 2022 Olympia goal also seems to be hanging by a thread. Tabani qualified for the 2022 Olympia by winning the 2022 Romania Muscle Fest Pro which was the last Men’s Open qualifier for the 2022 Olympia. Tabani defeated the likes of Brett Wilkin and Enrico Hoffmann with exceptional conditioning en route to the win.

“At this point only a miracle can help my dear friend and athlete, Iranian bodybuilding superstar @ifbbpro_behrooztabani, who is qualified for the 2022 Mr Olympia and should rightfully be able to compete (as he earned that right 🙌)…but he is more than likely going to be denied, just like @hadi_choopan was back in a day.

It breaks my heart for Behrooz and ALL Iranian bodybuilders, athletes and people in general. As it stands right now – his US VISA application is refused for administrative processing under section 221 (g) of the United States Immigration and Nationality Act.

The Embassy notified him they’ve received additional required information and his case will undergo administrative processing- which can take days to months and sometimes even longer. He doesn’t have that time 😣😔😞. Can ANYONE (!) please HELP? 🙏🏻❤️🇮🇷 /Video I made was back in 2017…

Hadi made it to his first Olympia in 2019 and as everyone knows left an absolutely huge impact in the last 3 Mr Olympia Competitions. Let’s help our Iranian brothers of Iron be able to challenge us all and make a living from the sport/” Milos Sarcev wrote in the caption to his Instagram post.

Due to the tense geopolitical equation with the USA, the Islamic Republic of Iran faces sanctions. Travelling to and fro between Iran and the US allied countries is also a major issue. Men’s Open division competitor Hadi Choopan has also faced a lot of troubles due to the same previously. According to Coach Hadi Choopan, he was able to reach the USA just one day before 2020 Olympia. Milos Sarcev has urged those who can to help Behrooz Tabani get the visa.

With the time running out of hand, it seems a difficult task for anyone to pull off. Understandably, geopolitical issues cannot have quick fixes. However, let’s hope that Behrooz Tabani and other Iranian athletes don’t have to face these problems in future.