Andrew Jacked Promises ‘The Best is Yet to Come,’ Will He Live Up to The Hype at 2022 Mr. Olympia?

Jacked and his coach George Farah are both promising his best physique yet for 2022 Mr. Olympia. 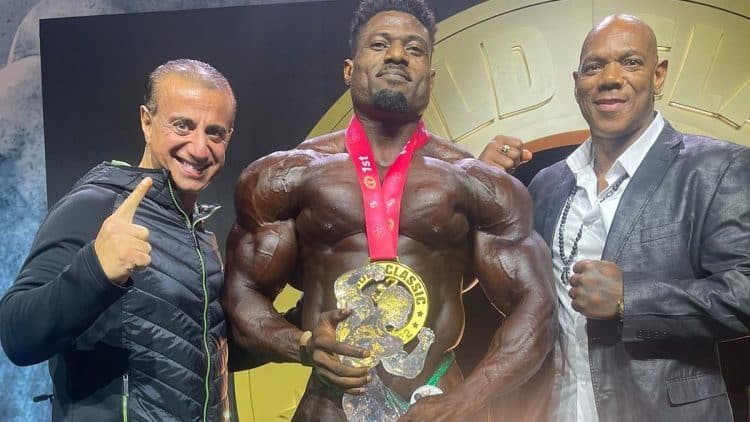 Andrew Jacked has led one of the most successful rookie seasons the sport has seen. In a recent Instagram post, Jacked and his coach, George Farah, reflected on his victory in Birmingham at the 2022 Arnold UK and promised the “best is yet to come.”

Jacked emerged on everyone’s radar in March, when he earned his Pro card at the 2022 Arnold Classic Amateur event. In preparation for the contest, he trained alongside four-time Arnold Classic winner Flex Wheeler. Jacked also enlisted the help of George Farah, who continues to coach him through the nutritional aspects of dieting.

In August, his momentum snowballed after claiming the 2022 Texas Pro title. He was tasked with facing runner-up Martin Fitzwater, who pushed Andrew but ultimately struggled with his shape and aesthetics. Weeks later, Visa issues temporarily left Jacked unsure if he’d be able to compete in Europe. After hearing the news, Fitzwater thought Andrew was ‘bi***ng out’ of the contest.

Despite the uncertainty, Jacked didn’t let up during training sessions leading up to his latest showing. Prepping for his third event of the year, Andrew turned heads with a brutal leg workout. Over the weekend, he won the 2022 Arnold UK title, and while many expected Fitzwater to be his biggest challenge, instead Jacked’s top threats turned out to be third place James Hollingshead and runner-up Patrick Johnson.

According to Jacked and his coaches, the world has yet to witness his true potential. With 2022 Mr. Olympia in 12 weeks, Jacked and Farah guaranteed the bodybuilding community that he will bring an even better package to Las Vegas later this year.

Andrew Jacked Promises to Be at His Best for 2022 Mr. Olympia

“Finally got a copy of my routine😅, can’t be more prouder of myself as I continue to progress and self create this routines in very short period.

I only create my routines few days to showd ay as it enables me to be better, longer creation of routines always end up being reshuffled few days to show day and I learnt my lesson my first show in The Ohio Amateurs 2022
3 shows 3 Routines, best is yet to come!!!” wrote Andrew Jacked.

Jacked said his biggest challenge for his latest show was crafting posing routines in a short amount of time. He prefers to create posing routines a few days from a show instead of perfecting them over a number of weeks.

Coach George Farah agrees with Andrew and says they have “plenty of time” to make improvements or adjustments for his first Mr. Olympia contest.

“Congratulations “my big little bro” @ on winning the Arnold’s classic UK. Feeling you can not describe in writing. Yes you heard that right, 2 for 2 baby 😍.

In less then 7 month of turning pro and many thought that Andrew would not live up to the hype he won the Texas pro and now the Arnold’s and I promise you haven’t seeing his best yet.

Andrew’s presence in the IFBB Pro League has already prompted many figureheads in the sport to discuss his potential. Four-time Mr. Olympia Jay Cutler was one of them. He compared Jacked’s back to reigning Mr. Olympia Big Ramy’s and said he believes Andrew could be a future Mr. Olympia winner.

Decorated bodybuilding coach Milos Sarcev also sees a bright future for Jacked. Milos believes there’s “nothing missing” on Jacked’s physique and named him an immediate contender for the title when he makes his Olympia debut in December. Even one of his competitors — Iain Valliere has stated that it’s “highly likely” Andrew will make the first call-out at the prestigious show.

This year’s contest has the ingredients to be one of the greatest in the event’s history. Even though he’s performed at three shows this year, Jacked and his coach are confident he can make improvements to his package in the coming weeks.