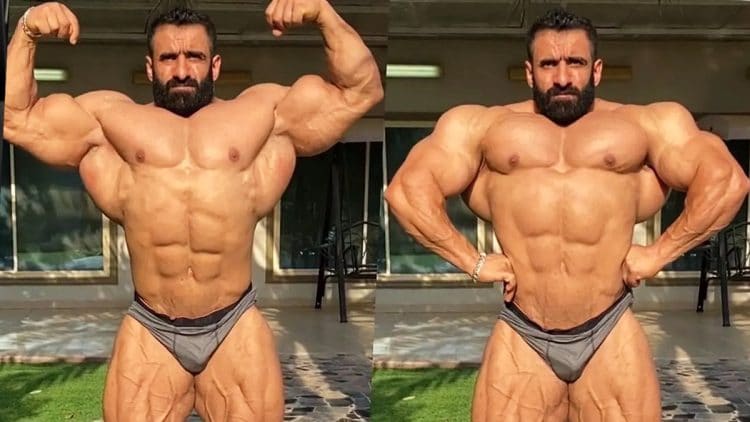 Going into the 2022 Olympia, scheduled for Dec. 15-18 in Las Vegas, NV, Hadi Choopan is considered one of the front runners to win the show. The bodybuilder is known for his signature conditioning, tiny waist, and broad shoulders.

However, the latter aspect of the Persian Wolf’s physique has come under scrutiny, thanks to his former managers, Hadi and Mahdi Parsafar.

Choopan’s erstwhile managers are contending he injects synthol to make his muscles appear bigger and fuller. Furthermore, Hadi Parsafar went as far as to call him the “Synthol People’s Champion” in one of his Instagram stories.

Hadi Choopan and the Parsafar brothers allegedly had a falling out because the brothers were supposedly selling products using Choopan’s brand, but without the bodybuilder’s consent.

Things apparently went out of hand when The Persian Wolf allegedly reported Mahdi’s YouTube channel for copyright violations, leading to the channel being taken down.

Check out Mahdi Parsafar’s first post about their fallout:

Here is a translation of the caption:

In a clumsy act, he reported our personal videos taken with a personal camera.

Now, wait for the consequences of their crazy actions!

When someone who has a flower and cannabis garden is consulted, it will result in such a ridiculous and clumsy action!”

On July 3, 2022, Mahdi Parfasar took to his Instagram page to shed more details about their disagreements. Check it out below.

And it grew for years with different content that had nothing to do with this illusion!

And later, with the grace of my servant, they were allowed to earn money, but he didn’t do all his work with a bad taste, and he admitted that he was a filter in Iran!

Later, when he was accused by those around him that the channel has huge income, he was greedy and first he kicked us out of the team, and secondly, he tried to justify the channel by cheating and correspondence with YouTube.

When his arrow hit the stone, he opened a separate channel and copied the videos and then started to enforce the copyright law and closed our channel!

In fact, I have no doubt that the copyright law is being misused. Hadi has no knowledge of the serious consequences of this violation!

The most important point is that the channel grew by one percent after using your videos and so on!

The main growth of the channel was before these trends!

In addition, all the videos, besides the fact that the copyright belongs to me, have been used with their full consent and they have never objected to this issue!

Can’t this be theft?”

Hadi Parsafar also let off some steam on social media through Instagram reels.

“I don’t want to waste time with Mr. Synthol and homeless. He has to come to the court and answer questions. He wants to get YouTube channel, but bury this wish.” — Hadi Parsafar

The channel was reportedly Mahdi’s personal YouTube channel before he rebranded it to be Choopan’s official channel after he started managing the bodybuilder.

However, after the fallout, Mahdi took back the YouTube channel but kept using Choopan’s videos for his personal business endeavors, which apparently did not go down well with the bodybuilder, who resorted to issuing copyright strikes on the channel.

Notably, Choopan hasn’t responded to any of the accusations.

Synthol use allegations are nothing new for Hadi Choopan. The bodybuilder has previously been accused of using the site enhancement oil on various occasions.

Many people believe Choopan injects synthol in his medial delts, giving them their unnatural angled shape. Experts believe the bodybuilder’s third-place finish at the 2021 Mr. Olympia was due to his synthol use. He could arguably have beaten Brandon Curry and given Big Ramy a run for his money were it not for his pointy shoulders.

The Persian Wolf is coached by Hany Rambod and is currently going full steam ahead to secure the Sandow at the 2022 Olympia. He is reportedly adding size for the showdown, making him a serious threat for the reigning Olympia champ, Big Ramy.

While there is no hard evidence for Choopan’s synthol use, the Parsafar brothers’ insider information could add fuel to the fire and make bodybuilding fans believe the rumors.

Hadi Choopan is expected to step on stage next at the 2022 Mr. Olympia. While it is unlikely that this controversy will affect his placing at the bodybuilding’s biggest show in December, we will keep you updated as this story develops.

Next Read: Hadi Choopan Was ‘The Best Conditioned Athlete’ At 2021 Olympia, Says Lee Haney And Others