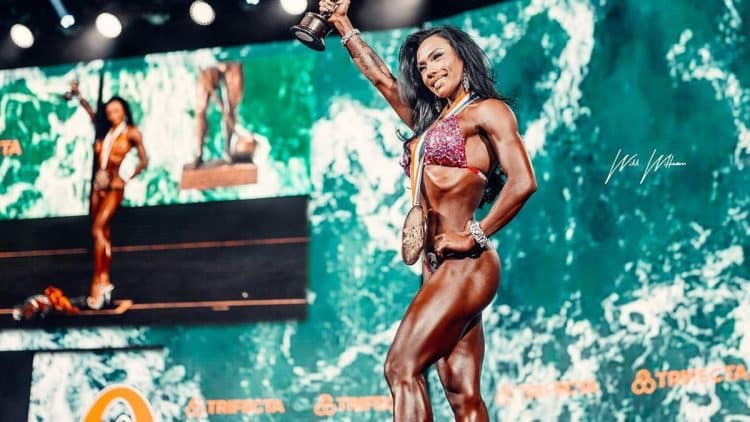 The 58th Olympia, scheduled between Dec. 15-18 in Las Vegas, NV, hosted the 13th edition of the Bikini Olympia. The Bikini Olympia is one of the most popular divisions at the sport’s most prestigious show.

54 Bikini girls graced the 2022 Olympia stage to stake their claim at the Bikini Olympia throne. Reigning champ Jennifer Dorie was the favorite going into the show, and many fans and experts expected her to pick up her second consecutive Bikini Olympia title at the 2022 Olympia. However, Maureen Blanquisco had plans of her own and upset the reigning champ to win her maiden Olympia title.

Janet Layug, Lauralie Chapados, Elisa Pecini, and Ashley Kaltwasser were considered the biggest threats to Dorie’s Bikini Olympia throne. Four Bikini Olympia champs locked horns at the 2022 Olympia to add another O title to their kitty. However, it was Blanquisco who emerged victorious in the end.

2022 AC Bikini International champ Lauralie Chapados is known for her chiseled figure, and she brought her best package to the 2022 Olympia stage. Chapados took home the fifth-place award at the 2022 O. She had finished runner-up behind Dorie at the 2021 O.

The 2020 Bikini Olympia champ Janet Layug was in the first callout but couldn’t find a spot beside the top contenders in the confirmation round.

Blanquisco, Hill, Ashley Kaltwasser, and Dorie received the final callout at the pre-judging at the 2022 Bikini Olympia, making them the frontrunners to lift the Bikini O title.

Maureen Blanquisco brought a complete package to the 2022 O stage. The short figure played to her strength and was rewarded by the judges for it.

Blanquisco hit the ball out of the park with her perfect balance, shape, and stage presence. She drew eyeballs from the moment she stepped on bodybuilding’s biggest stage.

Blanquisco’s win at the 2022 Olympia makes her the 10th Bikini Olympia champ in the division’s history.

Notably, the Bikini O title has not been defended successfully since Angelica Teixeira won her second title in 2018.

Given below are the top 5 Bikini O results: