Men's Open Bodybuilders that can perform beyond expectations at the 2022 Mr. Olympia. 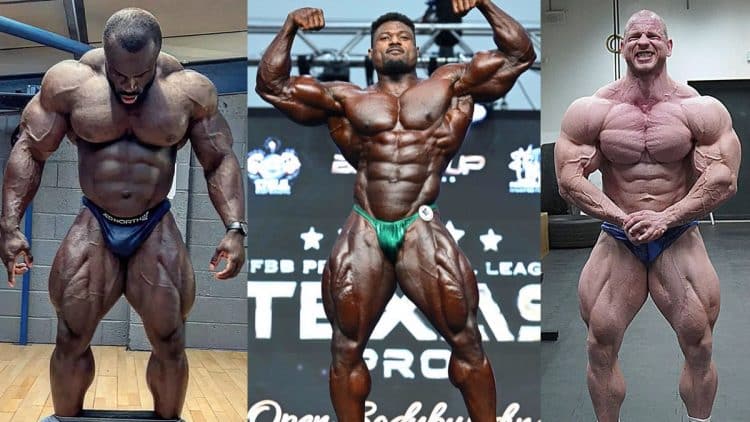 The 2022 Olympia weekend is at our doorsteps and the suspense and excitement surrounding the event is through the roof already. Olympia is the most prestigious bodybuilding competition in the world. It is a proving ground for the best talent that the sport has to offer. The event will take place from Dec. 15 to 18 in Las Vegas, NV after shifting its base to Florida in 2020 and 2021 due to the global pandemic.

Admittedly, it is customary to promote any event as the best ever. However, nobody can deny that the Men’s Open division at the 2022 Olympia genuinely has the best line-up of competitors that will be talked about for a very long time. Veteran bodybuilders like reigning and 2-time Mr. Olympia Mamdouh ‘Big Ramy’ Elssbiay, Brandon Curry, and William Bonac are still going strong in their careers. Hungry lions Nick Walker, Hunter Labrada, and Hadi Choopan have established themselves as perennial contenders and seem all set to carry the torch. The addition of some highly touted prospects has enriched the Men’s Open division further which also threatens to shake up the division and establish a new order.

The stacked roster has the oddsmakers and experts scratching their heads about all possible outcomes. Naturally, not everyone is going to rise to the top. However, there are competitors that do not have a proven track record in the division but they do have what takes to become a top contender or even wear the 2022 Mr. Olympia crown. In this article, we take a look at some ‘Dark Horses’ that can push through the rankings and emerge as a force to reckon with. So without further delay, let’s take a look at five such competitors.

One of the bodybuilders gearing up for the Olympia debut this year is Samson Dauda. ‘The Nigerian Lion’ earned himself quite a few podium finishes in the 2021 competitive season and gave Nathan De Asha everything he could handle at the 2021 Arnold Classic UK, finishing second. The bodybuilding community could not help but marvel at the crazy size and muscle mass of Dauda. While he has not been as open about his competition prep and trained behind an iron curtain, for the most part, Dauda bulked up to a massive 300lbs-plus at the end of the off-season in a bid to place inside the top ten at the 2022 Olympia. His recent physique updates show sharp conditioning and excellent separation in the muscles.

Veteran bodybuilder Chris Cormier feels that Dauda’s mid-section can be an issue. However, he believes that if Dauda can control the mid-section, he ‘can do damage’ at the 2022 Olympia. The ‘Nigerian Lion’ is one of the competitors that can absolutely play the size game and emerge on top. Samson Dauda can derail many hype trains this weekend, so keep an eye out for him.

When it comes to pro-wrestling style trash talkers, Blessing Awodibu can seem like one of those individuals who try to grab the attention of his audience in order to achieve the recognition that he desires. However, there is more to the Boogeyman that meets the eye. Awodibu had to take a pretty long route to his maiden Olympia appearance due to a multitude of reasons but he finally arrived on the scene. The Irishman’s legs were admittedly the weakest part of his physique but he has made significant improvements. The 2022 New York and Indy Pro win speak for that.

The rise of some hot prospects has stolen the spotlight from Awodibu in recent months. The Irishman is one of the smaller guys in the division. However, it is impossible to deny that he certainly has the conditioning, proportions, and muscle definition. If Awodibu weaponizes these attributes on stage, he can get past the mass monsters and at least stir up the rankings – if not win the Mr. Olympia title. The Boogeyman had fame and popularity long before becoming an IFBB Pro. His drive to achieve competitive success is the only thing motivating him which makes him a dangerous man. So watch out for him at the 2022 Olympia.

The massive size and a dominant stage presence give the Slovakian bodybuilder a solid advantage over most of the Men’s Open competitors. Krizo’s massive arms and a near-perfect v-taper are probably unmatched in the division. His physique has impressed veteran bodybuilders like Samir Bannout and Milos Sarcev which, of course, is not easy by a long shot. However, an obvious red flag about Krizo was his conditioning at the 2022 Amateur Olympia Italy and the 2022 EVLS Prague Pro. But recent physique updates show that conditioning may not hold Krizo back on the Olympia stage. The vascular and shredded look on Krizo’s physique will definitely place him in the top ten, to say the least.

The only thing going against the Slovak at this point is the inexperience of competing against THE BEST bodybuilders in the world. Krizo looked visibly exhausted while posing in Prague. But if he has taken veteran Samir Bannout’s advice and ‘tortured himself’ with posing during the prep, Krizo can be a real threat and even be in the first callout as 4-time Mr. Olympia Jay Cutler predicted.

What can we say about Chinedu Andrew Obiekia AKA Andrew Jacked that has not already been said? We don’t see a competitor with so little professional experience having so much intrigue around his name all that often. At 6ft-2in, the Nigerian bodybuilder is blessed with an unusually tall frame compared to most other competitors. But hold on. That’s not the only attribute he has. Literally, every single muscle on Andrew’s physique is well-defined. Additionally, the 37-year-old has an unbelievably wide upper body that perfectly narrows down in the waist area.

Right from earning the IFBB Pro card to winning the 2022 Texas Pro and getting the Olympia qualification, Andrew Jacked has done a great job of bearing the burden of expectations on his shoulders. Veteran bodybuilder Samir Bannout is so impressed with the 37-year-old that he even predicted that Andrew Jacked will ‘automatically make it into the top four’ at the 2022 Olympia. 4-time Mr. Olympia Jay Cutler follows the sport with a keen eye and believes that Andrew will ‘beat everyone except Big Ramy’ at the show.

It is not a mere fantasy to imagine that the Nigerian bodybuilder will hold the Mr. Olympia title at some point in the future. Andrew himself is confident that reigning Mr. Olympia Mamdouh ‘Big Ramy’ Elssbiay will fight for the second spot at the 2023 Olympia. While that is still one year away, don’t be surprised if Andrew Jacked makes a statement at the 2022 Olympia and emerges as an immediate contender in the Men’s Open division.

Only a handful of bodybuilders in the Men’s Open division are capable of bringing a physique that can go up against the complete package that Derek Lunsford has. Lunsford is good literally everywhere as he is aesthetically perfect with a wide back and shoulders, a narrow waist, and a perfect lower body. The reigning 212 Olympia champion is set to make his Men’s Open debut at the 2022 Olympia and you can’t be further from reality if you believe size will hold him back. Lunsford looked comparable, if not equally big, with Nick Walker and Hunter Labrada during the 2022 Pittsburgh Pro guest posing.

Veteran bodybuilders Chris Cormier and Ronnie Coleman have already prophesied that Lunsford can not only ‘shake up the division’ but also pose ‘the biggest threat’ to reigning Mr. Olympia Big Ramy at the 2022 Olympia. Aside from Brandon Curry, Lunsford, who is the 212 Olympia champion, can also provide a competitive challenge to Big Ramy this year. He has the experience of winning at the highest level. Additionally, Lunsford knows how to use posing to beat different body types. So look out for Derek Lunsford at the 2022 Olympia. Don’t be surprised if he makes his way into the top five with excellent conditioning and aesthetics.

The clock is ticking fast and it is just a matter of time before the 2022 Olympia weekend kicks off. It is impossible for hardcore fans to be at peace until then and understandably so. Please take a moment to share with us who you think is going to do better than expected this year and why. Feel free to share your thoughts and opinions in the comment section below.