'The Underground King' Eddie Alvarez shared an interesting conversation he had with Liver King last year. 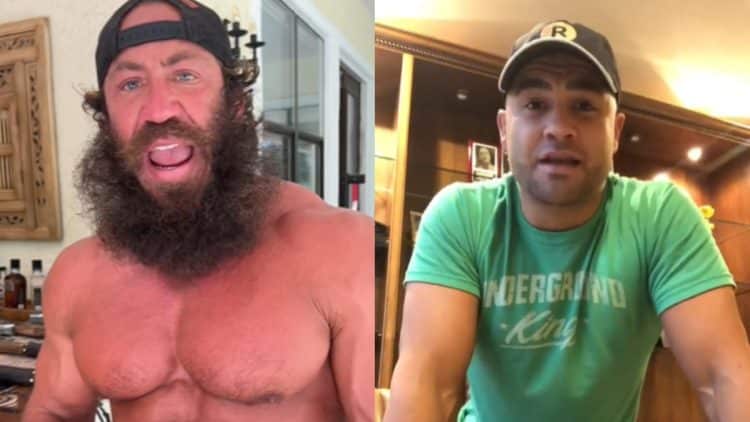 Former UFC and Bellator Lightweight champion Eddie Alvarez unearthed a head-scratching conversation he had with Liver King (real name Brian Johnson) last year. In a pair of private messages on Twitter, Liver King shot down Alvarez’s steroid allegations and told the MMA fighter that he’s never cheated or taken a shortcut in his life.

Over the past year, Johnson has gained a massive amount of publicity in large part due to his obscure lifestyle. He and his loved ones practice the nine ancestral tenets, all of which center around family, community, and health. The 45-year-old also regularly eats raw organ meats like liver daily, a practice he says is critical to living a happy and healthy life.

Earlier this week, Derek of the More Plates More Dates YouTube channel dropped a bombshell on the fitness community after a leaked email exposed Liver King’s alleged steroid cycle. According to Derek, who is revered for his knowledge surrounding performance-enhancing drugs (PEDs), Liver King’s natty or not status is no longer up for debate. In addition to a number of steroids, Derek, as well as many fans, were shocked to see Johnson spending up to $11,000 USD monthly for growth hormones.

Days after his alleged cycle leaked to the public, Liver King sent a statement via email to the Rolling Stones publication. In light of the news, Liver King said he was ‘in a weird way grateful’ that a topic this complex is being discussed at length. Eddie Alvarez, a mixed martial arts legend, recently looked back on one of the few encounters he had with the now-controversial fitness star.

UPDATE: Liver King Confesses to Steroid Use After Leaked Email

Eddie Alvarez to Liver King: ‘It Appears You Do A Ton Of Steroids or Growth’

“Hey brother, I love watching your stuff and so does my son, You seem incredibly health conscious, but it’s hard for me to neglect that fact that is appears you do an awful ton of steroids, growth or something unnatural to achieve this build. It seems like a complete shame to me to push conscious healthy eating and [a] fitness lifestyle while then injecting some of that stuff.

I’m super confused about your thought process on this and would love to hear some feedback. I am a true fan of what you outwardly represent but sincerely skeptical of what is really going on. ‘Underground King’ wrote Eddie Alvarez.

Sent this last year to the King himself 😂😂😂😂😂 https://t.co/FWLDlrRNpL pic.twitter.com/P86vfBfT7z

In a separate post, ‘The Underground King’ shared what Liver King said in response to his steroid claims.

“I’ve never cheated nor taken a shortcut in any capacity in life… you earn the life and wife that you behold. Most people think it’s impossible because they look like relative shit, despite doing movements that they call work (which isn’t)… my thesis is that if you commit to the 9 Ancestral Tenets, you will unlock the greatest version of yourself (your inner beast)… you will optimize your testosterone, your IGF-1, your DHT, key metabolic markers and you will achieve a higher version of yourself that is to behold too.

I believe in the ways of our ancestors…. we are descendants of the sole surviving species of genus Homo (the baddest mammalian predators that ever lived)” Liver King wrote.

The Liver kings response to my accusations last year pic.twitter.com/H6Z2JMonRI

Eddie Alvarez isn’t the only MMA fighter to take Liver King to task. UFC Middleweight contender Paulo Costa tested himself against the CEO of the Ancestral Lifestyle with a liver-eating contest. Defending his namesake, Liver King made short work of the challenge. However, after the smoke cleared, Costa claimed that Liver King cheated because he seasoned his raw meat instead of eating it as is.

If that encounter wasn’t enough, Liver King and former two-division UFC champion, Conor McGregor traded barbs online. After McGregor mentioned that he eats liver with ‘shots not forks,’ Johnson felt obliged to respond and told the combat sports star to never attack liver with such ‘ferocity.’

Alvarez, who appreciates many of Liver King’s ancestral tenets, said it was hard to ignore his steroid use even before the leaked email. In the weeks to come, hopefully, Brian Johnson can offer more insight on this ‘complicated-as-fu** topic.’