Cutler believes fans might see Phil Heath back on stage fighting for his eighth title at 2023 Mr. Olympia. 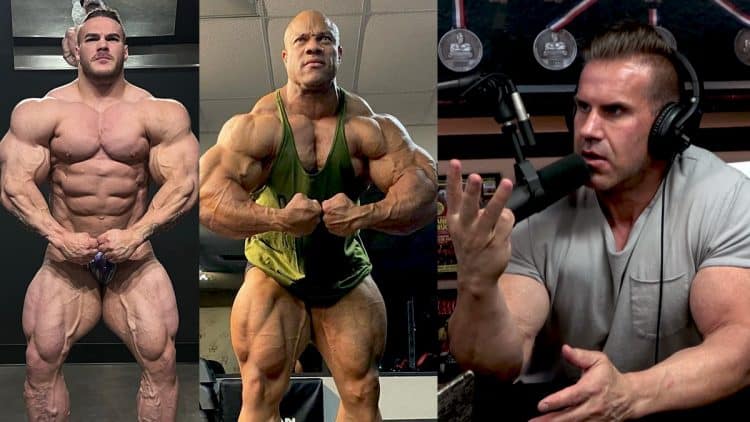 During his tenure, Cutler’s championship mentality led him to win a total of four Sandow trophies (2006, 2007, 2009, 2010) at the prestigious Olympia competition. His rivalry with Ronnie Coleman cemented his status as one of the greatest Men’s Open competitors of the 21st century.

One of Cutler’s successors, Phil Heath, was teasing a comeback following his last Olympia appearance in 2020 (3rd place). Even though he stopped competing a few years ago, Heath maintains a shocking level of mass. With consistent and impressive physique updates, fans would love nothing more than to see ‘The Gift’ back in his element competing again.

In May, rumors of Phil’s comeback made it to Cutler’s desk. However, the Massachusetts native quickly shot down Heath’s comeback chances. Moreover, Cutler said fans should stop questioning Heath about a potential return. At the time, Cutler added that Heath ‘was in a good place’ and that there was no point in coming back. Months later, it now appears Jay’s tune has changed about the seven-time Mr. Olympia.

Jay Cutler on 2023 Mr. Olympia: ‘You’re Probably Going to Have to Throw Phil Heath’s Name in There’

During the recent video, Cutler mentioned that he wants to ‘push’ Phil Heath to come back and compete next year.

“Unless Phil comes back next year. I want to push Phil to come back and compete in 2023. I still think he could do some damage,” said Jay Cutler.

“Yeah. Dude Dexter [Jackson] went till he was in the early 50s or whatever. I think the episode launched with him and Shannon Sharpe working out at Gold’s Gym in Venice. I saw some video on it. He’ll be doing the commentary [at 2022 Olympia] so it will be kind of cool to catch up with him.”

Cutler shared his thoughts on who is already qualified for next year’s Olympia. Noted by Manager Matt, all past Mr. Olympia champions are automatically invited back to the contest for a lifetime.

“So, 2023 — Brett Wilkin is qualified. Well, not necessarily [the first one qualified] because Phil Heath is still qualified. Brandon Curry [is qualified too]. You’ll probably have to throw Phil Heath’s name in there [2023 Olympia lineup] right,” Cutler added.

After teasing a return for Heath, Cutler said they plan to have him on the podcast soon.

“Your job is to first get him in this studio so [we can interview him]. Phil we can’t wait to see you man at the Olympia but hopefully that will episode number 54 or 55 – somewhere around there.”

Cutler remembered being angry and mission-oriented two weeks out from any Mr. Olympia show.

“I was training very angry at this point [two weeks out from Olympias]. I was on a mission right. I was avoiding people you know for a while I stayed in the background, and I trained in the middle of the night,” Cutler said.

According to Jay, Nick Walker‘s wow factor is more apparent in online pictures rather than seeing him in person.

“Being two and half weeks out now — I still get this vibe. Especially now, when we have — I walk in the gym and I see Nick Walker. It’s crazy because I see Nick Walker’s pictures online and he’s probably the most publicized guy with the physique right now because he’s putting out daily pictures and I see him in the gym, and I see him in a sweatshirt, and you just can’t imagine what he looks like under that shirt.

Because when I see him, he looks good. But then I turn around and I go home and I flip through Instagram and there’s the Nick Walker that I just saw hours ago posing after the workout and he looks crazy,” Cutler said.

Cutler has been open about some of his picks for the 2022 Mr. Olympia contest this year. Similar to Ronnie Coleman’s assessment, Cutler believes Mamdouh ‘Big Ramy’ Elssbiay will handily retain his Men’s Open title when the dust settles in two weeks.

Fans also thought Jay Cutler was on the verge of returning to a competition stage. After hitting a chest workout with influencer ‘Lexx Little,’ Cutler’s physique went viral at 49. Despite fan interest, the bodybuilding legend made it clear he won’t be returning for any bodybuilding contests — not even for Masters Olympia. For the time being, Cutler plans to get in the best shape of his life since retiring almost a decade ago.

All signs pointed to Heath’s respective comeback, but it was revealed in October that he would commentate on the upcoming 2022 Olympia contest. In one of his latest training sessions, Phil promised something ‘fuc**ng crazy’ for 2023. Cutler’s tone regarding Heath’s return has certainly changed so perhaps his return truly is on the horizon.