After rejoining his former coach Matt Jansen, "The Mutant" showcased his current power and strength nine weeks out from 2022 Mr. Olympia. 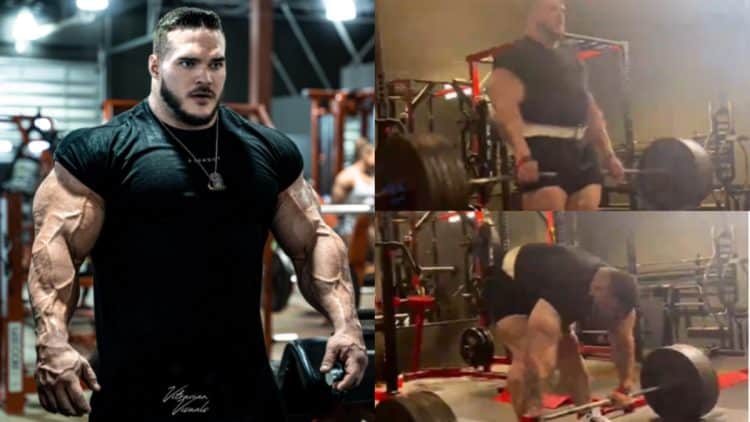 This year’s Mr. Olympia preparations are heating up and so are Nick Walker‘s training sessions. In a recent video, Walker annihilated a massive deadlift for reps nine weeks from 2022 Mr. Olympia.

Fans are highly anticipating Walker’s second Olympia appearance this December. In 2021, he managed to win back-to-back shows at the New York Pro and the Arnold Classic. As a result of his victory in New York, the 28-year-old earned an invitation to compete at 2021 Olympia — bodybuilding’s most important contest of the year. At that contest, Walker wrapped up a historic season with a fifth-place finish.

Despite taking time away to build his physique, Walker remained busy throughout the current bodybuilding season. In addition to guest posing at the Pittsburgh Pro, the New Jersey native trained with top-tier talent. During the off-season, he’s pushed the pace with reigning 212 Olympia winner Derek Lunsford as well as Kamal Elgargni, who recently tested the waters in the Men’s Open division earlier this year.

At the end of last month, Walker and his former coach Matt Jansen reunited. This came after reigning two-time Mr. Olympia Big Ramy continued to turn heads with a series of impressive physique updates. Before Ramy’s contest prep began, he revealed that he was weighing a colossal 337 pounds. Working against the clock, Nick Walker’s prep continues to intensify.

Nick Walker Shows Off Deadlift Strength in Contest Prep: ‘Threw Up A Little Bit After This Set’

In a recent post made to Instagram, Walker admitted that this was his second time deadlifting in almost a year. The lift was completed using wrist wraps and a weightlifting belt for a total of 10 reps.

“Ending hamstring day with some deadlifts

Threw up a little bit after this set. Second time deadlifting in I would say almost a year.” Nick Walker wrote.

Matt Jansen and a number of popular bodybuilders were impressed by Walker’s deadlift video.

With 2022 Mr. Olympia around the corner, bodybuilding veterans and figureheads have been giving out their predictions for the Men’s Open division. The general consensus among the community is that Big Ramy will win his third title. However, eight-time Mr. Olympia Ronnie Coleman believes Walker and Derek Lunsford to be definite wild cards ahead of the show.

Newcomer Andrew Jacked already made an impression in the league after winning two contests consecutively this year. Cutler contends that if Andrew brings up his back, he’ll beat everyone in Las Vegas this year except the reigning champion.

Meanwhile, Slovakia’s Michal Krizo is another athlete who many believe to be a huge threat. In fact, former Mr. Olympia Samir Bannout suggested that Krizo has bigger arms and a better v-taper than Walker. Bannout is so confident in Krizo, he says he’ll win Olympia in his debut should he qualify before the deadline (November 20, 2022).

Rival Hunter Labrada is on Nick Walker’s radar as well. He narrowly defeated Walker at Olympia last year when he placed fourth. Hunter, son of bodybuilding Hall of Famer Lee Labrada, has added mass and muscle density to his chest as he eyes his third Olympia appearance.

Throughout the season, it seems when Labrada shares a physique update, Walker follows suit, and vice-versa. Whether it’s the off-season or contest prep, they both keep fans updated on their progress. They briefly trained together months ago and made it clear that they intend to face each other at 100 percent.

Bodybuilders such as Johnnie Jackson, Dallas McCarver, and eight-time Mr. Olympia Ronnie Coleman are famous for deadlifting heavy weights as part of their training regimes.

Moreover, the Vertical Diet’s founder Stan Efferding is among the strongest deadlifters in the world, having lifted a total of 1,010 kgs raw in 2011 and 1,044 kgs in 2013 at 125 kgs in the raw/wraps division.

With Jansen back in his corner, Walker’s objective is to bring the best package of his career. If his latest deadlifting video is an indicator of his progress, “The Mutant” is on his way to making that goal a reality.