Fireworks went down at the 2022 Mr. Olympia Press Conference as the top Men's Open competitors sized each other up one final time. 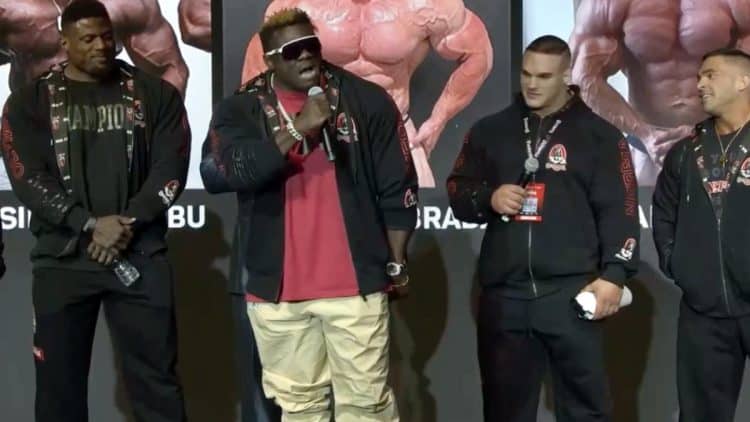 Open Bodybuilding has taken over Las Vegas days before the competitors battle on the 2022 Mr. Olympia stage. At Thursday’s Olympia Press Conference, bodybuilders Nick Walker and Blessing Awodibu traded barbs while Andrew Jacked and Iain Valliere took part in their own fiery exchange.

Joe Weider’s 58th Olympia Fitness & Performance Weekend is happening from Dec. 15-18, and bodybuilders from 11 categories have gathered to compete for the sport’s most coveted title. The press conference took place on Thursday (Dec. 15, 2022) and there were a few athletes in attendance who were keen on making powerful impressions.

A former rivalry that was seemingly squashed resurfaced in the form of Blessing Awodibu and Nick Walker. In addition to those two sharing words on stage, ‘The Boogieman’ even went back and forth with the reigning two-time champion Mamdouh ‘Big Ramy’ Elssbiay. The action didn’t stop there. Iain Valliere called out IFBB newcomer Andrew Jacked for predicting he’d make the first call-out.

Check out some of the most exciting interactions from the 2022 Mr. Olympia Press Conference below:

According to Jacked, Iain Valliere bad mouthed his accomplishments during prior episodes of Fouad Abiad’s Bro Chat bodybuilding podcast.

“Some fools just keep running their mouth and saying some bullshit, and Iain [Valliere] is one of them, and where is his friend Fouad [Abiad] they said stuff about me before the Texas Pro, and then what happened, they ate their words. And they said the same thing about me before the U.K [Arnold Classic] too. Action speaks louder than words.”

“I’m the only person in the Open division that has done all three wins in a row in seven months. So, stay tuned for tomorrow!” Jacked said. “I don’t want to be the biggest and the baddest, I just want to be the prettiest, the cutest and the sexiest — that’s why the Mona Lisa will be on full display tomorrow. Full display.”

Valliere was asked if Jacked would make the first call-out and he hesitated to answer, which Jacked found humorous given some of the commentary Valliere voiced throughout the season.

“I’ve been here, I’m battle-tested,” says Valliere. “I think [what I say on my podcasts] it’s my opinion, I give it straight up how it is. If you like it, you like it, if you don’t, you don’t. That’s how it is,” says Iain Valliere.

“I’ve talked the talk and I’ve walked the walk — and history is there. So, let’s see what happens tomorrow. He gives predictions for everything, but he can’t give predictions for tomorrow. Let him talk the talk, I’ll walk the walk,” Jacked said.

Blessing Awodibu and Nick Walker Fire Shots At Each Other

Awodibu and Nick Walker continued the rivalry that started back at the 2021 New York Pro.

“He calls me brick because supposedly I have a wide waist,” Walker replied.

“I was born ready,” said Walker.

Blessing and Walker got even more fired up as the conference went along.

“It’s going to happen. Friday night, I’ll break you down.”

“With legs like that, you’ll break yourself down,” said Walker.

Nick Walker gave his thoughts on all of the mayhem.

“I will 100 percent be in the first call-out,” Walker told Bob Cicherillo. “I do think I should have beat Hunter last year.”

“Someone turn this damn mic up, I was back there falling asleep, that was boring!” said Awodibu. “You’re talking… you’re talking…”

“There’s no business to be finished. I don’t talk to people in the third call-outs,” said Walker. “That’s why you talk so much because you won’t ever beat me.”

Blessing Awodibu and Big Ramy Go Back and Forth

During the conference, Ramy and Awodibu exchanged pleasantries.

“Last man standing, I like that. I’m The Boogieman so you already know. I’m down here for all the smoke. I like [Brandon] Curry,” Blessing Awodibu laughs. “It’s cold out here but I’m the Boogieman. I brought all that Florida heat! I got that big boogie energy baby.”

“Yeah I believe ‘The Boogieman’ will make some big damge [but] behind us,” says Ramy. ”

Before the chaos ended, Brazilian IFBB star Rafael Brandao gave out some early Christmas gifts to Hunter Labrada, Big Ramy, Nick Walker, and Blessing Awodibu. It ended up being a box of tissues, which he told them to use after he beats them on Saturday night.

If the press conference was a sign of what’s to come at 2022 Mr. Olympia, the show is on track to be one of the most exciting in Olympia history. Hopefully by the time finals wrap up, the ‘rivalry round’ that Chris Cormier called for comes to fruition.