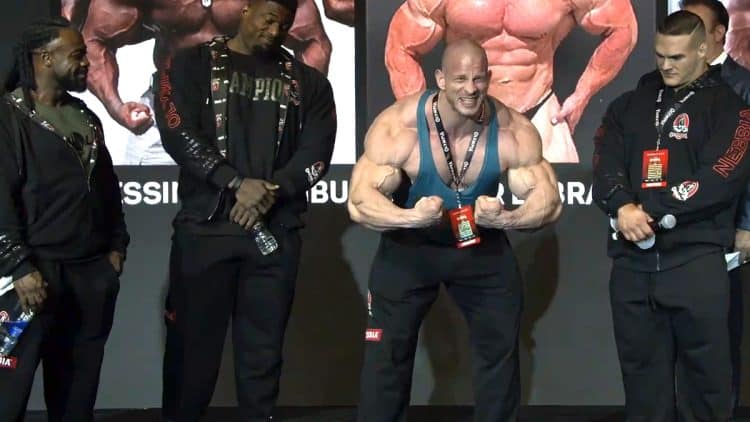 Slovakian bodybuilder Michal Krizo has become one of the main talking points for this weekend’s 2022 Mr. Olympia, scheduled for Dec. 15-18 at Planet Hollywood Resort & Casino in Las Vegas, Nevada. At today’s press conference, Krizo fired shots at the competition with a final physique preview.

Krizo first gained attention for his massive muscle size and symmetry in the IFBB Elite Pro League. He decided to make a switch to the NPC league earlier this year in his hunt for the Olympia contest. His announcement added even more excitement as fans clamored to see Krizo line up against the competitors of the Men’s Open division.

He got off to a solid start at the 2022 Amateur Olympia Italy, where he took home the top prize to earn his IFBB Pro card. He followed up with another commanding performance at the 2022 EVLS Prague Pro just a few weeks after that to secure his qualification for the 2022 Mr. Olympia.

He received major backing from bodybuilding icons, including the four-time Sandow trophy winner Jay Cutler, who believes Michal Krizo could be in the first callout. Former Olympia champion Samir Bannout is confident Krizo would upset a lot of people in his debut appearance. Eight days out of the most prestigious fitness showcase, Krizo smashed a grueling back workout. The Slovakian mass monster shared the exercises he was using to get his back in shape while showing off his unreal build.

To fulfill his Olympia ambitions, Krizo must get past reigning two-time Mr. Olympia Mamdouh ‘Big Ramy’ Elssbiay. Big Ramy has proven to be a dominant champion who held on to the throne with his unparalleled size since his first win in 2019. With the addition of Michal Krizo to the lineup, Ramy suggested that this year’s edition will be the most exciting show of the last two decades.

At today’s 2022 Mr. Olympia press conference, Michal Krizo gave fans in attendance a final look at the package he will bring to the stage this weekend.

Krizo can be seen showing off his humongous arms muscle development while performing a front double bicep pose. Below are some more highlights from the presser.

Michal Krizo recently gave fans a sneak peek into his preparations for the upcoming 2022 Mr. Olympia. He showed off a stellar level of conditioning while boasting crazy vascularity just five days out from the show. The update came around the same time his rival Blessing Awodibu shared a physique update declaring it was time to peak for the Super Bowl of bodybuilding.

With the Olympia set to go down this weekend, fans will be excited to see Krizo stand next to the mass monsters on stage.