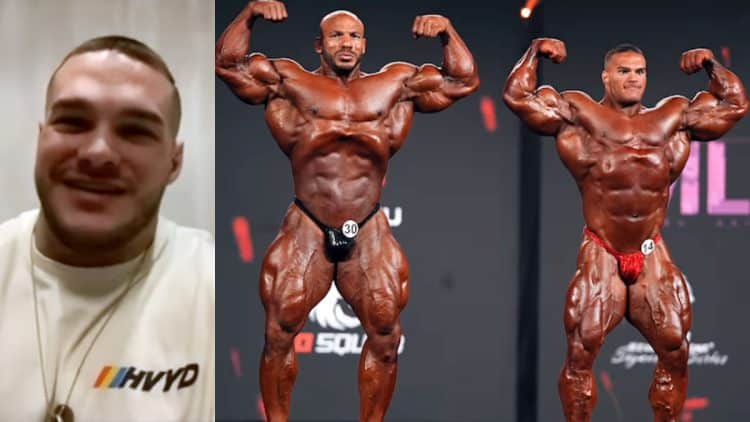 Bodybuilder Nick Walker turned in an incredible season last year. He will look to continue his successful run at the upcoming 2023 Arnold Classic, scheduled for Mar. 2-5 in Columbus, Ohio. In a recent video uploaded on YouTube, Walker shared his thoughts on the biggest challengers at the contest and addressed the varicose veins issue on his calves.

Nick Walker is arguably the most popular bodybuilder in the United States with over 1.2 million followers on Instagram. He rose to prominence as a Men’s Open competitor in 2020 when he turned heads at the IFBB Chicago Pro, placing fourth. He turned in one of the best rookie seasons the following year in 2021.

He kicked things off with a dominant showing at the New York Pro and handily won the show. Next, he scored back-to-back wins with another commanding performance at the Arnold Sports Festival, where he defeated Iain Valliere, Steve Kuclo, and other grizzled veterans to become the champion.

Walker solidified his place as one of the most elite contenders in the world with a fifth-place finish at the 2021 Mr. Olympia. Following the event, he got to work in the off-season and made significant progress in preparations for the next edition.

His efforts paid off at the 2022 Mr. Olympia. He presented a vastly improved package with a slimmer waistline and massive size that pronounced his v-taper even more. He managed to crack the top three for the first time in his career and improved his standing to the third spot behind runner-up Derek Lunsford and champion Hadi Choopan.

‘The Mutant’ got confirmed to step on the stage at the 35th edition of the annual Arnold Sports Festival about two weeks ago. He will face intense competition from two-time 212 Olympia king Shaun Clarida and former 212 Olympia victor Kamal Elgargni, both of whom will make a splash in the Open class.

Rising sensations Andrew Jacked and Samson Dauda are also on the roster. Former two-time Mr. Olympia winner Mamdouh ‘Big Ramy’ Elssbiay made a surprise entry into the lineup as well.

In a recent YouTube video, Nick Walker shared his goal for the upcoming 2023 Arnold Classic and opened up on his preparations for the show.

“The goal is to just keep thee waist tighter, bring it in tighter, get harder, get drier, get leaner, and present a better package than what we saw at the Olympia.”

He believes he is in an even better place for the contest than he was before the Olympia.

Earlier this week, Nick Walker gave fans a sneak peek into the package he will bring to the Arnold Classic. He showed off his insanely jacked physique just six weeks out from the competition. However, one of the biggest talking points was the difference in his calves from a previous update. There was speculation that Walker might have done something to address the varicose veins on his calves.

As it turns out, Walker put an end to the rumors by explaining that the issue was caused by deadlifts.

“No, what happened was I was deadlifting, and when I deadlift I rub against my shins and that’s really all that happened.”

‘The Mutant’ further shared his analysis of the competition at the Arnold Classic. According to Walker, ‘The Giant Killer’ and Dauda will present the toughest challenge. On the other hand, Walker believes that Big Ramy’s best days on stage are behind him.

“I’m going to go with either Shaun or Samson,” Walker continued. “I think (Ramy) is done at this point.”

Walker gave his take on the potential of Andrew Jacked and whether he can work his way up the rankings to become one of the top contenders.

“In my personal opinion, I think Andrew Jacked could easily beat everyone. But he has a lot of weak points still and he needs to improve that conditioning drastically in order for it to happen. So, until then, he’s going to sit where he sits.”

Nick Walker is determined to reclaim the throne at the 2023 Arnold Classic and become a two-time champion. Based on the current lineup, Walker enters the contest as the favorite to take home the top prize.