"Jujimufu" reflects on competing at his second-ever bodybuilding show: "I think my physique on stage might have shown some flattening" 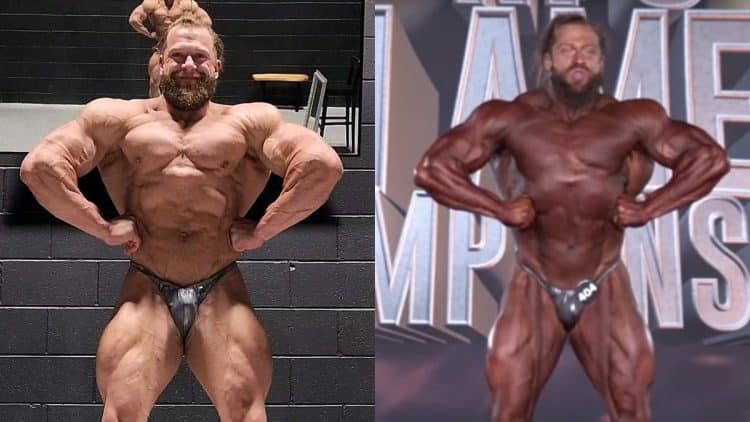 “Jujimufu,” one of YouTube’s most popular fitness stars, has decided to speak publicly about the physique he brought to his latest bodybuilding show. In a recent video, “Jujimufu” explained why he placed 11th and his physique looked ‘washed out’ at the 2022 NPC North American Championships and discussed some of the problems he encountered during prep week.

From amazing flexibility to jaw-dropping feats of strength, if there is one thing Jujimufu has mastered, it’s capturing an audience. He arose as a fitness influencer over the past several years. Since then, he’s grown his YouTube subscriber base to over 1.35 million. In addition to YouTube, the fitness influencer has amassed another 1.6 million followers on Instagram.

Back in 2020, Jujimufu gave fans the opportunity to vote and see if they would like to see him take part in a bodybuilding contest. With the help of bodybuilding legend Flex Wheeler, Jujimufu made it happen and competed at the 2021 NPC Worldwide Amateur Olympia Orlando, in the super heavyweight division where he finished fifth.

Nick’s Strength and Power YouTube channel mentioned that Jon’s chest looked “extremely off,” watery, and almost blurry at his latest contest. The channel also mentioned that Jujimufu’s outer sweep on his quads looked swollen. With many in the community wondering what went wrong with his physique, Jujimufu decided to give some answers.

In a recent YouTube video, Jujimufu said he bombed his latest bodybuilding competition and had a ‘washed out physique.’

“I wanted to make a video about my bodybuilding competition. This is my second competition that I’ve ever done. I bombed,” Jujimufu said. “I had a washed out physique.”

“I placed third in the Masters 35+ Open Superheavyweight division. So, this is a national level show. I’ve been trianing bodybuilding for about three years now with actual exercises. I hadn’t even done a leg extension or a leg curl in my life until about three years ago. I want to do the competitions because I want to experience what these athletes have to go through.”

“When you get down to that last week [of prep], it’s a very difficult game of chest. I still really don’t know what happened. I think I looked good. Honestly, I love the way I looked. I have a more powerful physique than I did last year. I have more muscle. I was able to add more muscle in my legs. I’m stronger.

But this prep was a lot harder — this was the hardest thing I’ve ever done physically. Maybe the results don’t show for it, but good God. It was so hard for me. It took a toll on me. It took a lot of my life away from me.”

While he liked the way his physique looked, Jon admitted that it was ‘flat’ on stage. He added that he ran into a few problems during prep week.

“After a while I felt like I was starving. I couldn’t sleep anymore. I think my physique on stage might have shown some flattening. That wasn’t spilling over. That was flattening out. Another thing that could of happened: I didn’t back off on my leg training soon enough.”

“My legs could have been inflamed. I saw this during prep, at some check-ins, my legs looked a little puffier. If you guys have ever done a leg workout — they look bigger but then there’s no definition on them. That’s why you don’t get a leg pump backstage. But still, if you do a leg workout too soon to competition, it could smooth out some of the details.”

Despite stumbling on stage, Jujimufu made it clear that he’s not injured nor is he using any site enhancement oils, like Synthol.

He added that an allergic reaction could be a possible culprit that affected his physique, especially his legs.

“The chest, I don’t know why it looked washed out. But it was kind of here [points to chest], my legs — I had a hard time getting the sweep on the outside. It could have been an allergic reaction. It could have been flattening. I actually don’t really know what happened.”

In addition to bodybuilding, Jujimufu has developed a reputation for his strength. Back in February, he garnered headlines with a massive 701-pound squat personal record (PR). He’s constantly thinking of new ways to captivate his audience, like the time he deadlifted 540 pounds for three reps while performing backflips.

After clearing the air, and dismissing injury concerns, perhaps fans will see Jujimufu back on a bodybuilding stage sometime soon. While he admits his physique was ‘washed out,’ Jujimufu is unsure what exactly caused his body to respond that way.

Why Your Calves Are Skinny and How to Fix Them