Hassan Mostafa and a number of bodybuilders won gold at the 2022 Puerto Rico Pro, earning their invitations to compete at Olympia later this year. 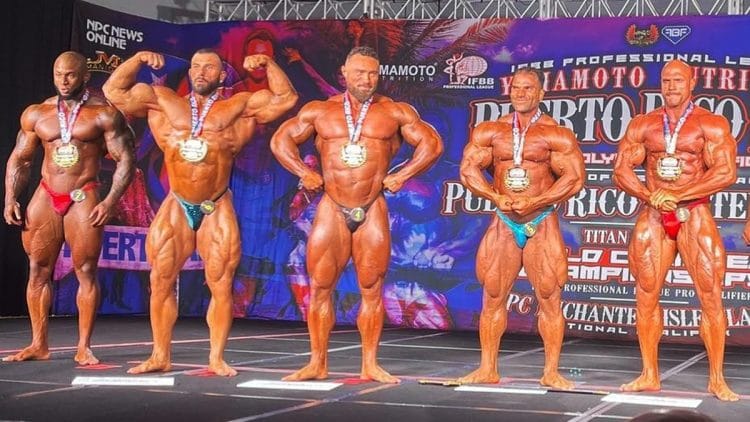 The 2022 season of bodybuilding is underway with athletes gathering from around the world, presenting their physiques, in hopes to secure a coveted invitation to Mr. Olympia this winter. 2022 Olympia will take place from Dec. 16th – 18th in Las Vegas, NV. Find a list of all winning athletes below:

Egypt’s Hassan Mostafa made waves last year but struggled to win a major title. He competed at the 2021 Puerto Rico and earned third place. Next, he scored a sixth place showing at the 2021 Chicago Pro and fifth at the Texas Pro in the same calendar year. Following those shows, Hassan entered bodybuilding’s two most prestigious events eager to make a statement.

At the 2021 Arnold Classic, an extremely competitive show, Hassan took ninth place. He finally made his way to 2021 Olympia, where he found himself outside the top-ten in 13th place. Throughout his prep, Hassan teased fans by showing off some improvements, and they were full display this weekend.

Another top Men’s Open bodybuilder garnering pre-contest hype was Theo Leguerrier. Leguerrier, widely regarded for his well-developed lower body, kept busy during his season last year. Theo participated at a handful of IFBB Pro League shows. Some of his more notable performances came when he placed sixth at the 2021 Europa Pro Championships and when reached the podium in third place at the Arnold Classic United Kingdom just a few months later.

Before capping off last year, Leguerrier earned fifth place at the 2021 Yamamoto Cup Pro. Theo presented a new look to the 2022 New York Pro last month and landed in fourth. In addition, Leguerrier also nabbed second place honors at the recent 2022 Toronto Pro Supershow. After nearly reaching the podium, Theo brought his best package to date to the 2022 Puerto Rico pro. By the end of the contest, Hassan Mostafa won gold, earning his invitation to Olympia later this year.

Heading into the event, Bo Lewis was a standout to win the show, especially given his quick rise to the top of the 212 division. He picked up arguably the most significant win of his career at the 2020 New York Pro. Following his success, he attempted 2020 Mr. Olympia, a show that saw the consistent bodybuilder take ninth place respectively. Lewis competed at the 2021 Tampa Pro in his last event, placing third.

Many fans also had a close eye on Oswaldo Gonzalez. Gonzalez garnered a lot of attention in the 212 division last year. He kicked off his season with a seventh place showing at the 2021 New York Pro. Gonzalez proved his conditioning could hang with high level talent and took fifth place at the 2021 Chicago Pro. Next, Oswaldo placed ninth at the Tampa Pro roughly a month after. By the end of the night, Oswaldo Gonzalez took first place, earning his invitation to 2022 Olympia.

Carlos Dommar entered this weekend with momentum. Dommar stood out last year after earning fifth place at the 2021 Tampa Pro. He’s already shown off a lot of progress this May after storming the stage at the 2022 Optimum Classic Pro, where he earned first place.

Another bodybuilder that fans circled as an obvious favorite was Emanuele Ricotti. He stood out from prejudging and made his stage routine look effortless. In the end, Emanuele Ricotti‘s aesthetic build overwhelmed his competitors, winning first place and punching his ticket to 2022 Olympia.

Clarence McSpadden had a busy schedule last year. He began the season with at the 2021 New York Pro in fifth place. Competing at a total of eight IFBB Pro events, McSpadden made the most of his time training in the off-season. Some of his more notable performances include his bronze trophy at the Pro Miami Muscle Beach. After two mores shows, McSpadden finally nailed first place at the 2021 Lenda Murray Norfolk Pro.

Next, McSpadden took his conditioned build to 2021 Mr. Olympia, ultimately securing 16th place. Despite the unsatisfying result, he gave the Hurricane Pro a shot in the same calendar year, though found himself outside the podium in eighth place.

Anthony Gilkes also led an active bodybuilding schedule last year. Gilkes placed sixth at the 2021 DC Pro and in sixth once again at the Puerto Rico Pro in 2021. Gilkes would finish his season with a 13th place performance at the 2021 Chicago Pro and a 12th place showing at the Texas Pro. While Gilkes brought an extremely conditioned package, Clarence McSpadden couldn’t be denied and walked away in first, punching his ticket to 2022 Olympia.

Julia Föry had a chip on her shoulder after her last performance came razor close to reaching the podium, when she secured fourth place at the 2021 Tampa Pro. She was tasked with going to battle on stage against Reshanna Boswell, who has already put in a busy 2021 season.

Boswell kicked off last year in style — winning the title at the 2021 Lenda Murray Savannah Pro. That same year, Boswell also brought her talents to the Rising Phoenix Arizona Pro, a showing that saw her earn 10th place. Before calling it a year, the Women’s Bodybuilding competitor entered 2021 Olympia, and found herself in 15th place. Knowing she had to make improvements, Boswell didn’t fold under the pressure. In a hard-fought contest, Reshanna Boswell walked away with gold over the weekend in Puerto Rico, earning her invite to 2022 Olympia.

Figure standout Sam Jerring was a name to watch out for heading into the event. She brings a commanding stage presence every time she makes an appearance, and this weekend was no different.

Prejudging also highlighted the conditioned physique of Melissa Brodsky. Brodsky arguably brought her best package to date over the weekend. but Sam Jerring proved to be too much, and she earned her 2022 Olympia invite as a result.

Bikini competitor Francesca Stoico was an athlete to watch heading into the contest. She competed at a staggering nine IFBB Pro League shows last year. During that incredible run, she earned two victories, first at the 2021 Puerto Vallarta Pro and then again at Phoenix Arizona Pro.

Meanwhile, Gabriella Mohamed also had some momentum heading into the Puerto Rico Pro. After a close battle with Stoico, Gabriella Mohamed presented one of the best packages of her career, earning first place and her Olympia invitation.

In Claudia’s way is Ann Gruber, an active IFBB Pro eager to punch her ticket to 2022 Olympia. She had an impressive season last year, which saw her compete at this event in 2021, where she earned fifth place at the Puerto Rico Pro. Remaining busy, she proceeded to the 2021 Atlantic Coast Pro, earning eighth place. On the same day, she placed second at the Atlantic Coast Pro in the Masters Over 40 category. After a heated contest, Claudia Gabriela de León Pardo won the show and earned her qualification to compete at 2022 Olympia.

Bodybuilder Jasmine Payne is always a threat anytime she makes her way to a Pro stage. She’s already competed at three IFBB Pro League shows this year, starting with a fourth place performance at the highly competitive 2022 Pittsburgh Pro. She landed third place at the 2022 New York Pro recently. Before coming to this show, she also placed second at the Clash of the Titanz Pro.

Gisele Machado has shown that she can contend with the best during her career. She offers an extremely balanced physique and is known as one of the most conditioned athletes in the division. Machado has been flawless thus far as an IFBB Pro League bodybuilder. She earned gold at the 2021 Monterrey Pro and once again stole the show earlier this month, earning the Wellness title at the 2022 Miami Muscle Beach Pro show. In the end, Gisele Machado walked away victorious and earned her invite to compete on the Olympia stage at the end of the year. 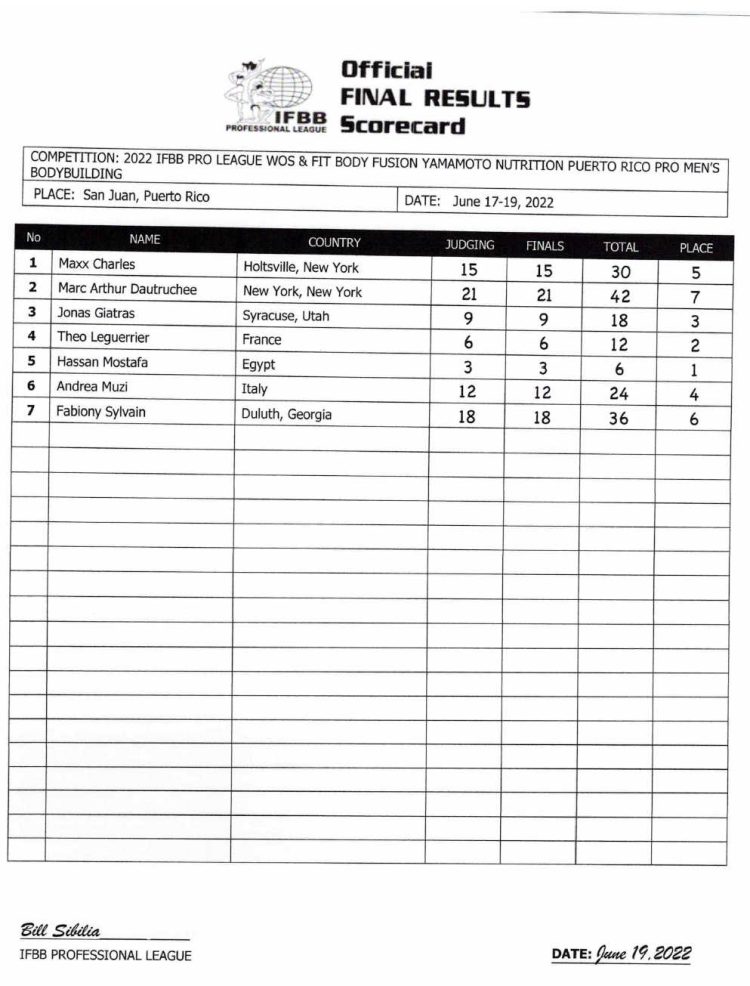 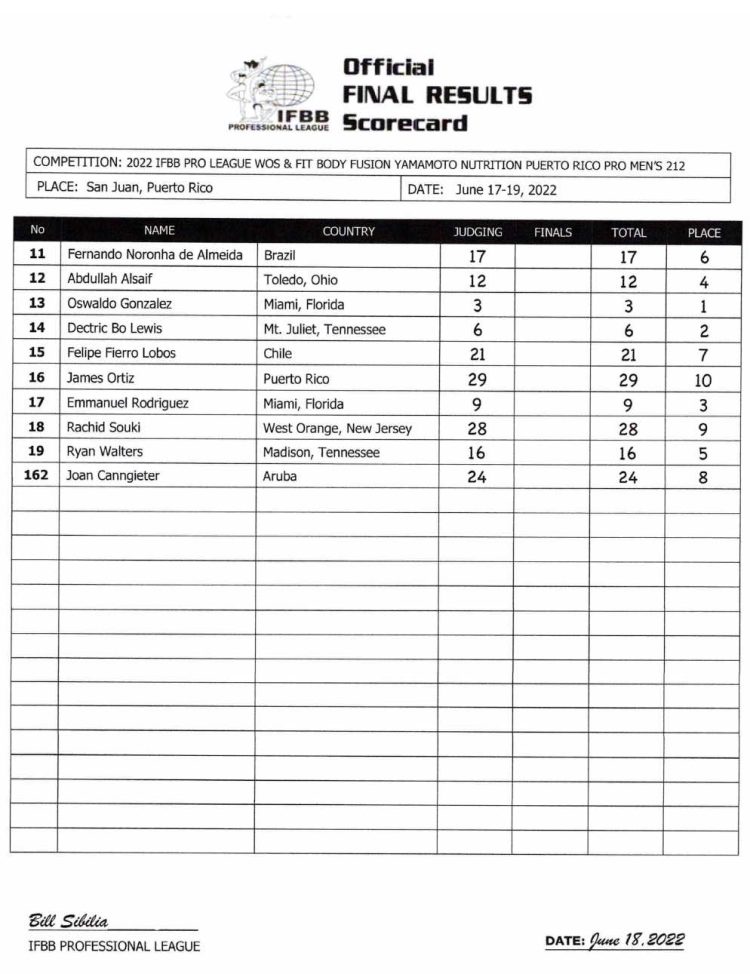 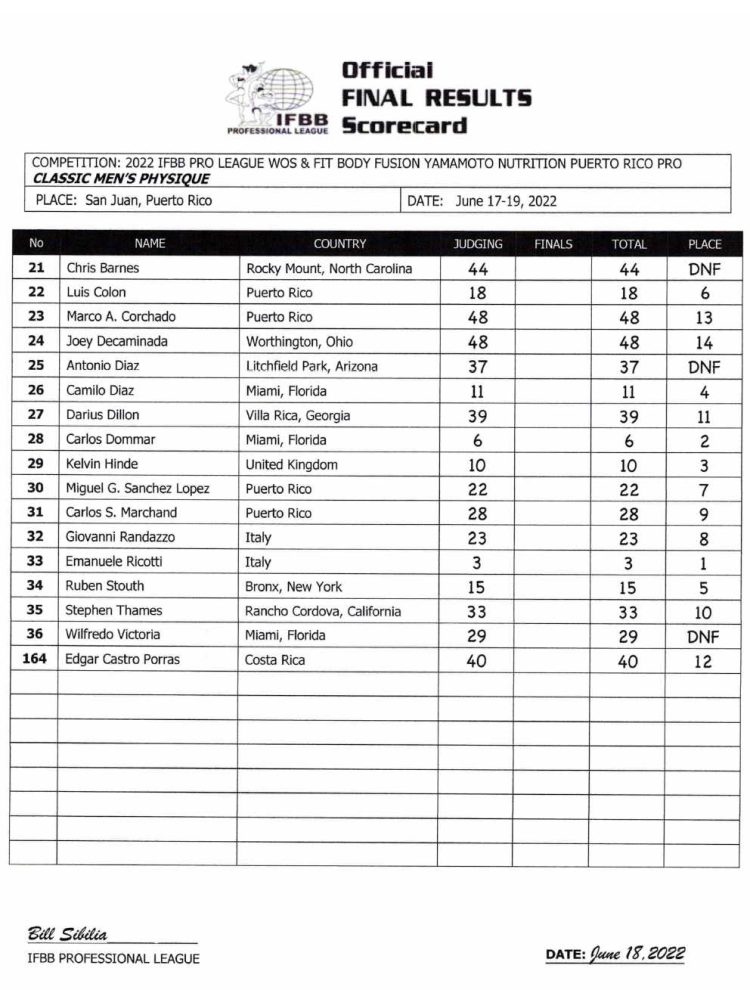 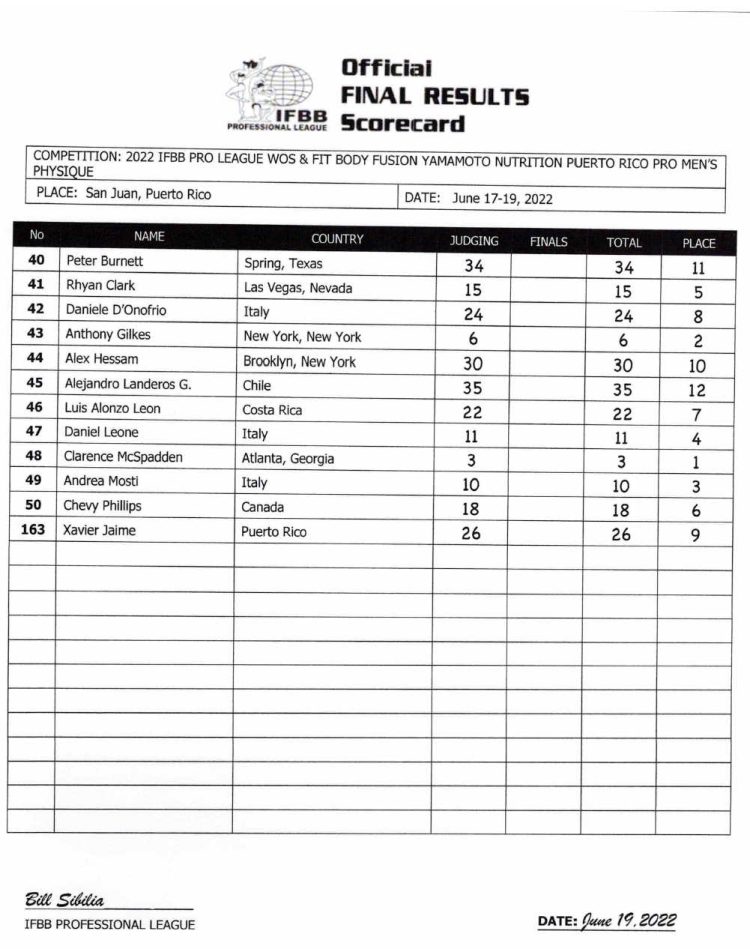 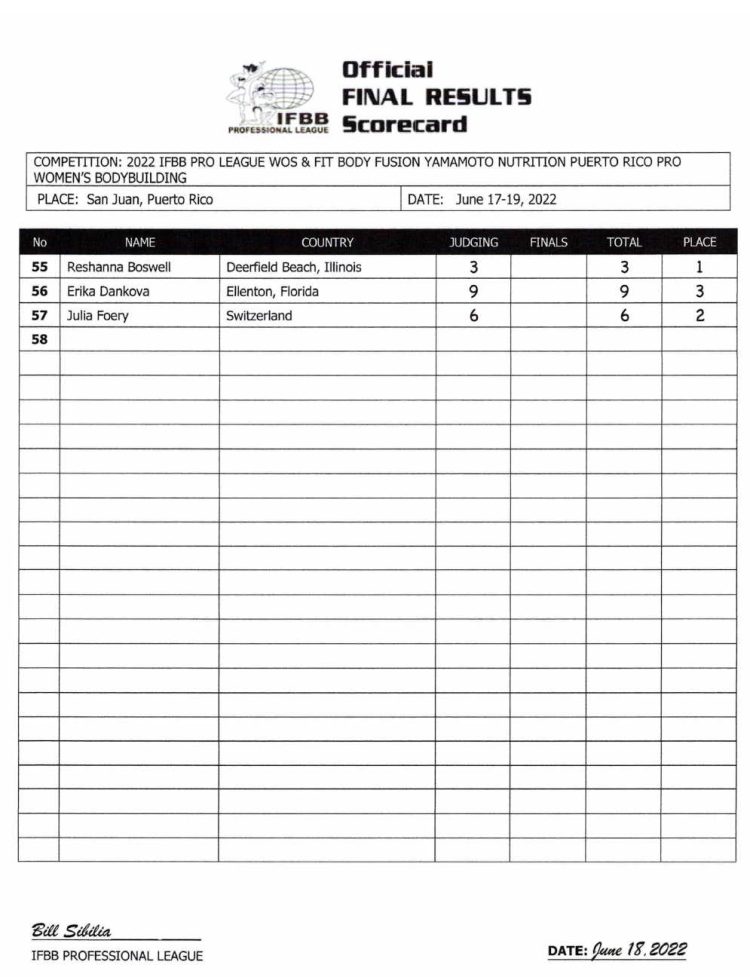 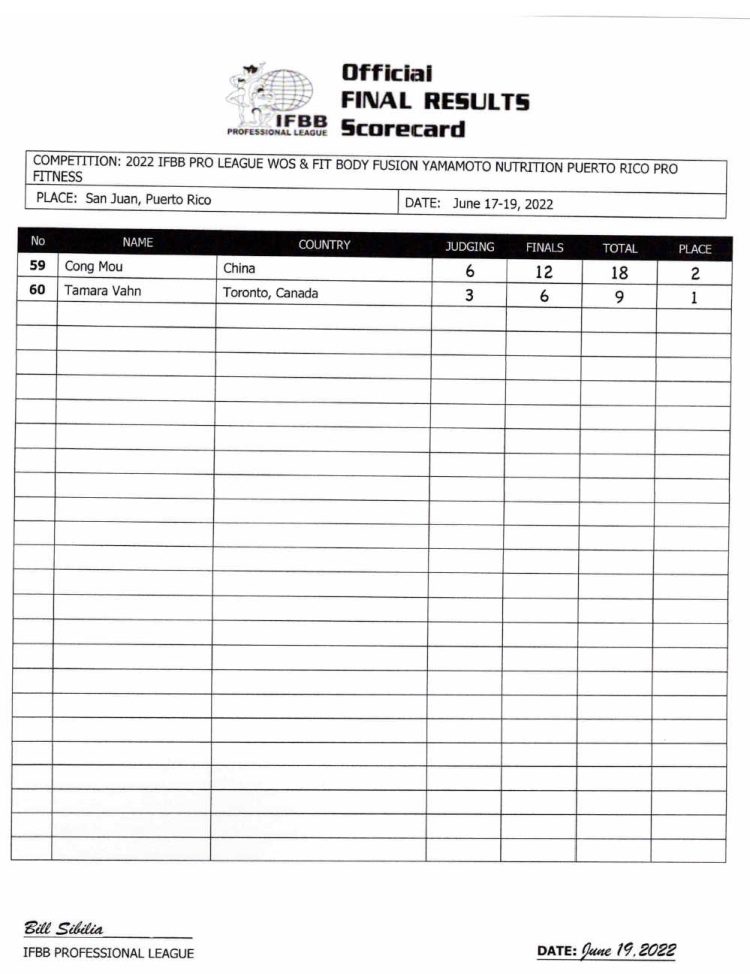 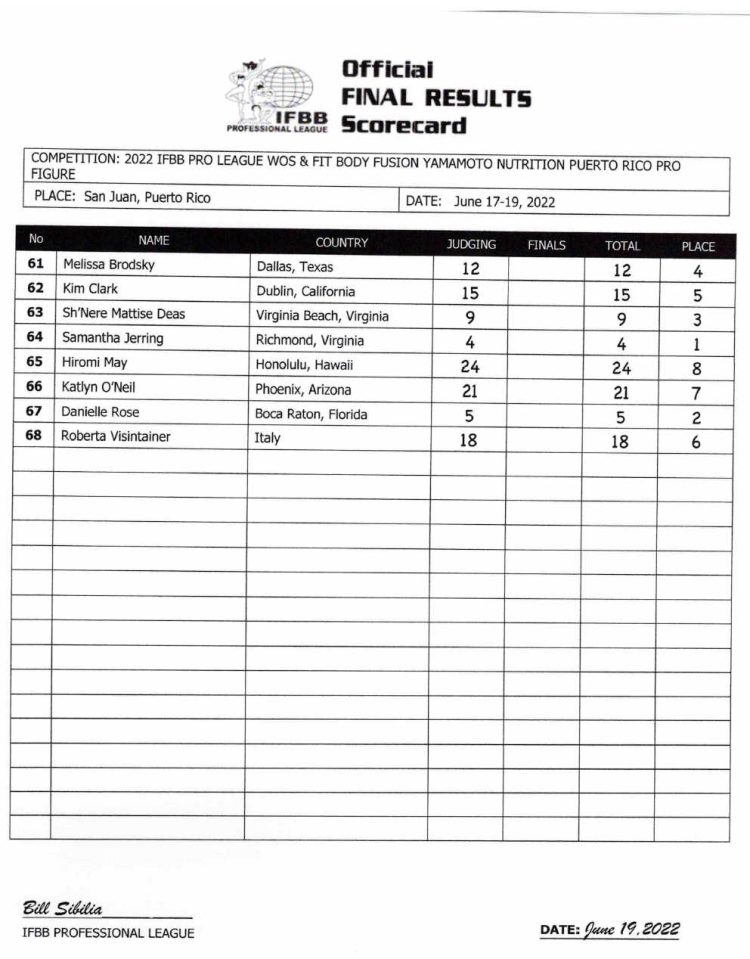 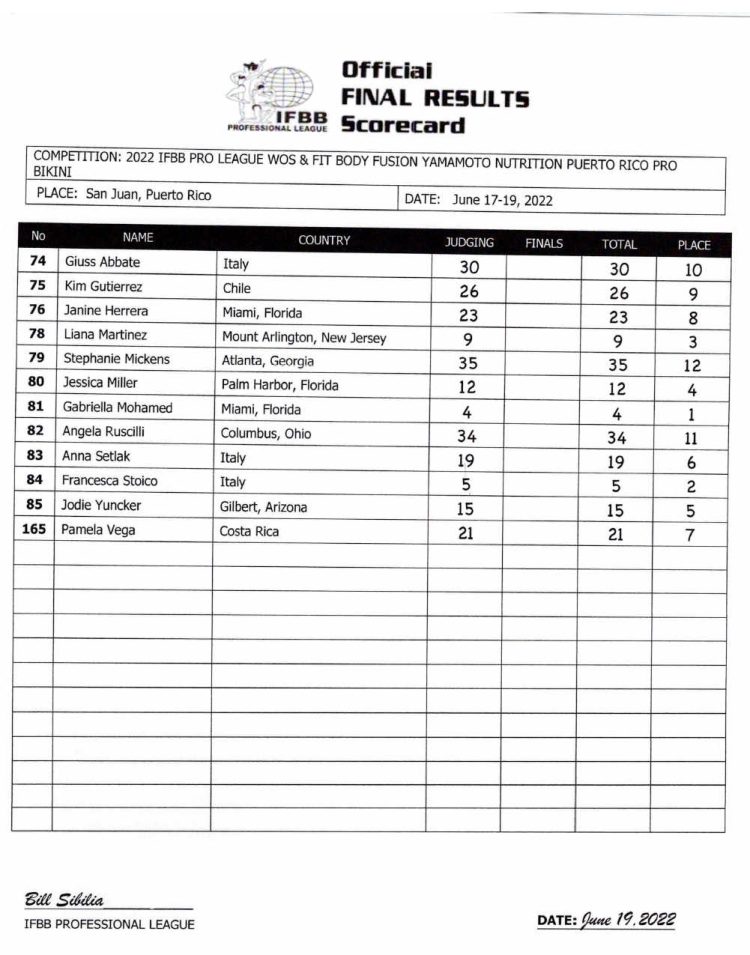 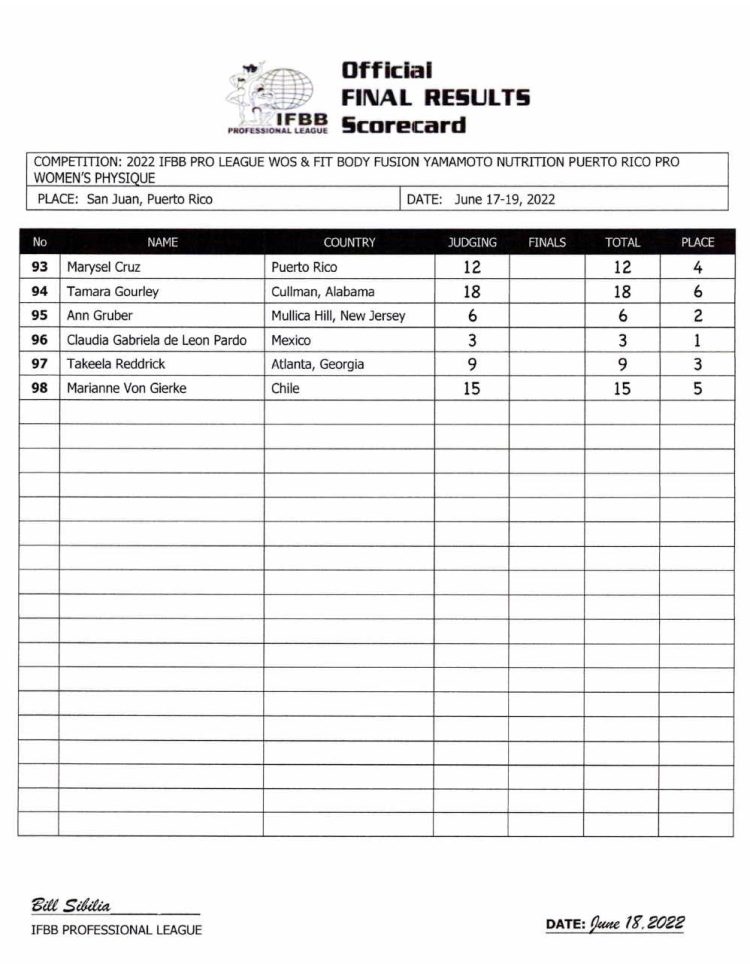 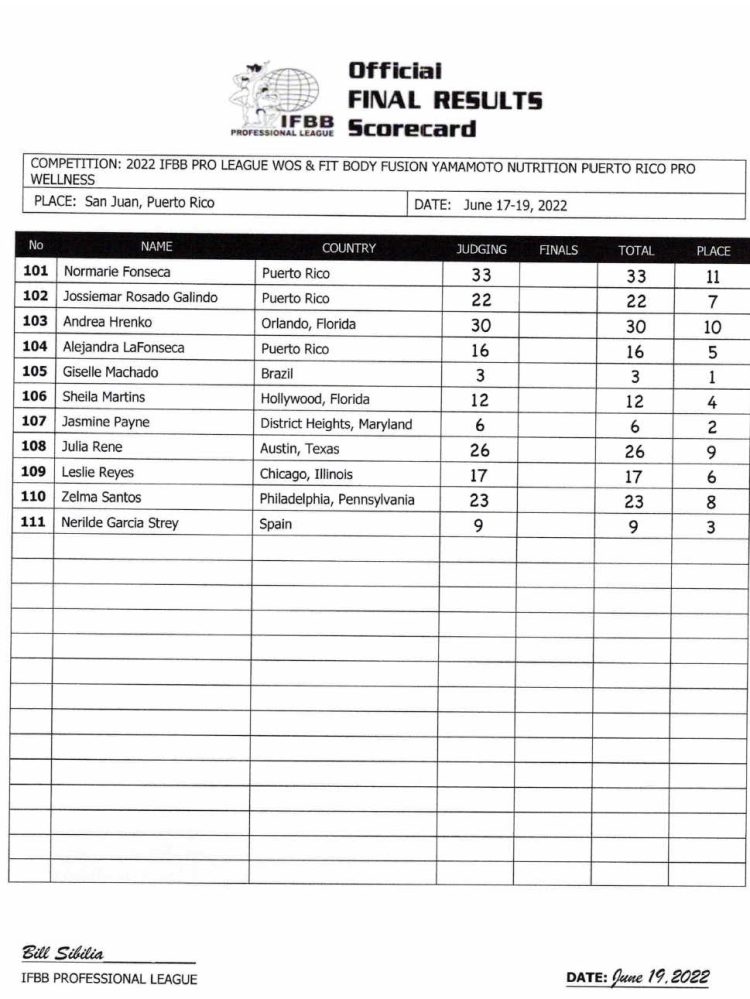 Anticipation for the biggest show of the year continues to build. Fitness Volt would like to congratulate all of the winners on their major victories at the 2022 Puerto Rico Pro!