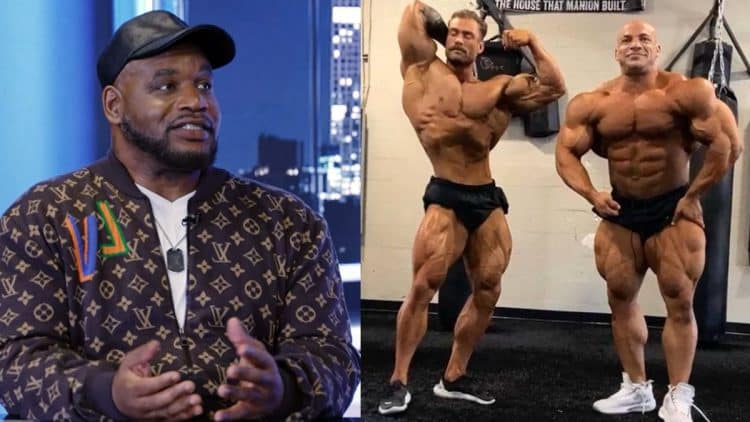 Chris Cormier on Chris Bumstead (Image via Muscle and Fitness/YouTube)

Canadian bodybuilder Chris Bumstead stands out as one of the most popular athletes in the IFBB Pro League Classic Physique division. He previously expressed a desire to change divisions and compete in Men’s Open bodybuilding. In a video posted to YouTube, Judge Terrick El Guindy and former professional bodybuilder Chris Cormier shared their analysis of Bumstead’s chances in the Open division.

Cbum first made headlines for edging out two-time Classic Physique Olympia winner Breon Ansley to win his first Olympia in 2019. He continued to dominate his competition in the following two editions of the shows and took home the top prize in both 2020 and 2021 with a dominant performance.

The reigning three-time Classic Physique Olympia champ indicated plans to move into the Men’s Open division, which hosts some of the freakiest mass monsters in the world. Bumstead was aware of the work it would require to challenge the top contenders in the Open division but did not completely rule out the idea. He hinted at possibly making a ‘one-off’ appearance in the division before retirement.

Last month, ‘Cbum’ admitted that the move could be “too difficult, too big, too freaky,” and risky for him. He was concerned about the toll it would take on his body to keep up with the likes of Mamdouh ‘Big Ramy’ Elssbiay, Brandon Curry, Hunter Labrada, and others. He believes the Classic Physique is more like an art form whereas Open bodybuilding focuses on muscle mass and size.

In a recent video uploaded on Muscle and Fitness’ YouTube channel, Terrick El Guindy and bodybuilding veteran Chris Cormier shared their thoughts on the possibility of Chris Bumstead moving to the Men’s Open division.

El Guindy started by recalling Cbum’s journey as a professional competitor and his glittering resume as a Classic athlete.

“Let’s look back at his history as a bodybuilder. Chris Bumstead turned Pro at the North Americans as a bodybuilder heavyweight. On that day, he lost to Justin Rodriguez, who was the super heavy and outmuscled him by a lot. Once the Classic division started, Chris jumped right in and has been extremely successful. As I’ve said before, I think Chris should stay in the Classic Physique. He’s dominant, relevant, and a superstar in the Classic Physique.”

According to the Guindy, Bumstead may be more aesthetically pleasing but he lacks the size to compete in Men’s Open division.

“If the question is how he would do in the open, he would be outmassed by most. Nobody would deny that. He has very nice lines but now you’re dealing with guys that also have nice lines and are bigger than him which is Brandon Curry. He’d be clearly outmassed by Big Ramy. In terms of conditioning, which is one of his strengths, now he’s dealing against Hady. Hunter Labrada is kind of a hybrid, he would expose him on size and shape because Hunter is really good; Bumstead could be more conditioned.

“Nick Walker would outmass him but Chris would be a little bit more aesthetically pleasing. I think he would end up, at his best, Reagan Grimes or Rafael Brandao, those guys probably in the second callout. If they came in top shape, that’s where Chris would end up. It would require him to gain a lot of mass to be on the first call out.”

Cormier would like to see Bumstead in the Open

While Cormier does not believe Bumstead would be able to win the Olympia in the Open, he backed Chris to do well if he decided to make the move.

“He might do okay. I don’t think he’s going to win the Olympia in the Open. He gets up to 260-265 pounds in the off-season so if he gets down, if he loses 30 pounds, that’s still a substantial physique and a competitor at that bodyweight.

Chris Bumstead is gearing up to defend his title at the upcoming 2022 Mr. Olympia, scheduled for Dec. 15-18 at Planet Hollywood Resort & Casino in Las Vegas, Nevada. He recently smashed his quads and hamstrings through a ‘brutal’ leg workout in preparation for the show.

Last week, Bumstead made it clear that he’s leaving no stone unturned in his quest to win a fourth Classic title with a heavy leg workout. Although the Open category could be too much for him in terms of size, Bumstead is confident he can extend his winning run in the Classic division.

Canadian bodybuilder Chris Bumstead is the most dominant and popular Classic Physique athlete in the IFBB. In a recent post...

The hard work Chris Bumstead is putting into the gym will allow him to maintain a lead over his competition...