'The Texas Oak' is putting the work in to challenge top Classic Physique competitors at the 2022 Olympia. 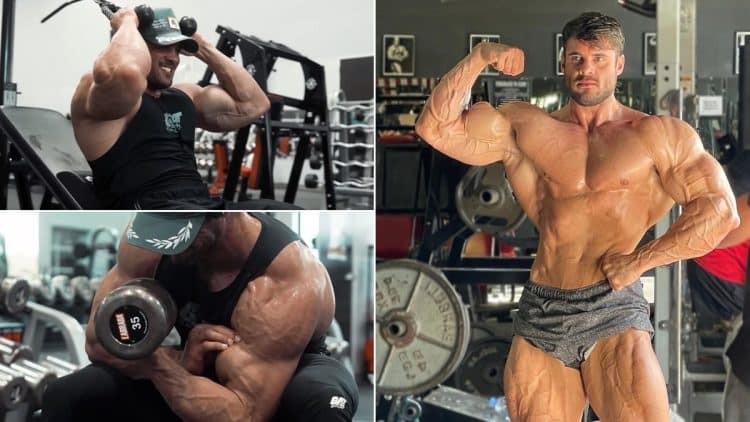 Logan Franklin is increasing his training intensity as the 2022 Olympia is getting closer. Franklin is an American professional bodybuilder and an army veteran competing in the IFBB Pro League Classic Physique division. The Texas Oak served in Afghanistan and South Korea during his time in the military. He eventually applied military discipline and work ethic to become a professional bodybuilder. Winning the 2020 New York Pro Classic Physique title is by far the biggest achievement of Franklin’s bodybuilding career. Apart from this, he has the 2021 Shawn Ray Hawaiian Classic and the 2018 Tampa Pro (Men’s Physique) wins to his name. Franklin is a four-time Olympia competitor and came close to cracking the top five at the 2017 Olympia, finishing seventh in the Classic Physique division.

The 2021 Shawn Ray Hawaiian Classic win earned Franklin a direct qualification to the 2022 Olympia. He is training to challenge the top Classic Physique competitors when the Superbowl of bodybuilding returns to its home in Las Vegas, NV on Dec. 15. Recently, he went through a punishing arms workout as a part of his competition prep. The video of this session was uploaded on Franklin’s YouTube channel. So without further delay, let’s jump right into the detailed account of this training session.

Franklin started the arms workout with this triceps movement. Elbow is the most crucial joint for arm movement; warming it up at the beginning of every arm workout is extremely necessary.

“This will warm up the elbows nice, and good and we’ll go from there…” Franklin said.

Franklin performed a few sets of this exercise and took to the next movement after getting the blood flowing into his arms.

This is one of the, if not ‘the’ best triceps exercise according to many bodybuilders as it allows full elbow flexion without losing the stability in the shoulder joint. While speaking about his form and position for this movement, Franklin said:

“My triceps are warm. I’m actually gonna go single. Elbow will be slightly behind my waistline. And then just working on getting that peak contraction behind the body.”

The Texas Oak stated that he was trying to make the reps as hard as possible by focusing on the execution and not merely going through the movement.

“Basically trying to do a two-second squeeze, three-second negative, one-second stretch – hold it in the stretch and then three seconds back into the squeeze. So nine seconds per rep! That’s what I am trying to do every time and squeeze the f*** out of it!” Franklin said.

He got a few solid sets of this exercise under his belt and moved on to the next one.

The army veteran stated that his goal with this exercise was to keep his triceps in the stretched position since the previous exercise focused on the peak contraction.

Franklin positioned himself so that he was at an angle with the machine rather than having his back parallel to it. This helped him get the perfect wrist alignment and hit the triceps more effectively.

After performing a few sets of this movement unilaterally, Franklin did this exercise with both hands using a rope attachment and moved on to the next exercise. However, he admitted that his elbows did not feel comfortable when he went heavier.

Franklin shifted his focus on working his biceps and started with dumbbell incline curls. The 31-year-old revealed that he experiences discomfort in his left forearm right below the elbow when he curls. While he tried to get the issue fixed with medical help, Franklin could not afford to give rest to the arm as he had to start the competition prep.

“It’s nagging pain… I don’t necessarily know if it’s sharp or anything. It’s just overwhelming compared to feeling the squeeze in my biceps,” Franklin said.

Franklin returned to working the triceps next and performed a variation of one-arm triceps pushdown. To work the shorter head of the triceps, Franklin kept the elbow to the side and pushed down the fat handle attachment with a prorated grip.

“I am trying to feel the elbow bend. I think the biggest key is I am pushing down my shoulder and I am compressing and keeping it locked in,” Franklin said.

Franklin performed all the sets of this exercise with slow and controlled motion and returned to working the biceps.

The Texas Oak next took to arguably the best isolation movement for biceps. The triceps are firmly pressed against the pad while performing the preacher curls and therefore can’t take over the movement. This results in greater biceps isolation.

The 31-year-old performed a few sets of this exercise unilaterally as well as with both arms and jumped into the next biceps movement.

The concentration curl activates both the long and short head of the biceps brachii muscles and helps build size and definition. Franklin performed a few sets of this exercise.

Hammer curls work the brachialis and the brachioradialis muscles along with the biceps brachii. Franklin did a few sets of this exercise and went back to working the triceps with the next movement.

This movement served as the finisher of Franklin’s arms workout. Following this, Franklin performed incline cable crunches to cap the training session.

The Olympia Classic Physique division has become a center of attention for many bodybuilding fans due to the presence of elite competitors like reigning champion Chris Bumstead, Breon Ansley, Urs Kalecinski, and Ramon Rocha Querioz. Franklin is a high-caliber competitor that has the work ethic and the drive to bring a complete package to the Olympia stage in December. If he continues to make improvements, he can very well insert his name in the top five at the 2022 Olympia.