In his quest to win a fourth Classic Physique Olympia title, Bumstead continues to train intensively. 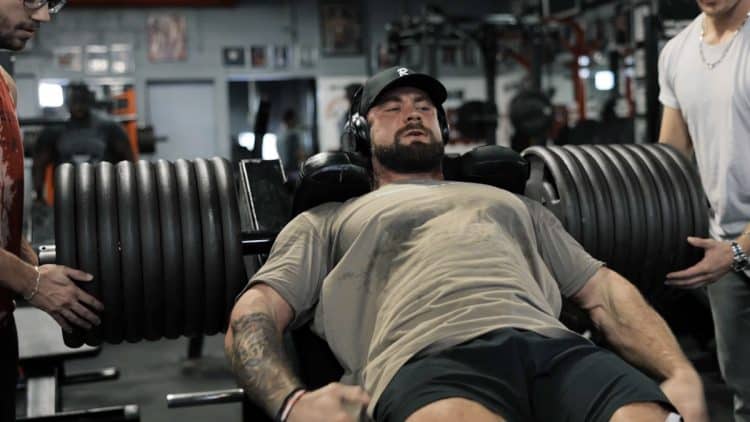 Chris Bumstead is arguably the most accomplished and most famous active professional bodybuilder in the world. He won the Classic Physique Olympia title by dethroning the former champion Breon Ansley at the 2019 Olympia. He then went on to further his legacy by defending the top spot at the 2020 and 2021 Olympia. The Canadian Native will attempt to win his fourth consecutive title at the 2022 Olympia that will take place from Dec. 15-18 in Las Vegas, NV. Bumstead acknowledges the challenges posed by up-and-coming talents in the division and he is pushing himself in the gym to stay ahead of the rest of the division.

It is important to Bumstead to improve his overall package, and he is particularly interested in improving his bigger legs ahead of Olympia this December.

Bumstead began preparing for the 2022 Olympia in August and is aiming at his fourth Olympia Classic Physique title. As part of his preparation for the competition, he recently completed an intense workout at the Bev Francis Gym. Without further ado, let’s examine the detailed account of this session.

Chris Bumstead started the leg workout with these movements to sufficiently warm his lower body muscles before jumping into heavier exercises. Leg extensions and leg curls work the quads and hamstrings, respectively and also warm up the knee joint which is crucial in almost all the lower body movements. Hip adduction machine works the adductor muscles that are on the inner side of the thigh. Bumstead performed a few sets of these exercises with moderate weights to increase the blood flow in them.

The Canadian native performed this as the first compound movement of the day. Since the back is pressed against the pad during this movement, it alleviates the stress on the spine and allows to lift heavier loads to work the lower body muscles.

CBum performed the warm-up sets of hack squats with no plates to get a hang of the movement and did the working sets with incrementally heavier loads. For the top set, Bumstead went extremely heavy and loaded nine plates on each side to crank out nine reps. The 27-year-old performed a back-off set with seven plates next and moved on to the leg press machine.

Bumstead next took to the leg press to work the lower body further. Performing the exercise unilaterally helps focus a lot more on the movement to refine the technique. Bumstead performed a few heavy wets of unilateral leg press and took to the next exercise.

Bumstead went back to this isolation movement next to focus more on quads. Leg extensions are one of the most basic and effective movements to develop the quads. However, they can be harsh on the knees if done in excess or too heavy weights. Bumstead performed a few sets of this movement and took to the Romanian deadlifts next.

The Romanian deadlift is an excellent posterior chain movement that primarily targets the glutes and hamstrings. However, it also activates the erector spinae and calves as well. Since this exercise is performed with slight knee flexion, it is not easy to lift as heavy weights as a standard deadlift with this movement. Nevertheless, it is an extremely helpful exercise to gain strength and size.

Bumstead did all the sets of this movement with two plates on each side and shifted his focus on the quads with the next exercise.

This movement served as the final quad movement in Bumstead’s legs routine. From a bodybuilding perspective, sissy squats are an isolation movement. In this exercise, the quads work exponentially more to lift the whole body weight by extending the knees. Hamstrings and glutes take a supporting role in this movement. Sissy squats can also reduce the chances of knee injury by strengthening the connective tissue and muscles around the knee.

Bumstead performed a few good sets of this movement on the machine and took to the finisher of the day.

The Olympia Classic Physique champion wrapped up the training session with this isolation movement to work the hamstrings. He performed a few sets of seated leg curls and left for home with ‘beat up’ legs.

Chris Bumstead has retained his top spot in the Classic Physique division so far by staying ahead of the curve. The Canadian Native is a favorite heading into the 2022 Olympia for the same reason. However, the division is home to some of the most elite bodybuilders of this era. While the former champ Breon Ansley is still in the mix, young talent like the 2022 Arnold Classic Physique winner Terrence Ruffin, Ramon Rocha Queiroz, and Urs Kalecinski are getting better with each passing day.

His leg workout, which involves high repetitions and intensity, will definitely result in the development of his lower body. Therefore, we will be able to see more progress updates from Bumstead as the event approaches.