The 7x Mr. Olympia, Phil Heath, will not compete this time, but will still have an important role. 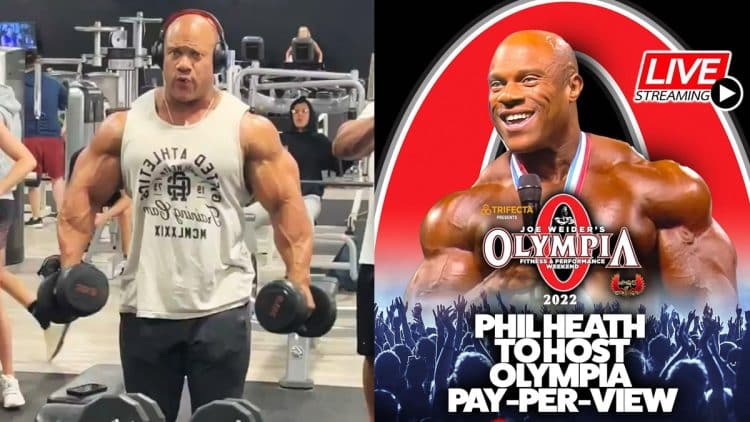 Despite being only one win short of equaling Ronnie Coleman and Lee Haney as bodybuilders with the most Mr. Olympia wins (eight titles each), Phil Heath will miss out on attempting to do so this year. The 2022 Mr. Olympia contest will take place from Dec. 16 to 18 in Las Vegas, NV, and Phil will not be one of the competitors. However, Phil announced through Instagram that he will commentate the show. In this way, fans will be able to hear one of the most knowledgeable bodybuilders ever give his thoughts on the subject.

In addition to being a seven-time Mr. Olympia, Phil Heath is known for possessing one of the most impressive physiques ever exhibited. In his new role, Phil will be able to make use of his experience and attention to detail to the fullest extent possible. The 2022 Mr. Olympia will even be more exciting with Phil’s commentary, as no one could possibly understand the show better than Phil.

“Commentating at this year’s event provides me an opportunity to express my love and support to its athletes who definitely sacrifice a ton to be on this historic stage.

To the fans I love you all and please know that I will do my absolute best in the booth, illustrating the body of work these amazing athletes showcase!”

Immediately after completing his training session, Phil Heath announced he would be taking on a new role at the 2022 Mr. Olympia. Despite wearing a tank top, his physique looked amazing. He looks close to stage-ready, but it is unclear if he will compete professionally again.

Aside from Heath’s announcement on Instagram, Mr. Olympia has also announced that ‘The Gift’ will host the Olympia this December.

One of the greatest bodybuilders of all-time will be taking his talents to the broadcast booth this December.  Phil Heath, a 7-time Mr. Olympia champion, will serve as a lead commentator for Joe Weider’s Olympia Fitness & Performance Weekend, widely regarded as the “Super Bowl” of the fitness industry.

The #1 bodybuilder on the planet from 2011-2017 will provide opinion and analysis for the worldwide event coverage on December 16-17 LIVE from The Planet Hollywood in Las Vegas.

“The Olympia has meant so much to me and my legacy.” Explains Heath. “I’m always looking for new ways to connect with fans and I’m grateful to Jake Wood, Dan Solomon and the entire Olympia team for this opportunity.  This year’s Olympia is loaded with incredible storylines and rivalries. Looking forward to seeing everyone in Vegas.”

In recent years, Heath has focused on various business initiatives, as well as motivational speaking, while working closely with selected global brands, including his current role as a spokesman for @transcendhrt, a leading provider of health and performance optimization.

Phil has never officially retired, but in 2021 he did not compete at all. He recently explained that the chances of his return are 5%. On the other hand, the 4x Mr. Olympia, Jay Cutler, thinks that Phil Heath is done with competing.

Phil Heath has accomplished a lot throughout his career, so it would also be understandable if he is satisfied and does not want to compete anymore. His muscle insertions were always incredible, which is why he got the nickname “The Gift”. Phil also maximized his genetic potential with insane training and diet plans. He ultimately won an incredible number of bodybuilding shows.

Phil Heath earned his IFBB Pro card at the 2005 NPC USA Championships, which set him up for a life of success. Upon trying out in the 2008 Mr. Olympia, Phil Heath finished in a surprising third place, and another podium finish two years later. However, Phil’s greatest breakthrough turned out to be in 2011, as he won the Mr. Olympia for the first time. He became absolutely unbeatable after that and won the show for the next six years as well. His streak would ultimately be ended by the late Shawn Rhoden in 2018. Phil then skipped the 2019 Mr. Olympia, but scored a third-place finish in his 2020 comeback.

At 42-years-old, and around twenty years of experience, Phil Heath will undoubtedly be the perfect commentator, since he is familiar with both old-school and modern bodybuilding. Phil also genuinely loves the sport, and it is always interesting to hear someone talk about their interest and expertise. While Phil Heath would be preferred on the stage, without a doubt he would be liked by many as a commentator as well.