Ronnie Coleman Makes ‘No Excuses’ with Latest Workout: ‘When Your Legs Get Numb Riding Incumbent Bike, Use Your Arms’

"The King" was accustomed to adversity throughout his decorated career — "You don’t Win eight Olympia’s by making excuses.. when there’s a will you find a way to get the job done" 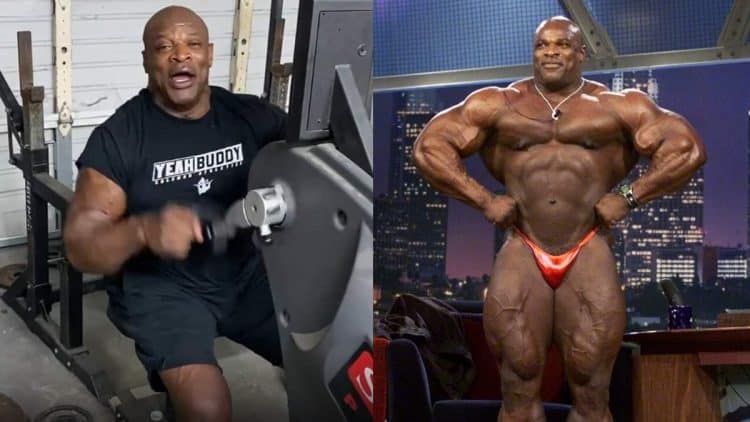 Having led one of the most successful careers in bodybuilding, Ronnie Coleman is a living legend. Despite his feet being numb from countless surgeries, Coleman always finds a way to ‘get the job done’ and used his arms instead of legs on the exercise bike.

Coleman, an eight-time Mr. Olympia, is tied with bodybuilding legend Lee Haney for most Olympia titles ever recorded (8). His rise in the sport was meteoric and he overwhelmed his opponents with jarring size and detailed muscle mass. Throughout his career, the Louisiana native inspired many athletes to reach their goals, including four-time Mr. Olympia Jay Cutler. In 2006, Coleman succumbed to his competition after Cutler brought an undeniable package to Olympia.

In order to maintain a championship-caliber physique, cutting corners was never an option, and the decorated Olympian understood that assignment. According to his rival, Cutler, Coleman trained day or night, regardless of the time, and never made an excuse when it came to cardio. Because of these reasons, the now 58-year-old is admired for his dedication to improvement, even in retirement.

Never making excuses is a cornerstone to Coleman’s success, and he practiced what he preached after stepping away from the sport. In 2019, the legend revealed that his back had been operated on more than ten times. As a result of so many surgeries, Coleman says he can’t get around properly without a wheelchair. Despite his inability to walk unassisted, the former Mr. Olympia doesn’t skip leg day and tries his best even when his feet are totally numb.

Ronnie Coleman Inspires with his ‘No Excuse’ Mentality

In a recent post made to Instagram, Coleman shared a moment of reflection after using his hands instead of his numb feet to complete his cardio training session.

“When your legs get real numb while riding the incumbent bike.

You use your arms as legs because there are no excuses when it comes to doing cardio. When there’s a will you find a way to get the job done.

Coleman attests that ‘determination, dedication, perseverance, passion, and faith’ are all instrumental keys to finding success in a sport as competitive as bodybuilding. Without a doubt, Coleman has made a lot of sacrifices to ensure that he brought the freakiest and most conditioned physique at shows.

In 2001, before he won Olympia that year, Coleman recalled nearly dying from excessive dehydration. While he voiced concern about moving forward at 2001 Olympia, he rehydrated and managed to win the contest in spite of the struggles. In the end, Coleman looks back on his accomplishments with pride but has warned others that ‘this sport is not worth dying for.’

The eight-time Mr. Olympia hasn’t stopped applying the valuable lessons he’s learned throughout his illustrious career, which is evident by his recent workout. Coleman is an inspiration to all bodybuilders and is celebrated for his ‘yeah buddy’ attitude that carried him to the top of the sport.

How Many Calories Does CrossFit Burn?